ATLANTA — Georgia State students soon will be able to get course credit and professional experience while working on a feature project produced by a veteran of film and television, Tom Luse (B.A. ’74, M.S. ’81).

Luse, who made his first film as a thesis project while in graduate school at Georgia State, has gone on to build a storied career with producer credits spanning four decades, including as producer and executive producer from 2010 to 2019 on the AMC phenomenon “The Walking Dead,” which he recently rejoined for its final episodes. 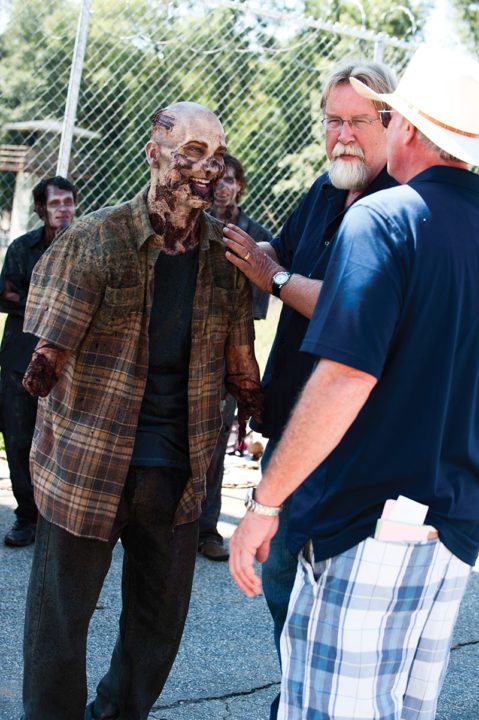 Tom Luse gets his hands on an armless zombie on the set of “The Walking Dead.” Photo by Gene Page/AMC

In 2019, Luse became an artist-in-residence at Georgia State’s Creative Media Industries Institute, which allows students to learn firsthand from mentors in their fields, including giants like Dallas Austin and Chris (Ludacris) Bridges.

In spring 2023, Luse will lead a class of select students across disciplines and across colleges working on-camera and off as part of the cast and crew of a film he co-wrote with Georgia State screenwriting students Malik Jones and Sydney Norman, under the supervision of professor Susan-Sojourna Collier.

Brennen S. Dicker, executive director of CMII, said the film is a collaboration among CMII, the School of Film, Media & Theatre and the School of Music. Students working on the one-semester project will earn 15 credit hours in courses specific to their areas of study, and at the end of the semester have professional credits to add to their resumes.

“We’ve created a curriculum that allows students who are involved in the feature film to have all their classes focused around the feature for that one semester,” Dicker said. “We’re trying to bring 25 to 30 students together and create a project that really immerses them and gives them the real-world experience of shooting a feature film.”

Luse said the project will use emerging technology and new ways of creating content to allow the preparation, filming and post-production to happen all in one semester. Students will be expected to participate in internships or workshops in advance of the class, and they’ll be advised by mentors from the industry.

Susan G. Reid, professor of practice in acting and directing, said students chosen for on-screen parts will be able to enroll in a fall 2022 course focused on the film.

“It’s like an internship but it goes even deeper,” Reid said. “These students will not be assisting, they’ll be doing the work. They’ll be creating the film.”

“We train people who are behind the camera, and we train people who are in front of the camera,” said Greg M. Smith, director of the School of Film, Media & Theatre. “So, we designed this with the ability for students to create their individual path, get the credits they need to stay on track to graduation and have this remarkable experience at the same time.”

Students interested in the project will be able to learn more when Luse visits Georgia State for an information session set for 5 p.m. Oct. 19 at CMII.

“The film is a thriller with a few fascinating twists,” Luse said. “I’m excited to work with Georgia State students both as actors and as crew, and I’m most excited about the innovations in filmmaking that we are going to employ.”