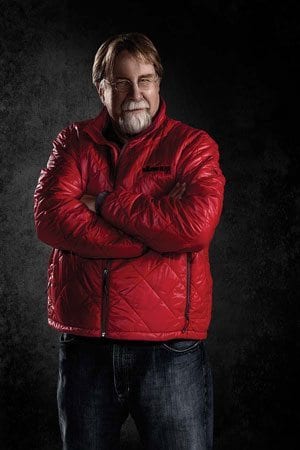 SENOIA, Ga.— This town loves the undead. So much so that when AMC’s post-apocalyptic megahit, “The Walking Dead,” is filming here, residents and business owners clear out for days at a time and deliberately let their lawns go feral. This handsome little hamlet an hour south of Atlanta is zombie ground zero. Its Main Street was the backdrop for the town of Woodbury — a now-destroyed refuge for survivors of the “zombie apocalypse” that serves as the milieu for the highest-rated cable drama in history.

“The Walking Dead” is big business here and the locals have gone all-in. The walls of Senoia Coffee and Café, for example, are covered in memorabilia from the show, and the restaurant even brews a “zombie” coffee blend.

“I was sitting there, having coffee, and a guy from Finland comes over and strikes up a conversation,” Luse says. “This guy traveled halfway across the world to see where ‘The Walking Dead’ is filmed.”

“For the crew, we’re kind of unaware that this is going on all around us,” he says, laughing. “Then I sit down and watch the show with my kids and they’re on their phones texting and all over social media about what’s happening. It’s really caught on.”

The show, going into its fourth season, is also huge for the state’s growing film industry. Last year, 330 feature films, television shows, commercials and music videos were filmed here. Georgia’s film commission estimates the direct economic benefits of film production in 2012 came to nearly $3.1 billion. Film production in the state provides plenty of work and opportunity for talent on both sides of the camera. The industry has created an estimated 25,000 jobs, according to the commission.

Of course, that wasn’t always the case. When Luse, 62, made his very first film as a student at Georgia State in 1981, Atlanta was a show business outpost.

These days, Georgia State’s popular film and video program prepares students for all angles of work in film. Back when Luse was on campus, students interested in studying communications, including journalism and film students, were in what was then called the College of Public and Urban Affairs. They received a degree in urban studies with a concentration in communications. Luse, who earned a degree in psychology in 1974, had returned to academia in the late ’70s to continue his studies, but a conversation with communications professor and Atlanta Film Festival co-founder Kay Beck changed his direction.

“I perceived an artistic interest, maybe even passion,” says Beck, now the director of Georgia State’s Digital Arts and Entertainment Laboratory. “I suggested he try filmmaking, and quite honestly, he took it from there.”

So instead of pursuing a graduate degree in psychology, Luse entered the master’s of urban studies program and became one of Georgia State’s first film students.

“I’ve always been a big film fan, and as a student I was becoming more and more interested in it,” Luse recalls, adding that he worked with the long-running Lyceum Film Series, a makeshift film club run by students that screened art house films in rooms across campus.

As a graduate student, Luse produced a handful of short academic documentaries and commercials, he remembers.

“I had a fantastic graduate school experience,” he says.

But to earn his master’s degree, he had to complete a master’s thesis, a hefty writing requirement.

“I didn’t want to write a paper,” Luse says. “So I went to [Department Chair] Harvey [Newman] and said, ‘Why don’t you let me make a film instead?’”

Newman, it turns out, had just the project. He was campaigning against a sales tax referendum proposed by then-Mayor Andrew Young (who, a few years later, would become the namesake for Georgia State’s policy school where Newman is still on the faculty).

“My perspective [on the sales tax increase] was the regressive impact on the city’s low-income residents, and we were beginning the process of fighting it,” Newman remembers. “Right around that time, in walked Tom, and I told him, ‘Have I got something for you.’”

Newman asked the young filmmaker to create a political advertisement and film a handful of economic and policy experts objecting to the referendum on camera.

“But instead of filming these ‘talking heads’ like I had in mind, he wrote a script for a film noir detective movie,” Newman says. “It was very creative. It’s a well made piece and it showed the promise of great things.”

“Mayor Young understood the big picture better than I,” Newman says. “When we have policy discussions now, Ambassador Young seems so much wiser and I so much more naive. We laugh about our disagreements from back then.”

For Luse, not only did the film help him earn a master’s degree, it became an integral part of his portfolio. “I got the full film experience from writing to posting it, the whole nine yards,” he says.

Luse’s debut caught the eye of the American Film Institute, which awarded him an internship at Paramount Pictures where he worked under Martha Coolidge, the director of cult classics “Valley Girl” and “Real Genius,” and the critically acclaimed “Rambling Rose.” From there, he never looked back. He was in show business, no matter how many hats he was forced to wear.

“I worked as a technician on commercials, as a grip, a crew member, on props,” Luse remembers. “For a while, I was a videographer for the Atlanta Hawks.”

He was also the location manager on 1983’s forgettable “Murder in Coweta County,” starring Johnny Cash and Andy Griffith. The made-for-television movie was the first of several Georgia-filmed motion pictures Luse would work on. He was a production manager on the major motion pictures “Glory,” an Academy Award-winner, “Remember the Titans” and “Drumline.” When things dried up here, he split for Canada for a spell. Then overseas, then to Hollywood, where he was a producer for the horror flick “Jeepers Creepers II.”

“I went where the work took me,” he says.

“Who’s Killing the Cities?” is a 28-minute film made with a lot of help from friends for about $10,000. I remember that at the time, film costs were roughly $1,000 per minute, and Tom Luse wrote, filmed and directed it. It was filmed with grant money I had to do a film about a sales tax increase that Mayor Andrew Young had proposed, and I opposed.

Tom was great to work with, as he is so creative and  bright. We were nearly finished, and I was watching the early version when I asked about a problem that I wondered how we could address in the film. The issue was the interdependence of the Atlanta metropolitan area — if you address a problem in the city of Atlanta, it may cause the same problem to move to the suburbs. Tom went off and thought about it for a day or so, then added a character that never appears on camera, Bernie the Stoolie. Bernie used to run a downtown pawnshop, but moved to the suburbs and opened Bernard’s Bric-a-Brac Boutique. Bernie says, “Who needs cities anyway? Suburbs are where you can live the high life.”

Then, at the end when the mystery of who is killing the cities is being wrapped up by the detective, the phone rings again, and it’s Bernie, whose store has just been robbed, and he wants to hire the detective to solve the crime. In those two phone calls from an off-screen character, Tom addressed the problem of crime moving from the central city out to the suburbs.

I used the film in talks and programs around town before and after the referendum on the sales tax, which the mayor won. I continued to use it in class until 9/11. Personally, I have trouble watching the film now because he included an iconic shot of the twin towers.

Luse was working in Hollywood considering movie productions when he got a call from his agent asking him to meet with representatives from the AMC network. They were hiring a production crew for “some zombie series,” Luse remembers. It was, of course, “The Walking Dead,” based on Robert Kirkman’s graphic novel series.

“I went out the night before, bought the comic books and read them all,” he says.

The network, then known as one that just showed vintage movies, was taking a big chance with a production like “The Walking Dead,” and Luse was intrigued.

“I really liked the project, but I thought the zombie apocalypse would be good for about six or seven episodes,” he says.

Luse signed on and headed back to his old stomping ground, downtown Atlanta, to begin shooting.

“I remember sitting on set of the first episode, and Rick [Grimes, portrayed by actor Andrew Lincoln] is riding his horse through downtown and then he starts killing zombies, and you feel good!” he says. “It was a release. You can always feel good about killing a zombie!”

Luse says that, at that moment, he had a hunch the show would last.

“We have a moral protagonist, Rick, and he has to deal with a world gone mad. How does he do it?” he says.

Spoiler alert: Set in and around a post- apocalyptic Atlanta, Rick and a handful of survivors of a widespread epidemic battle mindless, flesh-eating zombies while navigating a dystopia where those who are still alive are often more dangerous than the undead.

In the show’s four seasons, Luse worked his way up to executive producer. Essentially, he’s the five-star general in charge of the show’s production. It’s Luse’s job to see the overall creative vision is executed.

“Tom Luse has really created the machine that allows this very large show to get made week to week,” says AMC’s Executive Vice President Joel Stillerman.

For Luse to find his biggest career success where it all began for him is particularly rewarding, he says. He and his wife, Carri, live in Inman Park, just a 45-minute drive from Raleigh Studios in Senoia, where the show’s production is filmed. So on Sunday nights at 9 p.m. when “The Walking Dead” hits the air, he’s usually home on the couch watching with his family.

“My kids get tons of street cred,” he jokes.

On a show where hopelessness is the backdrop, and blood, guns and disembodied limbs are commonplace props, Luse says life on set of “The Walking Dead” is really like a family affair.

“I get to work with people I genuinely like everyday,” he says.

The downside to that, he says, is saying goodbye to a familiar cast member who’s met an unfortunate, and usually gruesome, end.

“It really is a shame the way people just die off,” he says with a wry smile. “But that keeps it exciting, challenging. This show is always changing.”

Luse admits he didn’t think he was cut out for life on a television series such as “The Walking Dead,” one that could continue indefinitely.

“Being an old film snob, I thought I was pathologically unsuited for this,” he says. “I need a beginning, a middle and an end.”

For the record, his favorite film is Alfred Hitchcock’s “North By Northwest.”

But Luse says he learned early there is no single path in the film business. And one just needs to look at his career arc to understand that.

Says Beck, the professor who urged him to take a chance and make movies: “He grabbed the opportunities that were available and he created opportunities for himself. His career is a model for how to realize your dream.”

She joined The Home Depot in 1985 as a cashier. Today, she leads a division for the Fortune 500 company.
By Doug Gillett
Sam Massell took a passion for progress and three pieces of paper from Georgia State and helped modernize the city
By Charles McNair