The deadly childhood disease known as rotavirus produces a staggering annual death toll, but Georgia State researchers have just discovered a way to fight it — with bacteria.
Use Scan QR Code to copy link and share it
By Jennifer Rainey Marquez

Every year, more than 200,000 babies and young children around the world die from rotavirus, a highly contagious disease that causes severe diarrhea and dehydration. Rotavirus killed about three times as many children before the introduction of a vaccine in 2006, but there is still no specific treatment for kids who get infected, other than hydration. The vaccine has also proven to be less effective in poor countries, where more children die of rotavirus.

That may change thanks to a new discovery by Georgia State biomedical scientists. In a recent study published in the journal Cell, researchers found one means of preventing and treating rotavirus may lie in your gut. 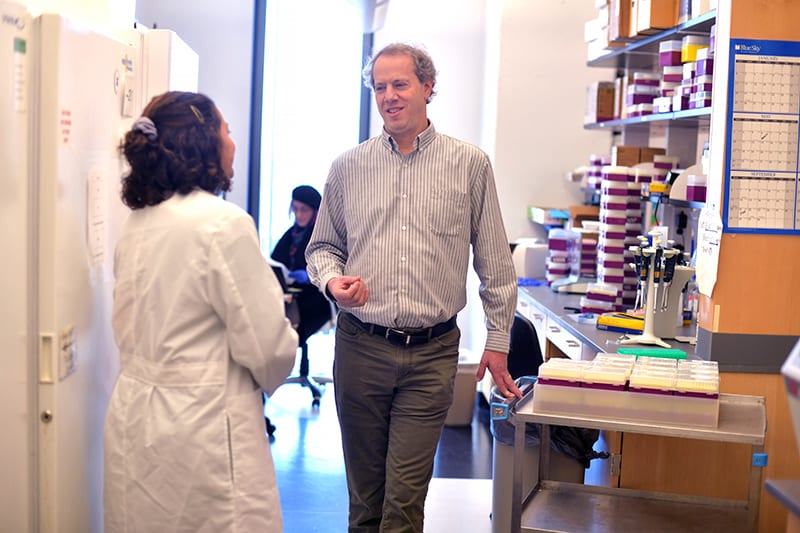 Professor Andrew Gewirtz talks with a researcher in his lab.

The microbiota is the collective term for the invisible ecosystem of bacteria, viruses, fungi and other microbes living inside your body, the largest concentration of which lives in your intestinal tract. Everyone’s microbiota is different, growing and evolving in response to many factors, including genetics, food, medications and more. Scientists have understood the specific makeup of gut flora can influence a person’s susceptibility to bacterial infection. Georgia State researchers have now proven for the first time it affects viral infection as well.

The discovery was serendipitous. While breeding mice, the researchers realized some of them were completely resistant to rotavirus while others were highly susceptible. Upon further investigation, they found the resistant mice harbored a distinct species of bacteria called Segmented Filamentous Bacteria (SFB) in their guts. By transplanting SFB into the susceptible mice, they made them resistant to rotavirus.

The study may also shed light on why some people who contract rotavirus — particularly those in poor regions of India and Sub-Saharan Africa — end up hospitalized while others only experience mild symptoms.

“Even within particular regions, rotavirus ranges from a mere nuisance to a life-threatening disease,” said Andrew Gewirtz, senior author of the study and a professor in the Institute for Biomedical Sciences. “This study shows that microbiota composition is a big determinant of proneness to rotavirus infection.”

While the researchers’ work doesn’t immediately produce a new rotavirus treatment, it may lead to new prevention and treatment strategies. The researchers are now pursuing their theory in collaboration with the Centers for Disease Control & Prevention to study the connection between gut microbiota and sensitivity to rotavirus infection in humans.

An immigrant born in the wake of the Vietnam war, Mai Duong (B.A.S. ’08) has worked her way back to Georgia State as the chef and co-owner of a unique lunchtime spot on campus a decade after graduating.
By Matt Nixon
Winner of the 2019 Sun Belt Cross-Country Championship, runner Lotte Meyberg (B.S. ’21) shines on and off the trail.
By Austin Birchell (B.A. '20)
An improbable journey led Omar Rodriguez (B.S. ’14) to Georgia State, introducing him along the way to not only his bride-to-be, Meredith Steinmetz (M.P.A. ’16), but also a lifelong mentor in Honors College Dean Larry Berman — the officiant of the couple’s wedding.
By Matt Nixon
As assistant vice president of ethics, advanced care planning and spiritual health for WellStar Health System, Jason Lesandrini (M.A. ‘06) helps patients navigate difficult situations for morally optimal outcomes.
By Randy Trammell