An improbable journey led Omar Rodriguez (B.S. ’14) to Georgia State, introducing him along the way to not only his bride-to-be, Meredith Steinmetz (M.P.A. ’16), but also a lifelong mentor in Honors College Dean Larry Berman — the officiant of the couple’s wedding.
Use Scan QR Code to copy link and share it
By Matt Nixon

Since they first met in 2012, Omar Rodriguez often had to ponder the difficult questions Honors College Dean Larry Berman asked him. Berman had taken Rodriguez under his wing — not just as a professor but as a mentor and friend — and liked to challenge his protégé to weigh carefully his choices about his school work, career, future and life. 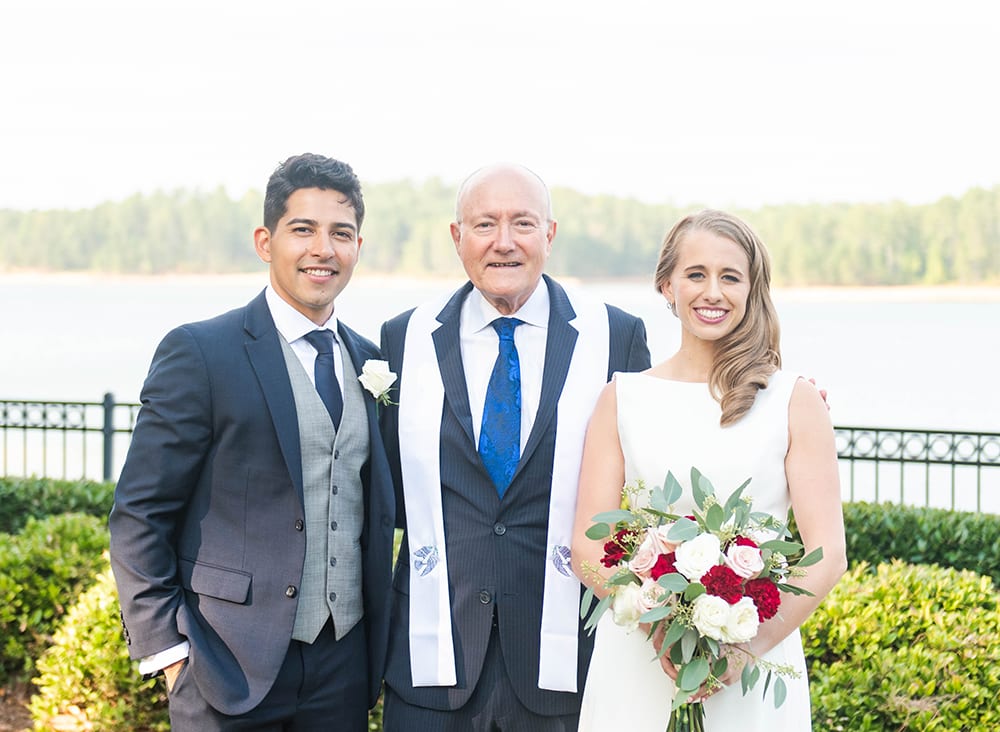 Larry Berman, dean of the Honors College, moments after officiating the wedding of his former student, Omar Rodriguez, and his bride, Meredith Steinmetz. Photo by David and Meivys Suarez of M. Suarez Photography.

For Rodriguez, one of Berman’s questions particularly stands out. It was this past October. Berman, with a glinting Lake Alatoona behind him and a blue October sky dappled with clouds overhead, asked Rodriguez the most important question of his life.

This one was a no-brainer.

“Will you repeat after me?”

“I, Omar, take you, Meredith to be my wife, my friend, my faithful partner and my love from this day forward.”

Berman completed the vows, Rodriguez and his bride-to-be, Meredith Steinmetz (M.P.A. ’16), each assenting and uttering the sacred words: “I do.” After they exchanged rings, Berman invoked the authority vested in him by the State of Georgia to pronounce them husband and wife.

Born in Mexico, Rodriguez moved with his family to Marietta, Ga., when he was in the third grade. While he was a decent student, he knew he’d struggle in college. He also knew he couldn’t pay for it, so he enlisted in the Georgia Army National Guard.

GI Bill in hand, he enrolled at Georgia Perimeter College in fall 2008. He started out in remedial classes while he worked part-time for a company’s billing department, devoting one weekend each month to active duty for the Army National Guard. After two years, he accrued enough credits to qualify as sophomore student and was ready to transfer to Georgia State.

“I started at Perimeter because the environment there was set up to help people like me: nontraditional, part-time, first-generation students who come from low-income backgrounds,” Rodriguez said.

Spring 2011 was Rodriguez’s first semester at Georgia State as well as his first semester as a full-time student. The classes were tough, but for the first time in his life, he made straight A’s. In the fall, he took his first honors class and was accepted in the Honors College.

“I loved the academic rigor of that class,” said Rodriguez. “I wanted more.”

The next year, he met Berman, who helped him apply for a prestigious summer internship with the Community Development Financial Institutions Fund in Washington, D.C. Just a few years removed from taking remedial classes as a part-time student at Perimeter College, he got the job.

“I was immediately impressed with Omar,” said Berman. “He was bright, engaging. He has gravitas.”

Rodriguez and Steinmetz started dating in 2009 when she was an undergrad at Kennesaw State University and Rodriguez was studying at Perimeter.

“Omar thrived at Georgia State,” Steinmetz said. “Omar spoke so highly of the school and faculty that I knew I wanted to go there for my master’s.”

Steinmetz earned her master of public administration degree from the Andrew Young School in 2016. The day of her commencement — May 7, 2016 — was a busy one: She accepted her diploma that morning, and Rodriguez proposed to her that night. She accepted that, too.

The couple moved to New York City in 2017 for Rodriguez to start his master’s program in economics and education at Columbia University. Berman was among the first people Rodriguez invited once he and Meredith set their wedding date, but Rodriguez never expected the dean’s offer to officiate.

While he had officiated the wedding of just one other former student, Berman, who was ordained online, says the offer was natural.

“Officiating Omar’s wedding was like officiating a wedding for a family member,” he said. “My own mentor taught me that, when you meet students like Omar, students you really believe in, you don’t let them go. You stay in touch.”

Rodriguez received his master’s degree from Columbia in the spring of 2019 and soon accepted a job back in Atlanta as a budget and policy analyst for the Board of Regents of the University System of Georgia.

“Dean Berman saw the amazing, thriving person Omar is and believed in him,” said Steinmetz. “That doesn’t happen often, especially for young men of color. Having him there — this pillar for Omar — as I walked down the aisle … that moment was perfect and exactly what I wanted it to be.”

As assistant vice president of ethics, advanced care planning and spiritual health for WellStar Health System, Jason Lesandrini (M.A. ‘06) helps patients navigate difficult situations for morally optimal outcomes.
By Randy Trammell
The deadly childhood disease known as rotavirus produces a staggering annual death toll, but Georgia State researchers have just discovered a way to fight it — with bacteria.
By Jennifer Rainey Marquez
An immigrant born in the wake of the Vietnam war, Mai Duong (B.A.S. ’08) has worked her way back to Georgia State as the chef and co-owner of a unique lunchtime spot on campus a decade after graduating.
By Matt Nixon
Winner of the 2019 Sun Belt Cross-Country Championship, runner Lotte Meyberg (B.S. ’21) shines on and off the trail.
By Austin Birchell (B.A. '20)