In winning November’s 5K conference championship, cross-country runner Lotte Meyberg beat the second-place finisher by 15 seconds. The victory marked the third in a row for Meyberg, a native of Büettelborn, Germany, who made her second home at Georgia State so she could study in the U.S. as an international athlete.

“Moving here was very overwhelming at first,” she said. “It was a much different culture than I’m used to in Europe. But it was also very welcoming, and I was able to feel comfortable.” 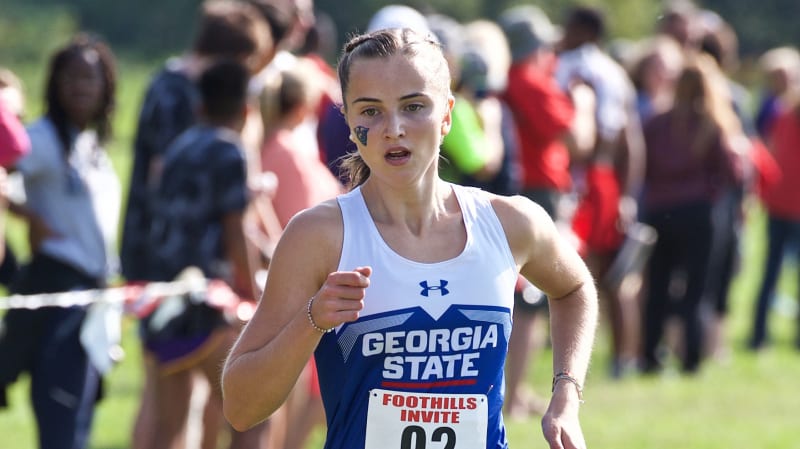 When Meyberg began running for Georgia State, she was competing in 800- and 1,500-meter races, but she quickly realized she performed better on longer runs. She transferred to 3K and 5K races and started finishing with higher marks and setting personal bests.

During the cross-country season, she was named Georgia State’s Student-Athlete of the Week three times. And after her victories in a pair of track and field events — 3,000- and 8,000-meter races — in the Samford Invite Jan. 16-18, she earned a fourth Athlete-of-the-Week nod.

The third-year nutrition major has been as committed to her studies as she has to her athletic career. She made the President’s List this past spring, was named the 2019 Sun Belt Women’s Runner of the Year and is a two-time Google Cloud Academic All-American, an annual award given by the College Sports Information Directors of America to 50 student athletes per sport in each NCAA division.

“School has always been really important to me,” Meyberg said. “I like to know that I’ve done my best at whatever I’m working on.”

With her string of impressive victories, including the conference championship, Meyberg looks to continue her successful campaign at NCAA South Regionals next March.

“You never know what’s going to happen at a race because every team is preparing to win just like you,” Meyberg said. “I’m just really excited to see what I’m capable of.”

The deadly childhood disease known as rotavirus produces a staggering annual death toll, but Georgia State researchers have just discovered a way to fight it — with bacteria.
By Jennifer Rainey Marquez
An improbable journey led Omar Rodriguez (B.S. ’14) to Georgia State, introducing him along the way to not only his bride-to-be, Meredith Steinmetz (M.P.A. ’16), but also a lifelong mentor in Honors College Dean Larry Berman — the officiant of the couple’s wedding.
By Matt Nixon
An immigrant born in the wake of the Vietnam war, Mai Duong (B.A.S. ’08) has worked her way back to Georgia State as the chef and co-owner of a unique lunchtime spot on campus a decade after graduating.
By Matt Nixon
As assistant vice president of ethics, advanced care planning and spiritual health for WellStar Health System, Jason Lesandrini (M.A. ‘06) helps patients navigate difficult situations for morally optimal outcomes.
By Randy Trammell