An immigrant born in the wake of the Vietnam war, Mai Duong (B.A.S. ’08) has worked her way back to Georgia State as the chef and co-owner of a unique lunchtime spot on campus a decade after graduating.
By Matt Nixon

Serving quick, authentic Vietnamese food, Pho King Express on Park Place is one of the newest and most popular additions to Atlanta’s downtown lunch scene. In addition to staples like banh mi, the restaurant offers many vegetarian options as well — a rarity for Vietnamese cuisine.

It’s also run by the daughter of a CIA spy. 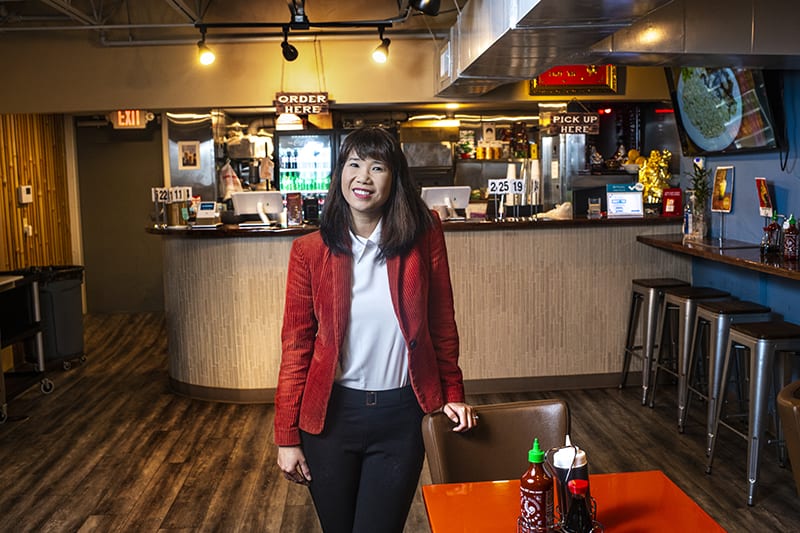 Mai Duong moved from Vietnam to the U.S. with her family when she was 13, fleeing the Communist regime that had taken control of their country 20 years earlier. Duong’s father, a Vietnamese civilian, worked for the CIA during the Vietnam War, for which the new government imprisoned him for more than six years.

Intending to create a new life for themselves, they came over through the United Nations’ Orderly Departure Program, which helped nearly 500,000 Vietnamese citizens resettle in America in response to the refugee crisis that had arisen after the fall of Saigon in 1975.

After a brief stay in Atlanta, the family relocated to nearby Morrow, Ga. She learned to cook Vietnamese food from her family, a hobby that barely simmered until she came to Georgia State.

“A group of friends at Georgia State introduced me to vegetarianism,” Duong said. “Not many people know how to cook vegetarian Vietnamese food, so I just had to figure it out myself.”

In 2009, Duong began attending a Buddhist temple in Lake City, Ga., and soon took up the weekly task of cooking for about 40 people. While it was a labor of love, it also showed her the power of food to unite people together.

“I really valued the sense of community,” Duong said. “It’s so rewarding to help others by feeding them and teaching them how to prepare healthier versions of their favorite dishes.”

After graduating from Georgia State, Duong took a job as the payroll accountant and truck dispatcher at a company owned by a friend she met at the temple. A year later, she went out on her own, starting the trucking company Lotus Carriers LLC.

However, she never quit honing her vegetarian take on Vietnamese food and sharing her creations at the temple. It was there she met Khoa Vuong, the owner of the Pho King location in Midtown. He offered Duong the chance to learn the restaurant business before she fully committed herself to pursuing her dream of opening her own Vietnamese restaurant.

After working together for two years, Duong and Vuong decided to open a new location. Duong knew exactly what part of the city she wanted to serve.

“I built Pho King Express to give Panthers a comfortable place to get fresh, healthy food,” she said. “This is like my second home.”

As assistant vice president of ethics, advanced care planning and spiritual health for WellStar Health System, Jason Lesandrini (M.A. ‘06) helps patients navigate difficult situations for morally optimal outcomes.
By Randy Trammell
Winner of the 2019 Sun Belt Cross-Country Championship, runner Lotte Meyberg (B.S. ’21) shines on and off the trail.
By Austin Birchell (B.A. '20)
An improbable journey led Omar Rodriguez (B.S. ’14) to Georgia State, introducing him along the way to not only his bride-to-be, Meredith Steinmetz (M.P.A. ’16), but also a lifelong mentor in Honors College Dean Larry Berman — the officiant of the couple’s wedding.
By Matt Nixon
The deadly childhood disease known as rotavirus produces a staggering annual death toll, but Georgia State researchers have just discovered a way to fight it — with bacteria.
By Jennifer Rainey Marquez