They wheeled him into the hospital with life-threatening injuries, his arms and legs paralyzed. Breathing through a ventilator, the patient could still move his head and talk. He pleaded with the doctors, the nurses, his mother and anyone within earshot, “I don’t want to live like this. Take me off the ventilator and let me go.”

Believing the patient could survive, though paralyzed, the surgeon found himself at a moral crossroads. He called in Jason Lesandrini (M.A. ’06) for backup.

Lesandrini, a certified healthcare ethics consultant (HEC-C), spent hours with the patient and his family. He brought in another man who had been paralyzed in a similar accident to share how he’d adapted.

A few hours later, the patient called to say he’d reconsidered. He wanted to live.

“I needed time to think,” the man told Lesandrini. “I just had to process all of this. You really listened to me, and I needed that so much.” 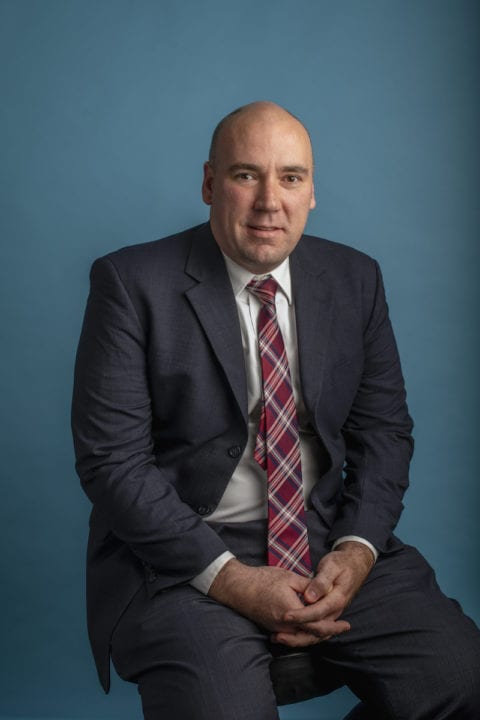 Lesandrini says listening is his most important job. He’s worked for more than a decade in healthcare ethics, which combines medicine with his love of teaching and philosophy.

Lesandrini has had his share of personal run-ins with end-of-life decision-making. In 2007, while working at the Veterans Health Administration, Lesandrini got word that his father was gravely ill. He and his sister were forced to decide whether or not they should discontinue life support measures. That’s when Lesandrini says he realized there were very few resources available to help families cope in such situations.

Lesandrini soon became a Religion and Public Life Fellow in the Department of Religious Studies at Georgia State, where he helped establish the WellStar Fellowship to prepare more people to work in healthcare ethics. The fellowship program supports master’s students preparing for work in the field by grounding them in religion, ethics and cultural literacy.

At WellStar, Lesandrini helps the health system deliver on its mission to provide compassionate, high-quality, patient-centered care by identifying, resolving and proactively addressing ethical issues. His unique role is to advise on ethical matters, like end-of-life choices and issues of patient respect.

“This field is starting to blossom into something much larger, and I feel I’m in a place to really make a difference,” he said.

Lesandrini oversees WellStar’s department of Spiritual Health as well as a team that assists patients with documenting their preferences when they cannot speak for themselves. He also manages a team of five full-time ethicists — a number that puts WellStar in the company of the Cleveland Clinic and Mayo Clinic. Most medical organizations have a volunteer ethics committee or employ part-time staff to deal with issues on a case-by-case basis.

Looking at a patient’s situation holistically is vital to working through moral issues. Lesandrini’s team addresses the array of ethically charged uncertainties and conflicts that arise daily.

“There are no ethics-free zones in healthcare,” Lesandrini said. “It affects everything we do and almost every decision we make.”

He recalls one particular conflict in his career. The patient was a roofer who had suffered a stroke and lost sight in one eye. After being released from the hospital and recovering for a few weeks, the man said he intended to return to his job, which involved operating nail guns and other construction equipment.

Given the patient’s compromised vision, the hospital staff feared the man would injure someone while on the job, and they debated whether or not they had a moral responsibility to protect the man’s co-workers. But there was also a dilemma about how the man would support his family without work and if intervening would violate his right to medical privacy.

Lesandrini called a meeting with the clinical team, the roofer and the roofer’s family.

“We had a heart-to-heart and really just laid it on the line,” Lesandrini remembered “I asked the doctor, ‘Can you tell us what you’re worried about in a way that he can hear it?’”

And then things changed. The patient said he hadn’t realized he might put others in danger. He followed up with his employer, who helped him find a new role that wouldn’t require operating power tools.

Lesandrini and his team do not regard themselves as “the moral police.” They’re there to help articulate all sides of an argument so that patients and hospital staff understand one another. The explanation is simple, though the job is anything but.

“We help teams come to ethically optimal decisions,” he said.

The deadly childhood disease known as rotavirus produces a staggering annual death toll, but Georgia State researchers have just discovered a way to fight it — with bacteria.
By Jennifer Rainey Marquez
An improbable journey led Omar Rodriguez (B.S. ’14) to Georgia State, introducing him along the way to not only his bride-to-be, Meredith Steinmetz (M.P.A. ’16), but also a lifelong mentor in Honors College Dean Larry Berman — the officiant of the couple’s wedding.
By Matt Nixon
Winner of the 2019 Sun Belt Cross-Country Championship, runner Lotte Meyberg (B.S. ’21) shines on and off the trail.
By Austin Birchell (B.A. '20)
An immigrant born in the wake of the Vietnam war, Mai Duong (B.A.S. ’08) has worked her way back to Georgia State as the chef and co-owner of a unique lunchtime spot on campus a decade after graduating.
By Matt Nixon