Lee Thomas (M.A. ’91), head of the Georgia Film, Music & Digital Entertainment Office since 2011, is a big reason why the state is a top spot for film and TV.
Use Scan QR Code to copy link and share it
Interview by William Inman (M.H.P. '16)

It’s a safe bet the famously devout former President and Georgia Gov. Jimmy Carter averted his eyes during a few scenes of “Deliverance,” the 1972 blockbuster filmed in his home state. But its economic impact was something he couldn’t ignore. A year after its release, Carter, then governor, created the state’s film office to lure Hollywood to the Peach State. 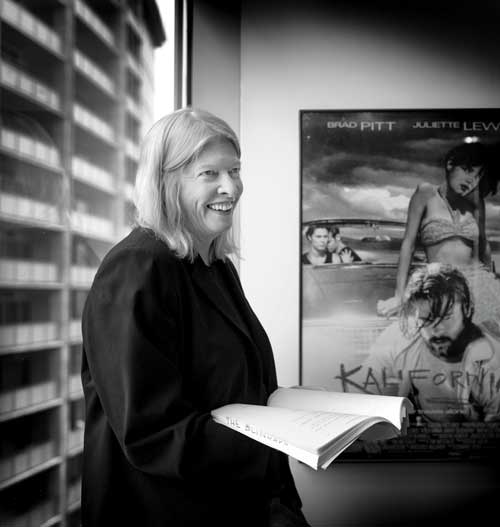 It brought results. Some of the memorable flicks filmed here include “Deliverance” star Burt Reynolds’ “Smokey and the Bandit” as well as “Driving Miss Daisy,” “Kalifornia” and “My Cousin Vinny.” In 2008, when the state passed a tax incentive for the industry, showbusiness in Georgia ratcheted up even more.

These days, more TV shows and movies are filmed on Georgia red clay than ever before. In 2017, the industry had a $9.5 billion impact in the state.

Credit Lee Thomas, deputy commissioner for the Georgia Film, Music & Digital Entertainment Office, for some of that success. She’s been with the office since 1996 and at the helm since 2011. For her work growing the industry here, Georgia Trend named her the 2019 Georgian of the Year.

We spoke with Thomas about her work and the rise of film and TV in Georgia.

Job creation is at the heart of what we do. We work to get film and TV projects to Georgia to keep the industry strong here and create jobs for Georgians. We get scripts, break them down shot by shot and help find locations for shoots.

We also oversee the tax incentive program, and we’re here for logistic support when films are being shot here. So, we’ll take people around to help find locations, stage spaces, office space and equipment suppliers. We’re full service from the time they get started to the time they wrap.

What are some of your duties as deputy commissioner?

Well, it’s pilot season right now, so we’re super busy, and we have a lot of scripts coming in. Our main thing is we make sure that we keep the film tax credit — it’s the main way we’re able to attract projects.

I give a lot of talks and speeches. We want to make sure that all the communities where these projects are being shot feel engaged, and we hope projects will continue to film throughout the state — that’s one of our big missions, too.

You’ve been with the office since 1996. What was life like back before Georgia was such a hotbed for film?

Oh, it was a very different time! We drove all around the state and snapped location photos with 35-millimeter cameras, stuffed them in manila envelopes and FedExed them to the West Coast. The industry here was totally driven by location, so we spent tremendous amounts of time trying to find the perfect place for producers.

In the late ’90s, we started losing business to Canada and other places that passed tax incentive programs for the movies. The icing on the cake was when we lost “Ray,” the Ray Charles story, to Louisiana at the last minute. Ray was a Georgia native, of course. The producers already had offices set up here and everything. Louisiana had just passed a very aggressive tax incentive program, and that was a big wake-up call for Georgia. We passed a revised incentive program in 2008, and that made all of the difference.

Besides the tax incentives, what keeps film projects coming here?

Georgia has the complete package. We have diverse locations, and you can shoot pretty much anything you want here. We have the world’s busiest airport, so travel is easy. We have a lot of infrastructure such as stage space, equipment and lots of talented crew. Students, Georgia State students in particular, are studying film and working in the industry, and that’s really helped to broaden our base.

And it shouldn’t be understated that we have a great quality of life here. People like the restaurants and the hotels. It’s all of that together.

How do we keep the industry going here and attracting more talent?

Organically, because of our success, we’re seeing more and more “above-the-line” people moving here. The cost of living is cheaper than in L.A., and they end up working here constantly anyway. Now, more projects are being developed right here in Georgia that are telling Georgia stories. Unfortunately, people still have to go to the West Coast to pitch them, but they are selling them, so that’s great.

It seems like there are so many stories of people running into big-time movies stars in Atlanta.

We hear it all the time. Once I pulled up to a light, and John Malkovich was just standing there on the street corner.

It’s funny — I remember it was a big deal years ago that Kevin Sorbo (best known for the ’90s television show “Hercules”) was going to be here. And it was a big deal! I remember having to look him up to see who he was, and it was like, “Oh, this is so exciting!” And now, Chris Pratt, Jennifer Lawrence — all these megawatt people are here. You realize how far we’ve come, for sure.