Matt Wilpers (B.B.A. ’06, M.P.A. ’07) is a star cycling coach and fitness instructor for Peloton, the revolutionary tech company with more than a million subscribers.
By Abby Carney (B.A. '08)

After spending a few years in Manhattan high-rises working for KPMG and Goldman Sachs, Matt Wilpers was fed up with his life behind a desk.

“I wanted to be in a career where I was helping people and not just making money,” Wilpers said. 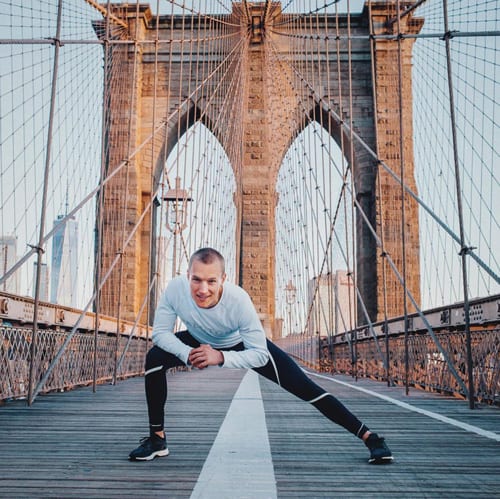 Wilpers on the Brooklyn Bridge.

It’s hard to picture him in this predicament now. Since he became a coach for Peloton — a fitness-oriented tech company with a dedicated cult following — he’s become a celebrity in the fitness world. At the studios where he coaches in New York City, athletes often stop Wilpers with greetings and thanks. He remembers names, doesn’t curse and knows enough science to explain why you’re speeding up a hill or catching your breath — and how you’re going to improve if you follow his lead.

Peloton’s branding has made a star out of Wilpers along with other instructors, all encouraging and dynamic personalities who can get people pumped and engaged — not just those in the studio but thousands more who stream Wilpers’ live and on-demand classes on their Peloton bikes, treadmills or digital apps. Wilpers’ 44,000 Instagram followers consistently leave uplifting comments on his posts. Many of them describe how he’s changed their lives, too.

Wilpers says he just feels lucky to be here.

He’s also fond of the saying “things happen for a reason.” For example, while sports and fitness were long part of Wilpers’ life — he was on the soccer, cross-country and track teams in high school — he thought he would take a break during college to focus on academics. After all, he never imagined he’d make a career out of sports. They were hobbies.

That started to change when former Georgia State men’s cross-country coach John Rowland spotted Wilpers running along the Chattahoochee River trails and invited him to join the university team. He did and ran Division I cross-country and track for Georgia State for four years.

After graduation, Wilpers started competing in marathons until he severely injured his Achilles tendon while training for the Boston Marathon in 2007. This kept him from running for about six months.

So, he traded his running shoes for spin classes — and subsequently, a road bike — and weekend races. He also started coaching others, all while working full time in accounting.

Bike racing then led to triathlons once Wilpers could run again, and his coaching business led him away from accounting. He even introduced his own fitness app, coaching athletes virtually through workouts they could stream on their phones or tablets. While working at a treadmill fitness studio in Manhattan, he landed a gig as a running coach for Lena Dunham, the actress and producer best known as the creator of the HBO television series “Girls.”

When Dunham posted about Wilpers on Instagram and gave him a shoutout on “The Ellen DeGeneres Show,” it was a breakthrough moment for him.

Although Wilpers was still unsure about a career in fitness, Dunham’s influence cemented his shift from crunching numbers to cheering riders up steep inclines.

“A bunch of people came my way after that,” he said. “It was the turning point for my attitude toward fitness. I’d never before considered it as a career option. But once she did that, I thought, ‘Maybe I can do this.’”

It didn’t take long before Peloton approached him about auditioning as a cycling coach. He’s been in the saddle and climbing ever since.

Behavioral scientist Rebecca Wilson's (Ph.D. ’18) rise from poverty helps her fight its worst effects.
By Charles McNair
Lee Thomas (M.A. ’91), head of the Georgia Film, Music & Digital Entertainment Office since 2011, is a big reason why the state is a top spot for film and TV.
Interview by William Inman (M.H.P. '16)
Senior and team captain Malik Benlevi (B.A. ’19) caps a stellar career as one of the top three-point shooters in program history.
By Austin Birchell (B.A. '20)
Georgia State geoscientists dig up a connection between climate change and evolution.
By LaTina Emerson