Artist Shanequa Gay (M.F.A. ’19) created three permanent murals as part of a citywide initiative led by the Atlanta Super Bowl Host Committee and the arts nonprofit WonderRoot. Her mural in the Vine City MARTA station, “Excuse Me While I Kiss the Sky,” is a tribute to homeless teens she met from Covenant House.

Shortly after Shanequa Gay was selected to paint a mural for “Off the Wall,” a public art initiative planned around Super Bowl LIII showcasing Atlanta’s place in the Civil Rights movement and its pursuit of social justice, she met with several homeless teenagers from the Covenant House.

The meeting was part of her creative process as well as part of the message. The project, the work of the arts organization WonderRoot and the Super Bowl LIII Host Committee, brought together a handful of emerging artists to create public art installations in homage to the Super Bowl host city’s movements for justice.

“In Atlanta, we have a chronic homelessness problem — there are people sleeping under bridges, under houses, under trees,” Gay said.

“I was really moved by these young people and their struggles, and I wanted to bring those struggles to light.” 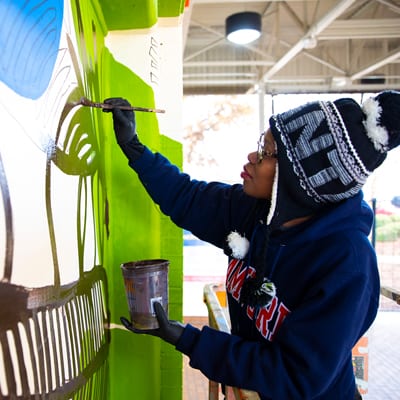 Shanequa Gay (M.F.A. ’19) working on her mural in the Vine City MARTA station.

Gay’s mural titled “Excuse Me While I Kiss the Sky” at the Vine City MARTA station, one of three she created for the project, silhouettes nine of the youths she met at the Covenant House amid flora and flowers native to Georgia. The mural spans the walls and concrete supports in the station.

“I took pictures of the kids and had them make ‘kissy faces’ to create some vulnerability. They were all trying to be super cool,” she said.

On the south-facing side of a warehouse building at the corner of Irwin Street and Boulevard, just north of the Martin Luther King Jr. National Historic Park, is another one of Gay’s murals. Called “Remembering How Sweet Auburn Is,” it’s a patchwork of icons woven together from businesses and organizations on Auburn Avenue during the Civil Rights Movement.

Gay, who will earn her master of fine arts degree this spring, has exhibited her art in the Atlanta Contemporary Art Center, the Chattanooga African-American Museum, the Hudgens Center for the Arts and more, and her work is in the private collections of actor Samuel L. Jackson and former first lady Michelle Obama.

Gay says a focus of her art is “hybridity” — much of it explores social concerns through hybrid forms, such as her well-known “deer people,” mythological forms with the body of a human and the head of a deer.

“Atlanta culture as a whole is a hybrid, and as Americans, we’re all a mesh of things,” she said. “So, these murals all speak to that.”

Below are Gay’s murals on Irwin St. and Edgewood Ave., and “Intercessory Deities,” a part of her 2018 painting series titled “The Devouts.” Keep scrolling for a video produced by Wonderroot that captures the creation of her Vine City MARTA station mural.

Adebola Akinola-Aguda (B.S. ’15) writes programs for robotic systems that solve lots of problems for other people.
By Monica Elliott
Angelina Bellebuono (B.S.Ed. ’92) runs a sanctuary for rescued goats where visitors can come connect with nature — and themselves — to find peace.
By Maya Kroth