Senior and team captain Malik Benlevi (B.A. ’19) caps a stellar career as one of the top three-point shooters in program history.
By Austin Birchell (B.A. '20)

After trailing by 21 points, the Panthers rallied against Alabama last December on the Crimson Tide’s home court. 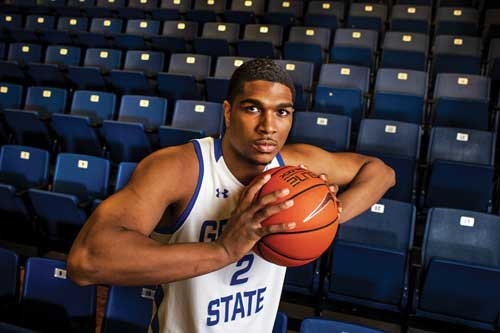 The teams were tied at 80 with just 1.4 seconds left on the clock when Malik Benlevi met the ball along the three-point line and immediately let the shot go. The buzzer blared through the arena as the ball arced through the air and swished through the net.

The entire Georgia State team exploded from the bench and rushed Benlevi in celebration. The next morning, Benlevi’s game-winning shot was the top highlight on ESPN’s “SportsCenter.”

“I’ve wanted to be on ESPN my whole life,” Benlevi said. “It’s one of my biggest accomplishments. I made sure to record it and send it to my mom.”

His mother and family have been behind him all the way, but Benlevi also has received an outpouring of support from his hometown of Savannah, Ga. Benlevi’s following in Savannah makes it seem as though the whole city is behind him.

“As much as they support him here, it is even more impressive how his friends and family show up in Statesboro when we play Georgia Southern,” head coach Ron Hunter said. “It almost gives us a homecourt advantage.”

Benlevi has held the team captain position for two years and will go down in Panther history as one of the program’s top winners and three-point shooters.

“Malik is a leader on and off the court for this team in so many ways,” Hunter said. “He has improved every day since he got here nearly four years ago, and he also works with his teammates to help them improve. Malik is basically an extension of the coaching staff on the court because he knows our system so well, and that is invaluable for a coach.”

If he maintains this level of play, his future is full of possibilities.

“We’ve just got to see how this season goes,’” Benlevi said. “Maybe it’ll be the NBA or overseas. It honestly doesn’t matter to me as long as I’m still playing basketball.”

Behavioral scientist Rebecca Wilson's (Ph.D. ’18) rise from poverty helps her fight its worst effects.
By Charles McNair
Lee Thomas (M.A. ’91), head of the Georgia Film, Music & Digital Entertainment Office since 2011, is a big reason why the state is a top spot for film and TV.
Interview by William Inman (M.H.P. '16)
Matt Wilpers (B.B.A. ’06, M.P.A. ’07) is a star cycling coach and fitness instructor for Peloton, the revolutionary tech company with more than a million subscribers.
By Abby Carney (B.A. '08)
Artist Shanequa Gay (M.F.A. ’19) created three murals as part of a citywide initiative led by the Atlanta Super Bowl Host Committee and the arts nonprofit WonderRoot.
By William Inman (M.H.P. '16)