Professor Vince Calhoun is using data to transform the way we think about mental illness.
Use Scan QR Code to copy link and share it
By Jennifer Rainey Marquez

Mental illness affects about one in five adults in the U.S. Yet despite the best efforts of clinicians, research suggests these disorders are frequently misdiagnosed.

Ten years ago, The Lancet published a meta-analysis of more than 50,000 patients that found physicians correctly identified depression in their patients less than 50 percent of the time. In a study from the year before, researchers at the Alpert Medical School of Brown University found that 57 percent of adult participants who said they had been diagnosed with bipolar disorder did not actually have the disorder. Part of the problem is there’s still so much about the brain that experts don’t know, including how it’s affected by mental health disorders. 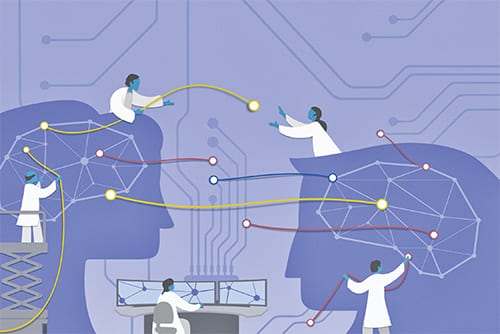 “Scientists have long thought of the brain as a locked black box because it’s so complex and dynamic,” says Vince Calhoun, Distinguished University Professor of Psychology and director of the Center for Translational Research in Neuroimaging and Data Science (TReNDS). “We’re working to remove some of the mystery.”

Working at the intersection of engineering, computer science and neuroscience, Calhoun’s team uses machine learning to pull more and better data from brain imaging scans and create a new picture of what’s happening inside the mind. He has developed algorithms that have strengthened scientists’ understanding of brain function, structure and genomics — and how each is affected by mental or neurological disorders and various tasks.

Earlier this year, Calhoun, who is also a Georgia Research Alliance Eminent Scholar in Brain Health & Image Analysis, received nearly $4 million from the National Institute of Mental Health to develop new models that use data to better predict mental illness.

“Mood and psychosis disorders are incredibly complex and variable, and they’re influenced by a number of interrelated genetic and environmental factors,” Calhoun says. “Two people may have the same diagnosis without sharing symptoms, or they may have the same symptoms with different diagnoses. There is also a growing consensus that we should approach mental illness as a continuum rather than slot patients into all-or-nothing categories.”

By combining brain imaging and genomic data, the researchers will compare the accuracy of two approaches to mental health diagnosis — the standard diagnostic category method, in which clinicians use a checklist of symptoms to assign a diagnosis, and a data-driven method, where experts analyze brain data to determine a diagnosis. They will also evaluate the accuracy of a dimensional approach to diagnosis, which places patients along a spectrum by measuring constructs such as working memory, cognition or emotional reactivity.

“We’re trying to determine which diagnostic approach is best supported by the data as well as which data are most informative,” says Calhoun. “When we answer those questions, we’ll open the gateway to a lot of other insights, too.”

After leading the Panthers in the big win over Tennessee, quarterback Dan Ellington (B.I.S. ’20) aims to get the team back to a bowl game while becoming the best player in the Sun Belt Conference.
By William Inman (M.H.P. '16)
After a successful career in marketing, Steven Lester (B.V.A. ’75) rediscovered his passion for painting. He’s now one of the most celebrated sports artists in the country.
By Jac Kuntz
Delta Air Lines’ manager of international social media strategy and 40 Under 40 honoree Juanita Velez (M.I.B. ’13) has devoted herself to connecting people across cultures with opportunity and community.
By Matt Nixon
As a Clarkston, Ga., city councilwoman, Yterenickia “YT” Bell is leading the charge to connect her town government with the residents of America’s most diverse square mile.
By Matt Nixon