After leading the Panthers in the big win over Tennessee, quarterback Dan Ellington (B.I.S. ’20) aims to get the team back to a bowl game while becoming the best player in the Sun Belt Conference.
By William Inman (M.H.P. '16)

On his first day of class at Georgia State, Dan Ellington got lost.

“This place is big,” Ellington said, laughing. “I’d just gotten here from a small town in Mississippi. I was heading back to my dorm after class and ended up at the CNN Center.”

The senior transfer from Itawamba Community College in Fulton, Miss., (population 3,882) has found his way as the Panthers’ starting quarterback, however, earning an All–Sun Belt Conference nod in his first year with the team.

Ellington ranked third in the conference in passing yards and total offense and was the Panthers’ leading rusher during a disappointing 2-10 season that Ellington says the players have put behind them. 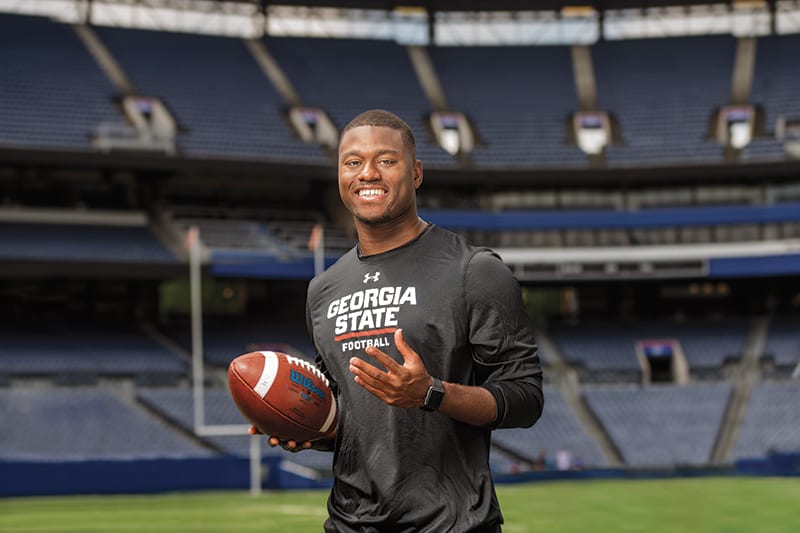 “We all remember the feeling after losing that Georgia Southern game to end the season,” he said. “But there are guys in our locker room who also remember what it was like to win the Cure Bowl, so we know what it feels like to win.

“This time around, there is a different vibe. We’ve all bought in, and we’re all working harder. Our plan is to get back to a bowl game and win our first Sun Belt Championship.”

Ellington has also set a lofty goal for himself going into his second campaign as the team’s signal caller.

“I want to be the Sun Belt Player of the Year,” he said. “My coaches think I can do it, and that was the first thing [head] coach [Shawn] Elliott and [offensive coordinator Brad] Glenn said after spring ball — that there’s no reason I can’t do it.”

He started off the season against Tennessee by throwing two touchdown passes and running for the game-clinching score in the fourth quarter to give the Panthers its first-ever win over a Power 5 opponent. He was named the Sun Belt Offensive Player of the Week after leading Georgia State to its 38-30 victory.

Ellington was a three-star recruit coming out of high school and originally committed to play for conference foe Louisiana–Monroe. He never played a down for the Warhawks, instead opting for junior college where he ranked second in the country in passing yards per game and fifth in touchdown passes. He signed with Georgia State Dec. 16, 2017, the same day the Panthers won their first bowl game.

Elliott believes in his quarterback and says Ellington’s leadership is just as valuable to the team as his ability to get yards on the ground and through the air.

“To be a good quarterback, you have to be a good leader, and Dan is that for us,” Elliott said. “He really loves to play the game. He really works at it, and he’s always got a smile on his face. We’re thrilled to have him as a leader on our team.”

After a successful career in marketing, Steven Lester (B.V.A. ’75) rediscovered his passion for painting. He’s now one of the most celebrated sports artists in the country.
By Jac Kuntz
Going into his fourth decade as the play-by-play man for the Panthers, Dave Cohen (B.A. ’94) recalls some of Georgia State’s biggest sports moments and talks about his status as a superfan of the rock band Kiss.
By William Inman (M.H.P. '16)
Professor Vince Calhoun is using data to transform the way we think about mental illness.
By Jennifer Rainey Marquez
Delta Air Lines’ manager of international social media strategy and 40 Under 40 honoree Juanita Velez (M.I.B. ’13) has devoted herself to connecting people across cultures with opportunity and community.
By Matt Nixon