Delta Air Lines’ manager of international social media strategy and 40 Under 40 honoree Juanita Velez (M.I.B. ’13) has devoted herself to connecting people across cultures with opportunity and community.
Use Scan QR Code to copy link and share it
By Matt Nixon

As the plane descended for landing, 6-year-old Juanita Velez (M.I.B. ’13) drank in Atlanta’s vast, illuminated night sky. It was so different from the one above Medellín, Colombia, the city she and her parents had left behind.

Perhaps it had something to do with the flaming cauldron ablaze in the midst of Atlanta’s fluorescent and neon glow. It was July 19, 1996, the night of the opening ceremony for the Centennial Olympic Games. As the city welcomed thousands of athletes, millions of visitors and television viewers, it also welcomed Velez and her parents to a new life in the U.S. 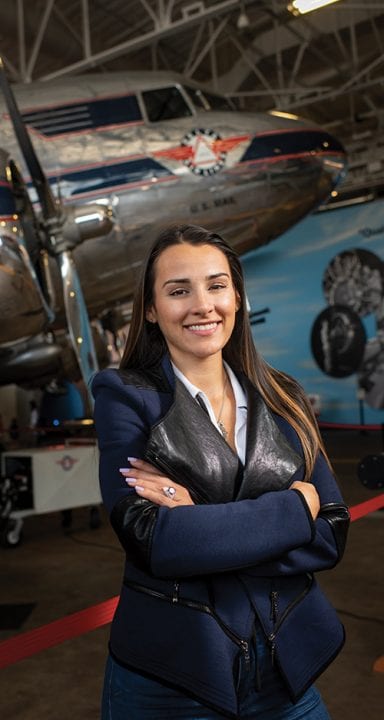 “In Colombia, my parents were professionals, but as immigrants, they had to drop their professions at the airport,” said Velez. “I saw firsthand how difficult it can be to live in a new country without any family or social or professional networks, and their sacrifice has fueled my motivation to succeed.”

Now the manager of international social media strategy for Delta Air Lines, she works with local teams across the globe to ensure the company effectively serves its customers through the social media channels they prefer and in the language they speak.

It’s a career path driven by her personal passions for connecting people across cultures to enterprise, opportunity and community.

“Social media is very different in every country,” said Velez. “For example, throughout Asia, people use social media to live every component of their lives — from paying rent to purchasing tickets to posting their pictures. One thing about it stays the same, though, no matter where you are: its power to bring people together, just like Delta does.”

“At Delta, I get to work in an international, creative and entrepreneurial capacity for a company that is intentional about diversity, inclusion, global commercialization and authenticity,” said Velez. “My job requires me to move quickly and adapt while giving me an opportunity to exercise my entrepreneurial muscles.”

Velez discovered a love for entrepreneurship when she co-founded a dental equipment exporting company shortly after graduating from college. Her experience as a Latina entrepreneur led her to pursue a career working with people in international markets. It also motivated her to apply for Georgia State’s master of international business degree program.

“At HYPE, we’re providing multicultural, next-generation leaders with much-needed access to professional and community spaces, inviting them to tables they’ve never sat at before, and bringing our Atlanta and Georgia communities together for a common cause,” she said.

It’s been 23 years since Atlanta welcomed Velez and her family to their new home. Her accomplishments in that time — entrepreneur, industry star, community leader — earned her a place among the 2019 class of the Alumni Association’s 40 Under 40, which celebrates Georgia State’s most influential and innovative alumni under 40 years of age.

Today, the Colombia native and her fiancé, Helio Bernal, are settling into their new home in Atlanta’s Mozley Park neighborhood and preparing to open Bernal’s new Mexican restaurant and bodega, D Boca N Boca, on Georgia Avenue in Summerhill.

After a successful career in marketing, Steven Lester (B.V.A. ’75) rediscovered his passion for painting. He’s now one of the most celebrated sports artists in the country.
By Jac Kuntz
Professor Vince Calhoun is using data to transform the way we think about mental illness.
By Jennifer Rainey Marquez
After leading the Panthers in the big win over Tennessee, quarterback Dan Ellington (B.I.S. ’20) aims to get the team back to a bowl game while becoming the best player in the Sun Belt Conference.
By William Inman (M.H.P. '16)
As a Clarkston, Ga., city councilwoman, Yterenickia “YT” Bell is leading the charge to connect her town government with the residents of America’s most diverse square mile.
By Matt Nixon