Going into his fourth decade as the play-by-play man for the Panthers, Dave Cohen (B.A. ’94) recalls some of Georgia State’s biggest sports moments and talks about his status as a superfan of the rock band Kiss.
Use Scan QR Code to copy link and share it
By William Inman (M.H.P. '16)

Dave Cohen can easily remember the first call he made for Georgia State — an exhibition game between the men’s basketball team and a Canadian national team at the Cobb County Civic Center in 1983. 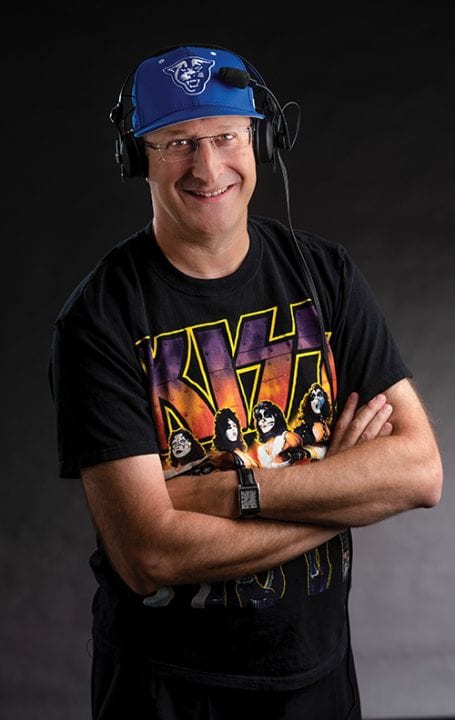 The Voice of the Panthers for the past 37 years. Photo by Meg Buscema.

“I remember setting up on the concourse of the arena because we couldn’t broadcast from courtside,” Cohen said. “But honestly, I can’t remember who won.”

Forgive the longtime radio announcer for forgetting that particular outcome. Cohen is going into his 37th year as the “Voice of the Panthers” and has called hundreds of basketball and baseball games and every down of Georgia State football. He’s provided the soundtrack for the biggest moments in Georgia State sports — the 1991 win over Arkansas-Little Rock that sent the Panthers to their first NCAA Tournament, Darryl Cooper’s late 4-point play against Wisconsin in the 2001 Big Dance and R.J. Hunter’s 3-pointer to beat Baylor in the first round of the 2015 NCAA Tournament, a moment now known as “The Shot.”

With a place in the Georgia Radio Hall of Fame, Cohen is the longest tenured broadcaster for a Division I sports team in the state. Alongside his role in the booth, he’s also the university Alumni Association’s communications and website director. His wife Carol (M.S. ’91), a former women’s tennis coach and associate athletic director for the Panthers, is Georgia State’s assistant vice president for university advising. (They met at a conference on campus.)

Cohen is also an author. In 2010, he published “Matzoh Balls and Baseballs,” a book that tells the stories of 17 Jewish former Major League Baseball players.

If you ask him, his passion for Panther sports is only matched by his fondness for a certain makeup-wearing rock ’n’ roll band. Cohen is a bona fide soldier in the Kiss Army and this summer notched his 56th and 57th Kiss concerts.

Below, he shares some of his favorite moments over the years.

You’ve been the Voice of the Panthers going on 37 years now. Were you calling games when you were a student here?

I started doing basketball games in 1983, my first year in school here. I got involved at WRAS the moment I stepped onto campus. That’s a lot of basketball and baseball games — and now football, too. More than 1,000 games.

It’s mind-blowing to think we’re about to go into our 10th season of football. I remember thinking I’d never see a Georgia State football game. I’m thankful to have been a small part of and witness to the growth of this athletics program.

What was your favorite call?

Well, there are some obvious ones: R.J. Hunter’s shot to beat Baylor, Parris Lee’s touchdown — the first in Georgia State football history — or in baseball, the whole weekend at UNC [University of North Carolina] Wilmington in 2009 when we won the conference tournament to secure our NCAA bid. There have been a lot of them, but those stick out.

The most recent one was Malik Benlevi’s 3-pointer to beat Alabama. We were down 21 points at halftime. That was a significant game because, in the history of men’s basketball at Georgia State, we’ve only beaten an SEC [Southeastern Conference] opponent six times. 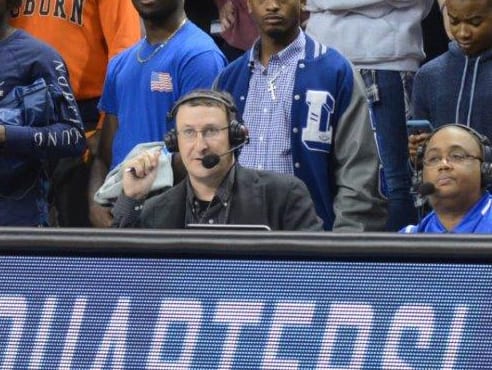 Cohen calls the action during a 2017 game at Auburn.

Have you ever missed a game?

Until the birth of my oldest son, Sam, I hadn’t missed a basketball game since I was a student. He was born in April 2000, and I missed a few games leading up to his birth. But now with the football and basketball seasons overlapping, I’ll miss a trip to California with the basketball team this year because it’s the same weekend in November as our football game versus South Alabama.

You probably know more about the history of Georgia State sports than anyone else. What are some of the best moments from way back when?

Well, speaking of calls and the SEC, there’s one call I wish I still had recorded: Tony Graham’s jump shot in 1984 to beat Tennessee in Stokely Arena in Knoxville.

Technology was a little different back then, and I would have needed to have a tape recorder rolling to catch it. But that was the program’s first signature win.

Going into Tennessee, we were 0-5 and had just lost at Oklahoma and SMU [Southern Methodist University]. As you can imagine, we were not favored … at all. We had never before beaten a Power 5 or SEC team, and that was the first one.

Another big one was when we beat Arkansas-Little Rock in the [Trans America Athletic Conference] tournament at the Edmunds Center in DeLand, Fla., to secure our first-ever NCAA bid. We were 0-16 against them before that game.

Just once. I love baseball, and I really enjoy reading about baseball history and players in the ’50s, ’60s and ’70s — the Mickey Mantles, Joe DiMaggios and Ted Williamses. I’ve also always had an interest in the Jewish players because there have been so few of them and most fans can only name two: Sandy Koufax and Hank Greenberg.

I originally tracked down 17 Jewish former major leaguers and had them tell their stories. I started writing “Matzoh Balls and Baseballs” in 2003 — while working full time and calling games — and I finished and published it in 2010.

Since then, I’ve interviewed six more and am hoping to publish an updated edition. I couldn’t get Koufax — he just doesn’t do interviews at all — but I was able to convince one of Hank Greenberg’s sons to write the forward. 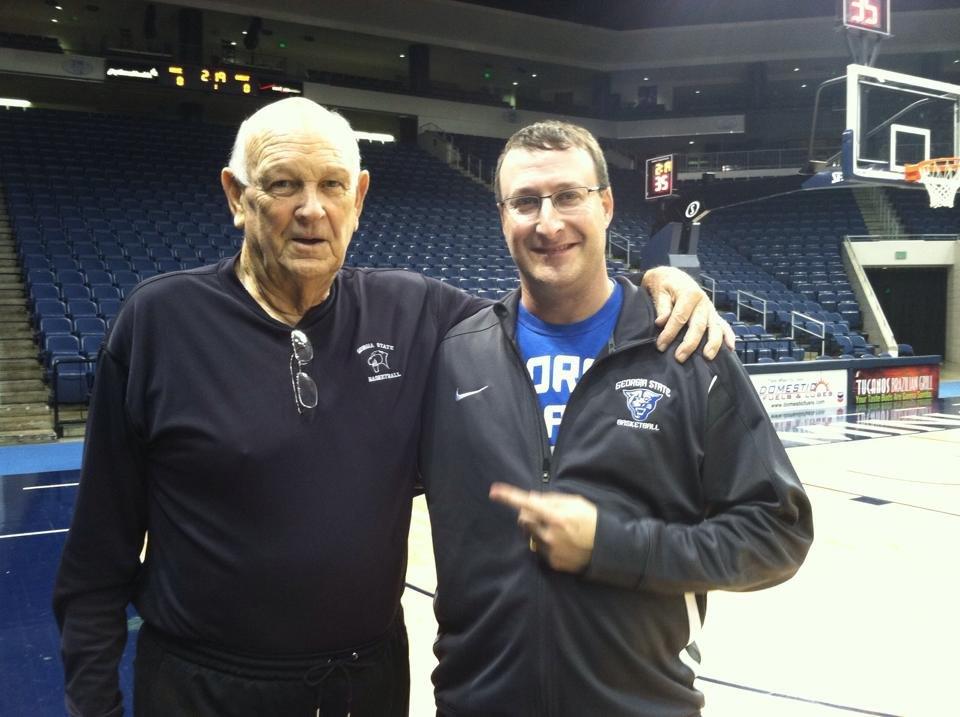 Cohen with former head basketball coach Charles “Lefty” Driesell. The basketball court in the Sports Arena is dedicated to Driesell.

Do you keep up with any former Georgia State players?

Yes, with quite a few. Also, one of the perks of being here for 37 years is that when players come back to campus, I’m sometimes the only one still here they remember. I’ve gotten a call or two from former athletes who had gone to our website, where I was the only name they recognized.

How do you prepare?

I make spot sheets with the names and numbers of players on the depth chart for each team. I’ll research the players for stats and news and write that next to the player. In football, the tough part is spotting, or making sure you name the right person who made the play. We play at Tennessee on Aug. 31 to open the season, and at Neyland Stadium you’re closer to the clouds than the field, so I hope we get all the calls right.

So, how many Kiss concerts have you been to?

I grew up near Boston, and Kiss never played the old Boston Garden when I was a kid because of the fire code — the band uses a good bit of pyrotechnics. I was a huge fan from the first time I saw them on a record cover back in 1975, but my parents wouldn’t take me to see them.

Professor Vince Calhoun is using data to transform the way we think about mental illness.
By Jennifer Rainey Marquez
As a Clarkston, Ga., city councilwoman, Yterenickia “YT” Bell is leading the charge to connect her town government with the residents of America’s most diverse square mile.
By Matt Nixon
After a successful career in marketing, Steven Lester (B.V.A. ’75) rediscovered his passion for painting. He’s now one of the most celebrated sports artists in the country.
By Jac Kuntz
Delta Air Lines’ manager of international social media strategy and 40 Under 40 honoree Juanita Velez (M.I.B. ’13) has devoted herself to connecting people across cultures with opportunity and community.
By Matt Nixon