As a Clarkston, Ga., city councilwoman, Yterenickia “YT” Bell is leading the charge to connect her town government with the residents of America’s most diverse square mile.
Use Scan QR Code to copy link and share it
By Matt Nixon

During business hours, Bell, an honoree of the Alumni Association’s 40 Under 40 class of 2019, runs the Progressive Governance Academy for Re:Power, the Minnesota-based issue advocacy organization. 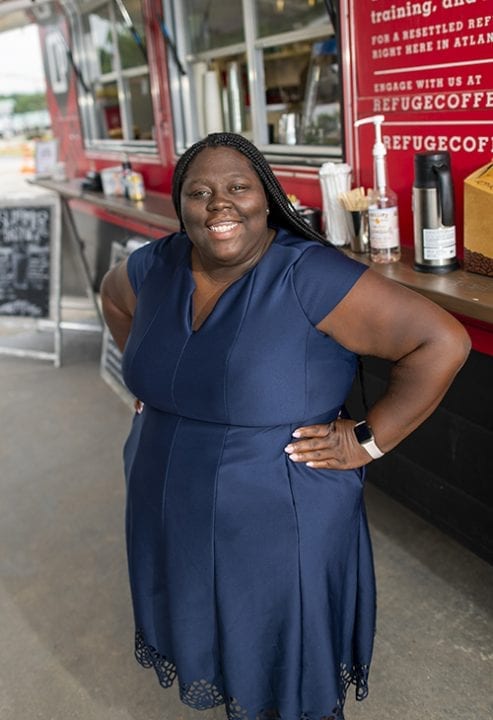 Then, every night from 4–10, she works for the city of Clarkston, Ga., where she serves on the city council and leads committee meetings, workshops, community assemblies and more. These are the building blocks for achieving Bell’s mission to transform Clarkston into a fully inclusive, engaged city with thriving and sustainable businesses.

“I never aspired to be on the front lines of city policymaking,” Bell said. “But I saw firsthand how certain policies and programs failed to address the community’s needs because certain populations simply couldn’t access them.”

Clarkston faces some unique challenges for effectively connecting with its citizens. Known as “the most diverse square mile in the U.S.,” the city was designated a refugee resettlement program in the 1990s. By the next decade, its high school was enrolling students from more than 50 different countries.

Bell’s background in social work gave her special insight into these challenges. For example, when the city council wanted to deny an alcohol sales permit to a new gas station to curb alcohol-related incidents, she knew that strategy was not a solution.

“Many of our people here are immigrants and refugees, and they’ve suffered trauma in dislocation — leaving everything behind, living in a foreign land, not speaking the language, she said. “To truly thrive, a city needs to engage all its citizens and connect them with the social, education and mental health services they need — not just take away a coping mechanism.”

After declining previous requests to run for city council, Bell entered the race and was elected in 2017. She’s joined by three others from her generational cohort, making the Clarkston city council the first millennial-majority government in the U.S., according to mayor Ted Terry.

“It’s my goal to get everyone to the table,” she said. “Education can take a long time and a lot of work, but if you’re not meeting people where they are, they’re not going to get the help they need.”

Bell’s days are usually long and frequently demanding, and progress is often slow with incremental success. Nevertheless, her inexhaustible work ethic and passion for people fuel her during those days.

“Who doesn’t want to educate their community and help people grow?” asked Bell. “That’s the reward.”

After leading the Panthers in the big win over Tennessee, quarterback Dan Ellington (B.I.S. ’20) aims to get the team back to a bowl game while becoming the best player in the Sun Belt Conference.
By William Inman (M.H.P. '16)
After a successful career in marketing, Steven Lester (B.V.A. ’75) rediscovered his passion for painting. He’s now one of the most celebrated sports artists in the country.
By Jac Kuntz
Going into his fourth decade as the play-by-play man for the Panthers, Dave Cohen (B.A. ’94) recalls some of Georgia State’s biggest sports moments and talks about his status as a superfan of the rock band Kiss.
By William Inman (M.H.P. '16)
Professor Vince Calhoun is using data to transform the way we think about mental illness.
By Jennifer Rainey Marquez