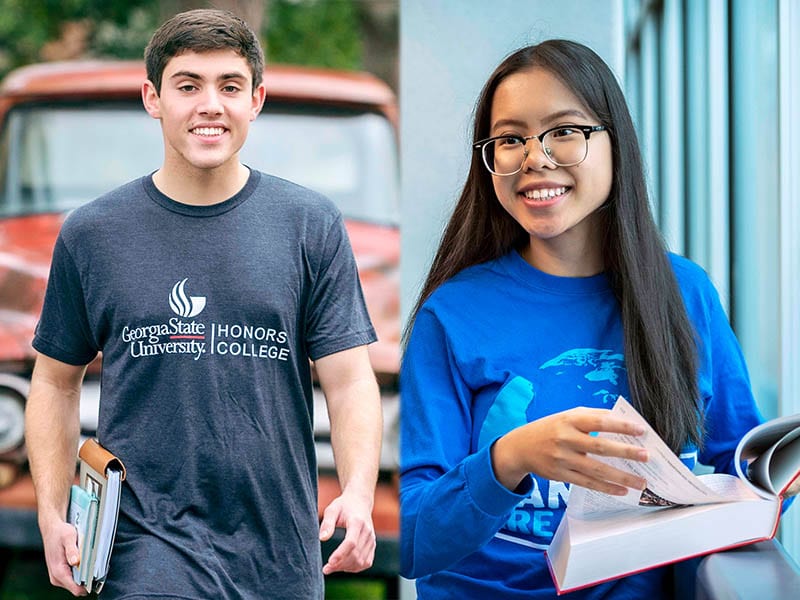 Diana Ha and Matthew Wessler each have been awarded the Jack Kent Cooke Undergraduate Transfer Scholarship to attend the four-year college or university of their choice. Both plan to continue their education at Georgia State’s Atlanta Campus.

The scholarship, designed to help the nation’s top two-year college students seeking to complete their bachelor’s degrees at four-year institutions, provides each recipient up to $40,000 per year for up to three years.

Ha and Wessler, Honors College students at Perimeter, are among 50 students across the nation to receive the highly competitive scholarship. Their selection places them among the top 3 percent of the 1,500 applicants who applied for the national award.

Due to shelter-in-place directives during the COVID-19 pandemic, the students learned of their selection during a surprise video WebEx announcement by Dr. Nancy Kropf, dean of Perimeter College.

“I am shaking, I’m so excited,” Ha said upon learning of the award. “I want to thank the Jack Kent Cooke Foundation for supporting the dreams of so many kids like me — low-income, first-generation students going to college. I have so much relief not having to worry about financial issues now. I’m looking forward to being a part of a community of people at Jack Kent Cooke who can be mentors and guide me through the unknown.”

“You never know if it’ll be you,” Wessler said. “And I didn’t know if it’d be me, so this is a wonderful surprise. I wanted to give a big hug to everyone in this call,” said Wessler. “I’m just feel overwhelmingly happy.”

“It’s going to be a big game changer for you to finish your education and to launch your career,” Dean Kropf told the scholarship recipients. “We couldn’t be more proud of you.”

Ha, of Conyers, studies biology and is the first in her family to attend college. Born with a congenital heart defect, she had two open-heart operations before the age of 20. She maintains a 4.0 grade point average (GPA), volunteers in her community and helps her mother care for her ill father. She plans to transition to Georgia State’s Atlanta Campus to pursue her bachelor’s degree and to one day become a pediatric cardiologist to help children.

The surprise WebEx was not the final surprise involving Ha’s selection.

“I didn’t tell my parents about Jack Kent Cooke, or that I was a semifinalist for the scholarship,” Ha told faculty and staff who joined the virtual meeting. “I like to take the initiative in what I do and tell them when I know that it will be final and confirmed. I don’t want to get their hopes up. I do know they are proud of me, regardless of what I do in my life.”

Wessler, 21, of Woodstock, graduated from Perimeter College in December with his associate degree and is taking classes at Georgia State’s Atlanta Campus, where he is studying actuarial science. While at Perimeter, Wessler earned multiple academic awards, maintained a 4.0 GPA and tutored fellow math students. Though he struggled with drugs as a teen, Wessler now has great hope for his future. His love of math led him to study actuarial science, and he would like to continue his education at Georgia State’s Atlanta Campus.

Upon learning of his selection, he did a “happy dance,” but warned WebEx observers that he does math better than he dances. He looked forward to telling his mother the news.

With the announcement of the two winners, Perimeter College now has 21 students who have received the Jack Kent Cooke Undergraduate Transfer Scholarship since 2002. Past recipients have gone on to pursue four-year degrees at colleges and institutions across the country, including Massachusetts Institute of Technology, Stanford University, Emory University and Georgia Tech. Ha and Wessler are the first two Perimeter recipients to choose to continue their studies at Georgia State’s Atlanta Campus.

Lauri Goodling, Perimeter’s Honors College associate dean, knows this year’s recipients well through their achievements in the Honors College and was thrilled with their selection.

“I’m incredibly proud of these students and grateful for the doors that are now open with the JKC Undergraduate Transfer Scholarship,” she said. “They’ve worked so hard and are very deserving, and I’m overjoyed that they’re being recognized. I can’t wait to see where they go next.”

Scholar selection is based on exceptional academic ability and achievement, financial need, persistence, service to others and leadership. In addition to financial support, scholars receive comprehensive educational advising and the opportunity to connect with fellow Cooke Scholars from across the country.

“We know this is a very uncertain time for many students and their families,” said Seppy Basili, executive director of the Jack Kent Cooke Foundation. “We remain deeply committed to supporting high-achieving community college students to ensure they have the resources to reach their full academic potential.”