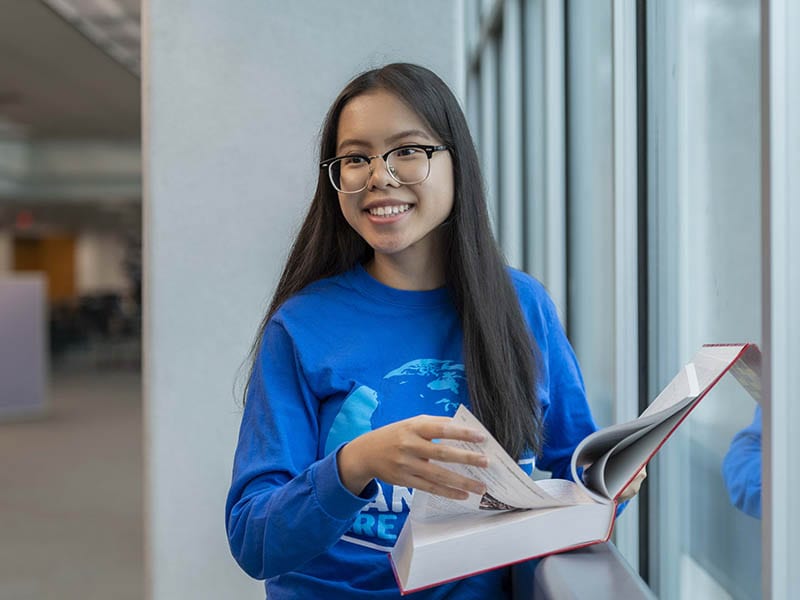 Editor’s Note: The following story was written prior to the announcement of the 2020 winners of the national Jack Kent Cooke Undergraduate Transfer Scholarship. On April 24, the Jack Kent Cooke (JKC) Scholarship Foundation announced that two Perimeter College students, Diana Ha (see below) and Matthew Wessler, were selected as winners of the scholarship, and each will receive up to $40,000 a year for three years to attend the four-year college or university of their choice. Both plan to continue their education at Georgia State’s Atlanta Campus. Read more about our 2020 JKC winners.

Instead of focusing only on her condition, however, Ha, a student at Georgia State University’s Perimeter College, has been inspired to help other children with heart issues by setting her sights on becoming a pediatric cardiologist.

Now, as a semifinalist for the 2020 Jack Kent Cooke Transfer Undergraduate Scholarship, the Conyers resident has a chance of receiving help to follow that dream.

The Jack Kent Cooke scholarship is for the nation’s top community (two-year) college students seeking to complete their bachelor’s degrees at four-year institutions. It provides recipients up to $40,000 per year for up to three years, placing it among the largest private scholarships in the country.

Ha, who is studying biology, is an Honors College student and one of Georgia State University’s Coca-Cola First Generation Scholars as well.

Ha said the combination of abnormalities with which she was born is known as tetralogy of Fallot and hinders blood flow, affecting all four chambers of the heart. Without surgery, patients her age have a 10-15 percent chance of survival.

“Talking with my cardiologist made me understand that adults with this condition didn’t live long, so I am very thankful and blessed that I am here today,” she said.

She anticipates another heart valve surgery in the future to accommodate her continued growth.

“The surgery helps me function properly for the most part,” Ha said. “So far, I have been good enough not to need another (surgery) anytime soon.”

Since middle school, Ha not only has dealt with her own health issues, she has juggled helping to care for her three younger siblings and her father. Her parents are older and immigrated from Vietnam before the children were born, she said.

“I was in elementary school when my dad had a stroke, then he was laid off from his job. Later, he had another stroke while I was middle school and has been staying home ever since,” Ha said.

Her mother works at a nail salon to support the family, she said.

Despite dealing with attention issues as a child, a condition she later learned was caused by her heart problems, Ha did well at Newton County’s Newton College and Career Academy: STEM Institute and graduated at the top of her class.

“It was an important occasion for my parents, especially my mom, that I was the first in our family to graduate high school,” Ha said. “Mom wanted to buy a banner to celebrate; but I told her, ‘let’s wait until I graduate from college.’”

She was accepted at several universities and chose Perimeter College to be closer to her family. At Perimeter, she has continued to excel and has participated in an extensive list of service and student life activities. She took part in the alternative spring break program, Panther Breakaway, where she volunteered with other Georgia State students at the Boys and Girls Club of Greater Washington and Capital Area Food Bank.

“It was my first time flying and my first time going to D.C. — it was a great experience,” she said. “I got to fly for the second time two months later, when I participated in the Multicultural Ecuador study abroad program.”

Ha is actively engaged within her community, especially at her church, the Vietnamese Alliance Church in Conyers, where she is part of the worship, dance and student leadership teams. She is a teacher for children and youth ministries, as well.

Ha volunteers with Envision Atlanta to help refugees in Clarkston and participates in Renew the City to beautify the Clarkston area. She often visits and volunteers at her high school STEM Institute for events such as a recent open house, where she spoke as an alumna guest representative. At Newton County’s (school system’s) Media Festival, she was a timekeeper, moderator and judge for the Reading Bowl Tournament. She also cofounded a volunteer organization at the Newton STEM Institute called STEM STARS, which provides opportunities for STEM Institute students to help in the community.

Ha said it was her pediatric cardiologist, Dr. David Jones, who encouraged her to become a cardiologist.

“He asked me what I wanted to be when I grew up,” she said. “He always checks up on me, and once I started getting into high school, he encouraged me to think about applying for college. He inspired me to become a cardiologist like him.”

Ha has impressed her Perimeter professors at the Clarkston Campus, where she is taking organic chemistry and Biology 2 courses.

“Diana is a very sweet young woman; very humble and hardworking,” said Luise Strange de Soria, her organic chemistry professor. “She writes excellent lab reports and takes obvious care in making sure that everything she wants to say is written clearly and concisely. She always signs her emails ‘warmly’ which is absolutely an extension of her personality — bright, sunny and warm.”

“I don’t want to get their hopes up too much,” she said. “Whenever I apply to scholarships and programs, I prefer not to tell them unless I get it.”

After graduating from Perimeter, Ha plans to continue her studies at Georgia State’s Atlanta Campus.