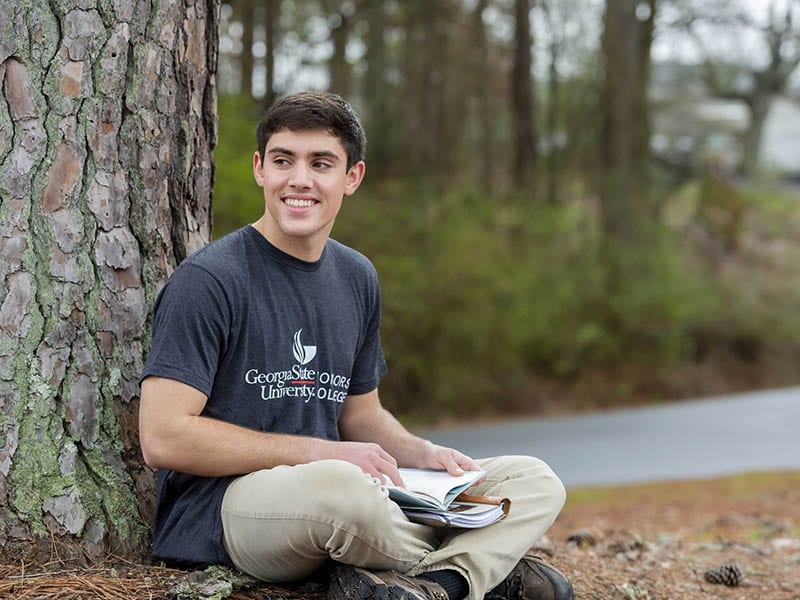 Editor’s Note: The following story was written prior to the announcement of the 2020 winners of the national Jack Kent Cooke Undergraduate Transfer Scholarship. On April 24, the Jack Kent Cooke (JKC) Scholarship Foundation announced that two Perimeter College students, Diana Ha and Matthew Wessler (see below), were selected as winners of the scholarship, and each will receive up to $40,000 a year for three years to attend the four-year college or university of their choice. Both plan to continue their education at Georgia State’s Atlanta Campus. Read more about our 2020 JKC winners.

DUNWOODY, Ga.–Matthew Wessler smiles a lot these days. He’s especially grateful for how his life has changed from an existence centered on drugs into one rooted in achievement and giving back.

Nationally, Wessler is among this year’s semifinalists for the Jack Kent Cooke Undergraduate Transfer Scholarship, one of the country’s most prestigious and generous awards for community college transfer students. The selective scholarship is reserved for top two-year college students seeking to complete their bachelor’s degrees at four-year institutions. It provides recipients up to $40,000 per year for up to three years. The announcement of this year’s scholarship winners is expected in April.

“I consider where I would have been if I had stayed on a path of poor choices, and I am proud of myself for choosing a more enriching life,” the 21-year-old Woodstock resident said.

Once a middle school honors student, Wessler stopped applying himself and started to veer off track during his first year in high school. He said he hung with the wrong crowd, skipped class, regularly smoked marijuana and eventually tried harder drugs, such as LSD.

“It completely derailed me,” he recalled. “I was a complete mess.”

Wessler credits his recovery partly to inpatient therapy, where he learned about behavior and consequences, as well as to his mom’s unconditional support.

“Although she did not always like my behavior, she has always wanted the best for me. She knew that I could become who I am today, even though no one else believed it,” Wessler said about his mother.

“I had all this potential, and I finally realized that I had been wasting it,” Wessler said.

After getting treatment, Wessler went back to school and began pouring himself into positive high school activities and his academics. He got involved with an organization called Friends Club that helps special needs students develop social and job skills. In his senior year, he became president of the Friends Club and passed his three Advanced-Placement (AP) exams with the highest scores.

“I loved teaching Matthew, and probably the best part was reading his essays,” Murray said. “They were brilliant, probing, highly analytical writings.”

Based on his academic performance at Perimeter, Wessler earned several achievements, including being named this March as the Phi Theta Kappa New Century Transfer Pathways Scholarship winner for the state of Georgia. The award reflects his standing as the top-scoring student in Georgia for the 2020 All-USA Academic Team competition.

After graduating from Perimeter, Wessler transitioned to Georgia State’s Atlanta Campus in  January to continue studying actuarial science, a field his mother thought he would enjoy because of his strong math skills. In addition to his classes, he volunteers in the community, currently spending each Friday stocking the shelves at Never Alone, a Woodstock food pantry.

Wessler hopes to become one of this year’s winners. But, for all his academic accolades, he feels most elated about the progress he has made in other areas of his life.

“The thing I am most grateful and thrilled about, though, is that I am happy,” he said. “I love myself, and I feel loved by others; I did not use to feel that way about myself, and if I had continued making bad choices, I never would have left that place.”