Astronomer and Perimeter College assistant professor Jay Dunn helps his students achieve career liftoff by drawing them into research.
Use Scan QR Code to copy link and share it
by Rebecca Rakoczy 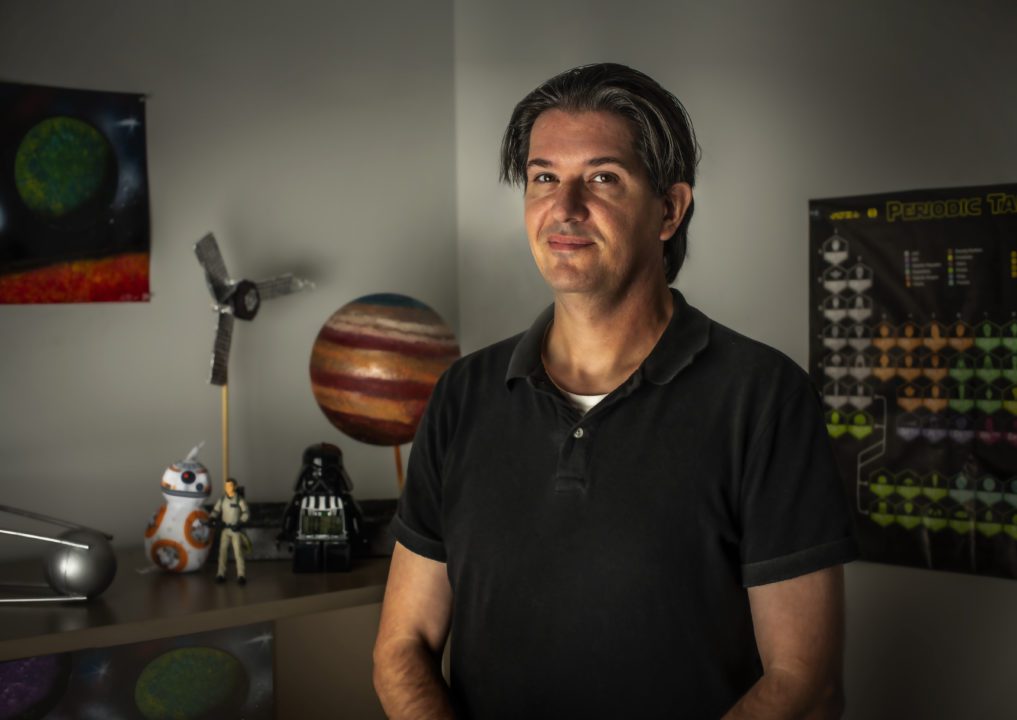 “I think I was five when I first watched Star Wars,” says Jay Dunn, assistant professor of physics at Perimeter College. “From then, I was hooked on studying the stars.”

That childhood fascination propelled Dunn through a doctoral program in astronomy and physics at Georgia State, where he began studying supermassive black holes in Seyfert galaxies, a class of galaxy with a superbright nucleus at its center. It also drives his second passion — drawing students into research.

“I can just say, ‘What is a black hole?’ and everyone is immediately interested,” says Dunn, who is an advisor to the Dunwoody campus SPACE Club and hosts the popular Atlanta Science Festival program “The Astronomy of Star Wars.”

For 10 years, Dunn has recruited his two-year students at Perimeter to join him in research. They analyze data from NASA’s Hubble Space Telescope as well as archival data from the Far Ultraviolet Spectroscopic Explorer, or FUSE, a NASA astrophysics satellite/telescope that stopped transmitting in 2007. Many students have subsequently gone on to pursue their own research and graduate degrees.

“Most of my students — particularly my physics students — are aware of the value of research and know getting their feet wet here is huge for them at this level,” he says. “It will go a long way for recommendations for graduate school, post-baccalaureate work and scholarships.”

Kristin Baker, who started her research on Seyfert galaxies and black holes as a student at Perimeter, recently graduated with her bachelor’s from Georgia State. She’s now in the first year of a doctoral program in astronomy at Indiana University and is co-authoring a paper with Dunn on Seyfert galaxy NGC3783 for The Astrophysical Journal.

Braven Lyall, now a second-year doctoral student in physics at Georgia State, was inspired to do research on black holes while studying with Dunn at Perimeter. Like Dunn, Lyall is a sci-fi fan.

“I was always interested in astronomy — I grew up on Star Trek and Star Wars, and I was in love with the idea of studying other planets,” he says.

When he learned of Dunn’s research on black holes, he began working with him and continued after finishing his associate degree in physics. While earning his bachelor’s degree on the Atlanta campus in the Department of Physics and Astronomy, he did his senior research project with Dunn.

Lyall’s doctoral research at Georgia State is now focused on exoplanets — planets beyond our solar system. And although his research interests have diverged from Dunn’s, they continue to meet to discuss their work almost every week.

While he’s working on his doctorate, Lyall also is looking toward his career. He credits Dunn for inspiring him, both as a researcher, a mentor and as a future professor.

“I want to get my Ph.D. to work with undergrads the way Jay is doing it — helping students get a taste of what real research looks like and sending them on their way to bigger and better things.”