Preventing the Next Pandemic

Preventing the Next Pandemic

Using an innovative strategy he developed against influenza, professor Baozhong Wang is working on a universal vaccine to protect against all coronaviruses.
Use Scan QR Code to copy link and share it
by LaTina Emerson 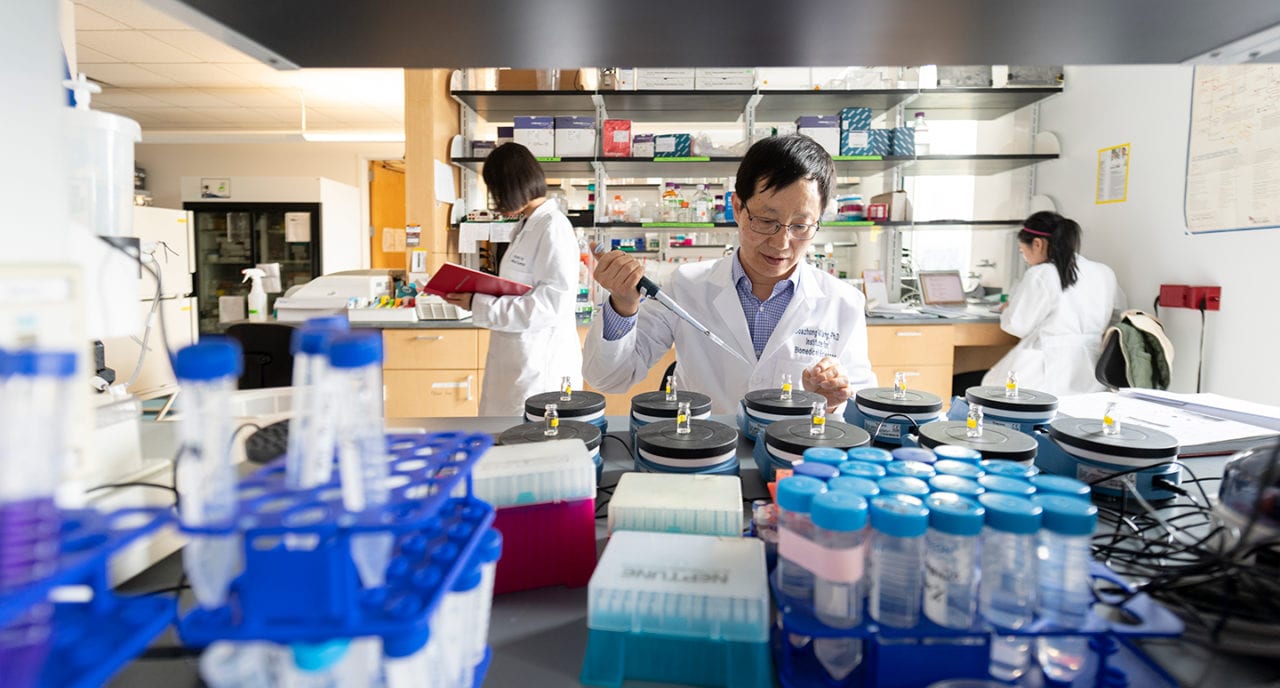 Science is usually a marathon, not a sprint. But with a new, deadly virus wreaking havoc on the world, researchers are working at a breakneck pace to develop an effective vaccine for SARS-CoV-2, one of seven known human coronaviruses, that could end the pandemic and help us regain some sense of normalcy.

There are at least 200 experimental vaccines in various stages of development, and scientists are taking countless approaches. One of the biggest challenges in developing an effective vaccine against SARS-CoV-2 is the virus’s propensity to mutate. The novel coronavirus is what’s known as an RNA virus, meaning its genetic code uses RNA, not DNA, and these viruses are known for quickly evolving and mutating into new strains. Studies already reveal SARS-CoV-2 has mutated into at least 10 different genetic variants around the world, and even if a coronavirus vaccine is developed in the next few months, it may only be effective against the strain or strains that were used in the initial trials.

This propensity for mutation is why seasonal vaccines against the flu, another RNA virus, are often ineffective. Each year in February, six months before flu season starts, the World Health Organization holds a meeting with scientists to forecast which strains of the virus are most likely to circulate later that year. (They make their determination so early to give manufacturers the time they need to produce hundreds of millions of doses.) By the time the new doses are distributed, though, the circulating flu strains may have changed their pattern or accumulated enough mutations reduce the effectiveness of the vaccine.

As a result, the effectiveness of seasonal flu vaccines ranges between just 19 and 60 percent each year, according to the Centers for Disease Control and Prevention. It’s also why you can still get the flu year after year. You might develop immunity against a viral protein one year, but by next flu season the protein would have rapidly changed.

Baozhong Wang, a professor in the Institute for Biomedical Sciences at Georgia State, is taking a broader approach to fighting SARS-CoV-2 using an innovative strategy he created through his research on the flu. He’s working to develop a universal vaccine that could protect against any variants of the novel coronavirus and other genetically similar coronaviruses.

Coronaviruses are named after the spiky proteins that ring their surface like a crown (the word “corona” means “crown” in Latin). SARS-CoV-2 uses its spike proteins to lock onto the surface of human cells and invade them. Once the virus is inside a human cell, it hijacks it, essentially turning the cell into a virus-producing factory. Zeroing in on these spike proteins is the key to making an effective vaccine.

In his work on the flu, which is funded by the National Institutes of Health, Wang has targeted an interior part of the virus’ surface protein that is commonly shared among influenza viruses. (Seasonal flu vaccines target the protein’s exterior head, which varies widely from strain to strain.) These vaccines have shown great potential in inducing broad immune responses, protecting the recipient against all flu viruses.

He hypothesizes that using the same approach — targeting commonly shared antigens from coronavirus spike proteins — will induce the same type of broadly protective immune responses against SARS-CoV-2, any mutations of the virus and other closely related coronavirus strains. To be successful, though, a universal vaccine needs to stimulate the body’s immune system without triggering an overactive inflammatory response that can damage healthy tissue. This balance is particularly delicate given that many COVID-19 patients die from a severe overreaction of the immune system’s inflammatory response known as a “cytokine storm.”