Rewiring the Brains of Stroke Patients

Rewiring the Brains of Stroke Patients

Neuroscientist and physical therapist Andrew Butler, associate dean for research at the Byrdine F. Lewis College of Nursing & Health Professions, discusses how he is mobilizing the healing power of brain plasticity.
Interview by Jennifer Rainey Marquez 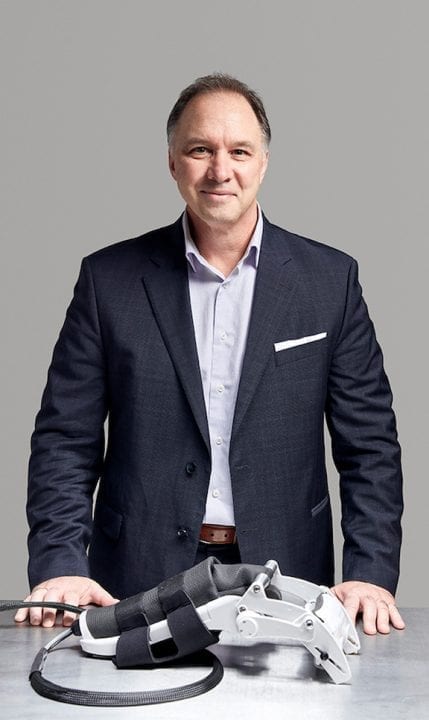 Your work is grounded in the idea of neuroplasticity. How would you explain that concept?
Before the 1980s, most people believed that once the brain is injured, those neurons are dead and gone and the brain cannot recover. But what we have since discovered is that the brain is plastic — meaning it can change and modify its connections in response to stimuli.

For example, maybe you remember someone growing up who had a lazy eye and who wore a patch to cover their strong eye. Wearing the patch makes the weak eye stronger, but it doesn’t change anything about the eye itself. Instead, it changes the brain, by forcing the visual pathways to develop further.

How does neuroplasticity work in treating people who have had a stroke?
Our approach is very similar to what I just described with the eyes. When a person has a stroke, neurons are wiped out and they often have paralysis or difficulty controlling movements on one side of the body. It gets harder to use the not-so-good arm, and so people use their good arm for everything.

In our early work, we essentially put a very fancy mitten around the good arm, and forced people to use the not-so-good arm for two weeks, one-on-one with a physical therapist. This is called “constraint-induced therapy.” After two weeks of intense therapy, for up to eight hours a day, one-on-one with a therapist, we found their weak arm was stronger.

And how does this therapy change the brain?
We used magnetic resonance imaging and transcranial magnetic stimulation to examine the area of the brain right next to the area that was affected by the stroke. Of course, we found those dead neurons wouldn’t make your hand move anymore. But the area immediately next to those neurons was totally changed. It’s as if the brain said, I’ve got a bunch of extra neurons that are just in front of that, let’s re-wire this and use those.

So, we thought, ‘What if we could take everything we know about what works — goal-directed therapy, lots of repetition, active assistance — and do it with a robot?’ We worked with a group of engineers to develop a robotic exoskeleton that would provide lots of exercise and enable the formation of those new brain pathways.

And did it produce the same results?
We compared equivalent doses of therapy in two groups of stroke patients. One group received 60 hours of one-on-one physical therapy and the other group received 30 hours of one-on-one therapy and 30 hours of robotic therapy. Our question was whether replacing 50 percent of the one-on-one therapy with robotic therapy would produce equivalent outcomes, and the answer was yes. We found the same functional improvement with half as much physical therapy if it’s paired with this robotic exoskeleton.

How does the device work as a rehabilitative tool?
The exoskeleton is connected to a computer. People put the exoskeleton on the not-so-strong arm and play video games on screen. The computer is programmed to collect data and, using machine learning, it adapts the game to fit the individual’s ability. It learns with you. The patients could complete the session all in one go, or they could break it up to fit their schedules.

But then participants said, ‘We don’t like to come into the clinic.’ So, we went back to the engineers and said, ‘Can we do this in the home?’ They said yes. We developed a robot that a person could use in their home that transmits outcome data via telemedicine. Much like your Fitbit provides data on how many steps or stairs you walk, the robot transmits how many repetitions or minutes of exercise you perform.

Butler’s robotic exoskeleton connects to a computer. People who have had a stroke can wear it and play video games to help build strength in their impaired arm.

How did the project with the Veterans Administration (VA) begin?
The VA saw that our tele-robotic approach could work with veterans. At the time, a few years ago, there was a big problem where veterans were facing huge wait times for care. So, we wrote a grant application to the VA Innovation Initiative to provide veterans with limited options access to care in their homes using telemedicine. We particularly wanted to implement the therapy in rural areas because we know veterans there have an even harder time with access.

And what was the outcome?
We found that the therapy improved outcomes in four areas. It improved clinical outcomes: the veterans could walk better, grip things better, they were stronger. It led to greater patient satisfaction. Overall, the veterans liked it.

It definitely improved access. Once veterans get discharged from the VA, especially if they live in a rural area, sometimes they aren’t getting any care. With this, they didn’t have to go anywhere. They could do it right in their homes. And it saved the money and time that veterans were spending driving into the VA clinics. The VA is still implementing the program in Georgia and around the Southeast.

So, what’s next for the research?
Now we’re working on moving the tele-robotic rehabilitation to the civilian world, which is a little more complicated. The tele- medicine program worked in the VA because if you’re a physician or therapist who is credentialed with the VA, you can treat patients across state lines. In the civilian world, if you have a license in Georgia you can’t treat patients in Alabama unless you are also licensed in Alabama.

Regardless, we are now working on a pilot implementation project with physicians and therapists with the Marcus Stroke Center at Grady Hospital. They believe in the mechanism of neuroplasticity and they believe that technology and therapy can help their patients recover from stroke.