A Simple Solution to Student Debt?

A Simple Solution to Student Debt?

Two Georgia State economists have found a small change could go a long way toward addressing the student loan crisis.
Use Scan QR Code to copy link and share it
By Jennifer Rainey Marquez 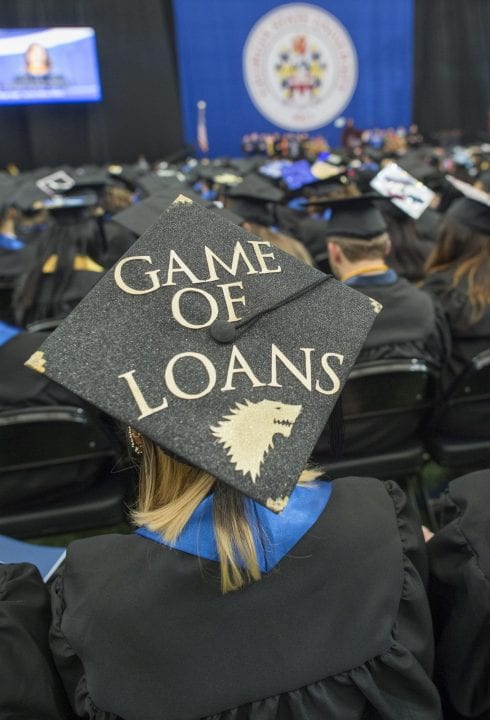 mericans collectively owe a total of $1.5 trillion in student loans, making student debt the largest category of consumer debt after mortgage debt. But this massive debt load isn’t necessarily a bad thing, according to James Cox, the Noah Langdale Jr. Chair in Economics at the Andrew Young School of Policy Studies, and Daniel Kreisman, assistant professor of economics.

“The problem isn’t that students are borrowing for college. It’s a good investment,” says Kreisman. “The problem is the way in which loans are being paid off.”

Within four years of leaving school, about a quarter of student loan borrowers are unable to keep up with their payments. A 2018 report from the Brookings Institute, a public policy nonprofit, estimated that nearly 40 percent of borrowers may default by 2023.

“These plans make it very hard to default,” says Kreisman. “If you earn nothing, your payments will be nothing.”

The U.S. Treasury Department has found that the default rate for those who choose IDR plans is less than 1 percent. So why aren’t more students choosing them? To answer that question, Cox and Kreisman tested several ways to incentivize IDR plans for borrowers, which they detailed in a recent paper.

They found the most effective mechanism was also the simplest: changing the pre-selected plan offered on StudentLoans.gov.

“Navigating the student loan process is confusing and overwhelming, and when people are overwhelmed they tend to avoid making a decision,” says Kreisman. “So, changing the default option can play a really big role in determining what plan borrowers ultimately end up in.”

The researchers tested other possible incentives, like providing more information about likely post-graduation earnings and explaining how each type of loan works in clear, easy-to-understand language. While these made a small dent in borrower behavior, none worked nearly as well as changing the pre-selected plan.

Kreisman notes that some borrowers may still decide against IDR plans: they can take longer to pay off, meaning more interest will accrue, and require annual income certification, which can be cumbersome. But he argues that for the majority of students, the benefits of safeguarding against default far outweigh the potential costs. Missing loan payments lowers your credit score, making it harder to lease an apartment, get a mortgage or even land a job.

Next, the researchers hope to partner with Georgia State to understand how the university can use this information to serve its own students.

“One idea would be to encourage our students to enroll in IDR plans right out of the gate,” says Kreisman, “or to make sure they are aware of the loan counseling that the university offers.” A first-of-its-kind program, Georgia State’s SunTrust Student Financial Management Center is helping students navigate financial issues that put them at risk of dropping out. So far the center has made a significant impact in making sure that students need not leave college because of financial issues.
Learn more here.