The university’s Neuroscience Institute celebrates a decade of discovery.
by Sonya Collins 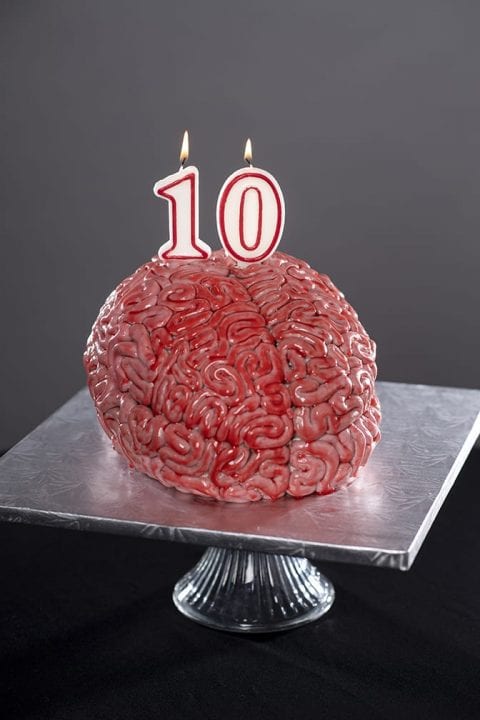 No brains were harmed in the making of this cake.

n 1998, neuroscience research in Atlanta was transformed by a jaw-dropping $37 million.

The grant was awarded by the National Science Foundation to fund the Center for Behavioral Neuroscience (CBN), established by Regents’ Professor of Neuroscience Elliot Albers and Tom Insel, then director of the Yerkes Regional Primate Research Center at Emory University. (The inter-institutional collaboration is also supported by the Georgia Institute of Technology, Morehouse School of Medicine, and Atlanta University Center’s four member schools.)

“At a time when Georgia State was not a heavyweight in research, this was the biggest single grant ever to come to us,” says Nancy Forger, professor of neuroscience.

The CBN brought in diverse faculty and fostered scientific study across disciplines. It also lay the groundwork for the university to create its own hub for neuroscience education and research. In 2008, Georgia State founded the Neuroscience Institute (NI), among the first such centers in the nation. Even today, an independent neuroscience department or institute remains a rarity at public universities.

“The Institute solidified the leading role that the university held in social neuroscience,” says Walter Wilczynski, founding director of the Institute and professor of neuroscience and psychology. “It made us a major player in that world both nationally and internationally.”

In the decade since, the NI has become one of the most interdisciplinary centers on campus.

“It was meant to be the focal point of interactions among people who did neuroscience-related work across the university, no matter their background,” says Forger, who now leads the Institute.

The faculty come from 17 departments, including “some you wouldn’t even think of, like religious studies,” says Forger. Their research — an estimated 500 publications in peer-reviewed journals — has made the Institute a leader in the fields of behavioral neuroscience, neuroinflammation and sex differences in the brain.

Among their biggest discoveries is that serotonin, long believed to decrease aggression, has the opposite effect in women. Faculty in the Institute have also revealed that women metabolize morphine differently from men and thereby require higher doses for pain relief. More recently, NI researchers found that social stress — such as discrimination — alters bacteria in the gut. Looking ahead, the faculty anticipate a new focus on translational research.

“At the Neuroscience Institute, we truly embody the idea that science and training should span departmental boundaries,” says Wilczynski. “Some of the most important work in our field comes out of collaboration.”