As the World Tweets

As the World Tweets

Denish Shah, director of the Social Media Intelligence Lab, talks about how social media insights are changing the way companies — even cities — operate.
Use Scan QR Code to copy link and share it
Interview by Jennifer Rainey Marquez 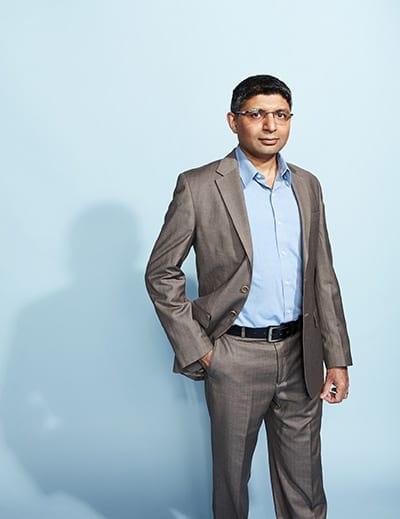 Denish Shah is also the Barbara and Elmer Sunday Associate Professor of Marketing.

You oversee the Social Media Intelligence Lab, which is part of the Institute for Insight at the Robinson College of Business. What kind of work is the lab doing?
Every day, there are millions and millions of conversations happening organically on social media platforms. There’s a popular practice called social listening, which is really just paying attention to what people are saying when they talk about your company. Our lab goes a step further by inferring trends and patterns from those conversations, and deriving meaningful insights. What are the dominant conversation topics? What are the sentiments around those topics? To what extent do these conversations impact or help predict other events?

Data on social media can be very messy. Our goal is to build smart algorithms and develop methodologies based on machine learning and other artificial intelligence techniques to extract relevant insights. These insights can inform the way brands address substantive issues — whether it’s dealing with a crisis, engaging with consumers or improving their reputation.

You’ve been working with the City of Atlanta on a reputation-building project. Can you talk about that?
City reputation is increasingly becoming a big deal. Cities compete with each other for resources, be it talent or investment from corporations — just look at how cities have been tripping over themselves to lure Amazon HQ2. The Social Media Intelligence Lab is working with the Metro Atlanta Chamber to build a real-time reputation tracker for the city.

What do you know so far about the way people view Atlanta?
There’s a huge difference between the perceptions of people who are here and those of people who live outside of Georgia and especially outside the U.S. Recognition of Atlanta is very minimal internationally. People don’t know that we are a global leader in fintech, that we are home to 15 Fortune 500 firms. The international audience to a large extent still thinks of us as “Olympics.”

You’re also looking at the role personality plays in social media engagement. Can you explain?
A lot of brands have conversations with consumers on social media platforms like Twitter or Facebook. What we want to determine is: If you customize those conversations based on the personality, rather than traditional factors such as demographics, can a brand more meaningfully engage digital media users?

How would you determine users’ personalities, though?
We’ve built an algorithm that can infer the personality traits of individuals based on how they communicate on social media: the kind of words they use, their patterns of communications. Brands could use that information to group consumers into different personality types. We’ve collected data from several top brands and found that, as of today, nobody is really varying their communications based on personality. So our next step would be to work with a brand and run field experiments to see how the practice plays out.

You’re also working with Timothy Lytton, professor in the College of Law, to evaluate how social media influence food safety practices.
What we’re really looking at is how litigation influences conversations around food safety and ultimately consumers’ risk perceptions around foodborne illnesses. Our question is, when government food safety warnings are accompanied by lawsuits against major food manufacturers or restaurant chains, do consumers tend to be more compliant?

We believe that social and news media may be playing a role, so we’ve begun analyzing data during periods of foodborne illness outbreaks. Our hypothesis is that when a litigation occurs — regardless of whether it goes through a trial — it could reinforce the perceived importance of food safety through conversations on social media, which in turn could lead to better food safety practices by consumers.

That’s interesting given that lawsuits are often seen as a negative — a drain on resources.
That’s true, but foodborne illnesses also cost a lot of money. We’re not saying you should always have litigation. But we are curious whether there is an unintended positive impact on the psyche of consumers. If we can see that it enhances the perceived importance or perceived urgency to practice food safety, then we can look at other ways to create a similar effect.

While we’re on the subject of positive impact: Traditionally, companies have focused intensely on profits. But you argue that the new focus should be customer well-being.
Customer lifetime value, or CLV, is a metric that basically looks at the total profit from the expected lifetime of a customer. Every firm works hard to maximize this metric. But we believe that maximizing CLV is not sustainable unless the firms are also improving the personal well-being of those consumers.

Why so?
Consumers are more information empowered than ever before. They don’t take what a brand is saying at face value. They do their own research and then they share that information with millions of other consumers on social media. Millennials especially are very concerned about whether the companies whose products they consume are doing more harm than good — and as a group, they represent the largest source of lifetime profits for a firm. If brands don’t wake up to this fact, in the long term it’s going to hit them pretty hard.

In fact, we are already seeing evidence of this backlash in the case of processed food. Soda consumption in the U.S. has declined in the last 12 consecutive years, and big-name brands selling processed foods continue to experience drops in sales each quarter.

Is there a standard way to measure consumers’ feelings about whether a brand makes them better off?
We’re actually working to quantify that right now. We started by asking consumers how different products and brands positively impact different dimensions of their well-being: Is it making you healthier, is it making you more productive, is it helping you save money? We have developed a new metric called CLIMB (Customer Life IMprovement from a Brand) to quantify the extent to which consumption of a brand is improving customers’ lives. The goal is to equate that score to financial performance of firms over time.