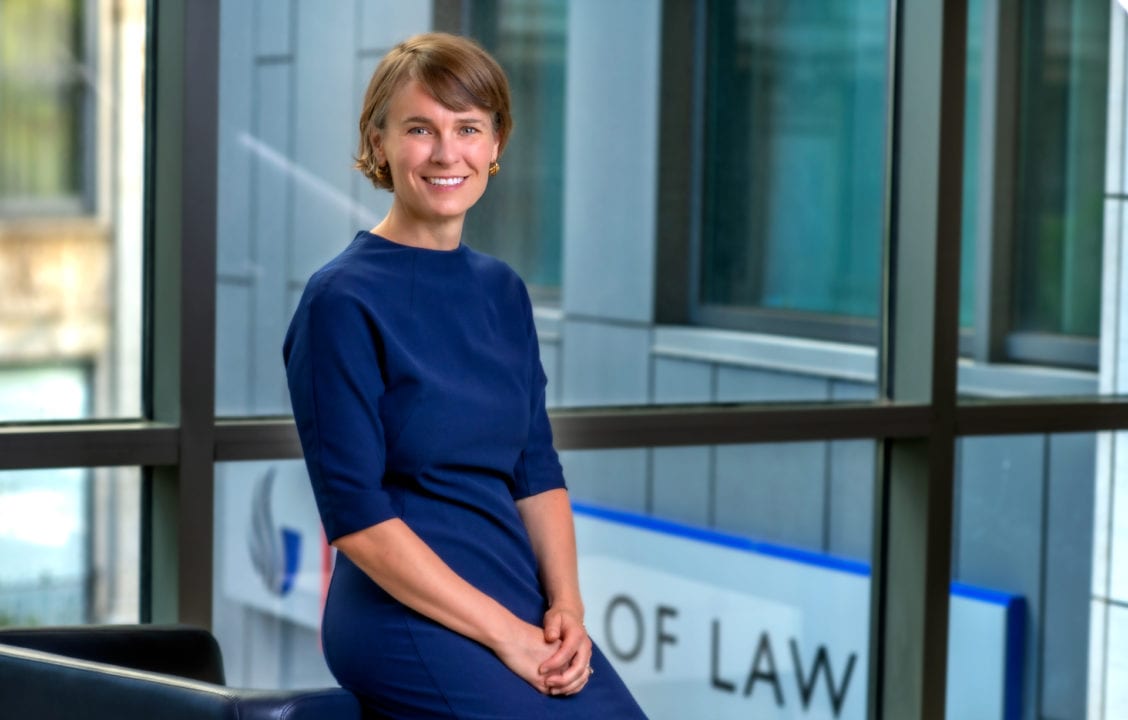 In 2017, the #MeToo movement burst into the public consciousness thanks to a viral hashtag. The same year, Charlotte Alexander, Connie D. and Ken McDaniel WomenLead Chair in the J. Mack Robinson College of Business and associate professor in the College of Law, founded the university’s Legal Analytics Lab to explore patterns in legal documents using big data analysis.

Recently, Alexander and her team assembled hundreds of statements that people — many of them powerful men — made in response to #MeToo allegations of sexual misconduct and harassment. They then applied text-mining techniques to study the language used in the statements.

“I was interested in how people defend themselves in the court of public opinion,” she says.

Here, Alexander discusses the project and how it’s connected to her larger goal of using data analysis to make the legal system more transparent for everyone.

Studying what these accused men said is related to the law, but it did not involve looking at legal documents. How did you assemble the dataset?

We started by combing publicly available lists of prominent figures who’d been the subject of #MeToo reports — the New York Times has a list, for example. Then we searched to see if they’d issued a public statement. Sometimes those statements were issued by a publicist or a lawyer. Sometimes there were press conferences. Sometimes it was just a Tweet.

Then, because I was interested in looking at these statements through an employment law lens, we isolated those that had some connection to the workplace. We eliminated reports that focused on incidents that had nothing to do with a boss/subordinate relationship.

What kinds of patterns were you looking for in these statements?

We classified the statements based on whether they contained an admission, a denial or a defense. An admission would be, “Yes I did it. Everything she says is true. I’m wrong.” These were fairly rare. Denials were essentially saying, “I never met her. This never happened.” Defenses might acknowledge that something happened, but they denied that it counted as misconduct or harassment. They contained statements like, “I was joking,” or “I grew up in a different time when the norms were different” or “I thought it was consensual.”

I was really interested in the defenses where the two sides clearly had very different views of what’s proper conduct. Here’s where our common understanding is breaking down. It raises interesting questions about whose perspective we should take into consideration. Should the intentions of the person making the statement be more important than the perspective of the subordinate?

Did you trace the story further in time to see whether lawsuits were filed?

We did not check to see whether legal charges were filed, but we did look at which statements actually raised the type of defense that could be raised in court. Something like, “I’m a good guy” wouldn’t get you out of a sexual harassment lawsuit.

Instead, the biggest chunk of defenses touched on matters of interpretation that courts also struggle with in defining what counts as sexual harassment. For example, “I didn’t intend to harass her.” That is something that’s relevant in the legal setting because courts have gone through a lot of iterations in trying to articulate whose perspective you use to judge the conduct.

The second-biggest category contained self-referential statements that I call bolstering statements. Things like, “I’ve been in this industry for 20 years and accomplished all of these things.” That isn’t relevant to whether you’ve harassed somebody, but it does telegraph power. This kind of statement almost proves the problem in and of itself, because part of what’s going on with harassment is the power differential. These people had clearly not taken the time to consider that their statements might land in a way that they didn’t intend.

What about statements that contained apologies?

We did track apologies and found an interesting pattern depending on whether cases contained legal risk or not. A case with legal risk meant that the person had a representative issuing the statement for them or there was some mention of a legal proceeding in the statement. When there was indication of active legal risk, people were much less likely to apologize and much more likely to issue strong defense statements.

That said, while media coverage often focuses on whether someone apologized, we miss what the statements reveal about power in the workplace. The focus on apology is an individual-level focus. Did this person express regret? I’m more interested in a structural-level focus.

What does a structural focus mean in terms of how the workplace and the legal system operate?

Sexual harassment law requires people to display a level of empathy. The standard is not actually consent, like we’re used to when talking about sexual assault. It’s “welcomeness.” What it asks someone in the workplace to do is assess whether what they’re doing or saying is welcome. That really does require us to put ourselves in someone else’s shoes. Yet the more powerful you are, the less likely it may be that you’re going to consider another person’s perspective.

So how do you take the power differential out of the equation? If you have corporate structures that are more horizontal and less hierarchical, if you have workplace policies and laws that generally are better at identifying and punishing bullying behavior or disincentivizing it, if you make the workplace better for workers generally, then you start to minimize the circumstances where powerful bosses can take advantage of their power. And when you have more women in top positions, then you minimize circumstances where that power gets abused in gendered ways.

Can sexual harassment training and implicit bias training play a role in reducing workplace misconduct? Or is it ineffective?

It needs to be a lot better. Research shows that people’s takeaway often is that they can avoid litigation by avoiding women or avoiding people of color. It creates the impression that people who could file a complaint are somehow dangerous, and it shuts them out of opportunities for mentorship or other informal relationships that are really beneficial. These are hard problems, and I don’t have a magic wand, but companies can do a lot better in creating policies and trainings that disincentivize harassment, discrimination and other forms of misconduct and protect people who come forward to report it.

As part of a large multi-university project, you’re also running large-scale analysis of legal texts related to settlements in court cases. Why is this important?

Again, it’s a structural problem. The courts in this country do a very bad job of tracking what they do. You can look up every Congressional debate and get all of the transcripts in bulk for free, but to do the same thing for court proceedings, you’d have to navigate a bunch of paywalls and access 94 different systems at the federal level — and hundreds of systems at the state and county levels — to get a view of what’s happening. And most of what’s there is raw text. There are very few spreadsheets that tell you, say, of all the cases filed before this judge of this case type and who won and who lost.

The project, which is called Systematic Content Analysis of Litigation Events, involves researchers across several universities in fields like law, computer science, journalism and economics. We all have an interest in making the processes and outcomes of the courts more transparent and accessible. Starting with federal court system, we’re gathering millions of pages of court records from around the country and building algorithms that can “read” the text of these documents and then produce easily understandable reporting about how judges and parties process cases, which cases go to court and the outcomes.

Eventually, we hope to create a portal online where you could ask a question. For example, “How many employment discrimination cases have there been in the Northern District of Georgia in the past year, and how often did the plaintiff win?”