As the Houston Astros’ Alex Bregman steps up to the plate in Game 3 of the World Series tonight, he might be hearing “I Am the Walrus” over the loudspeakers at Truist Park.

Likewise, Jose Altuve might catch a few bars of “Do You Know the Way to San Jose?”

The musical easter eggs — get it? “I am the eggman?” — are courtesy of longtime Braves organist and Georgia State grad Matthew Kaminski (B.Mu. ’00, M.Mu. ’12), who has been entertaining Atlanta fans for 13 seasons at both Turner Field and Truist Park.

An accomplished player and teacher of organ, piano and accordion, Kaminski leans on his deep roots in jazz improvisation and the ear training he received as a Georgia State student to react to in-game situations with the perfect piece of music.

He may play a few bars of The Beatles’ “Help” when there’s a gathering on the mound around a struggling pitcher. If a batter loses his grip on the lumber, the crowd might hear Paul Simon’s “Slip Slidin’ Away.”

“There are certain situations I have to react to on a moment’s notice,” he said. “Being a jazz musician is good from the perspective that I can do things on the fly. That’s the advantage of having someone playing a live organ. I have the ability to play things spontaneously whereas a DJ would have to search for a certain song that would work for the moment.”

Kaminski is well known for the walkup music he plays when opposing batters make their way to the plate during Braves home games.

As he prepped this week for his first World Series behind the Hammond organ, Kaminski said he wasn’t sure the Braves would have him play walkup tunes for Astros batters (sometimes teams opt out in high-stakes contests like playoffs, he said), but he’ll be ready with a few choice pieces nonetheless.

Like the “I am the eggman” chorus for Bregman, the Astros third baseman, and a Chick Corea tune for shortstop Carlos Correa. 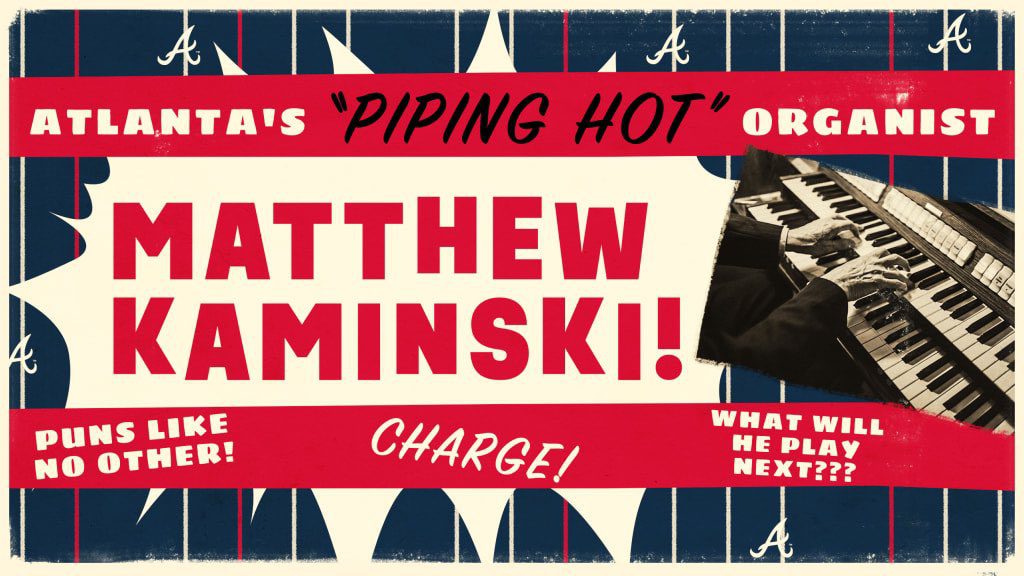 While he comes up with ideas for many of the walkup pieces himself, with input from his wife, Kaminski also sometimes crowdsources ideas from fans using his @bravesorganist Twitter handle. Making the tune recognizable for the fans and drawing a connection between the song and the player is all part of the fun, Kaminski said.

“I want the fans to have that game within the game,” he said. “I consider that part of my job.”

When he’s not playing for tens of thousands of baseball fans, Kaminski stays busy teaching and performing as a member of bands in genres from Latin salsa to swing to polka. Earlier this month, he released a new studio album, “L.A. Connections,” recorded as part of a jazz trio featuring guitarist Bruce Forman and drummer Jeff Hamilton.

He’s also performed during Georgia State Panthers football games, Gwinnett Gladiators hockey games and University of Georgia baseball games. When he’s not behind the keyboard, he stays busy taking his daughters Allison, 11, and Sarah, 8, back and forth to softball games.

“Sometimes I get more nervous watching them play than I do when I’m playing for 40,000 people,” he said.

After starting his career at IBM and finding his footing as an entrepreneur, Mohammed Hasan Tarek (B.B.A. ’99) is focusing on his passion for cricket as the owner of one of the sport’s newest professional teams, the Atlanta Fire.
By Michael Davis (B.A. ’03)
The Alumni Association 40 Under 40 honoree and leading lady in the new Disney+ series "Turner and Hooch" is a star of stage, television and film
By William Inman (M.H.P. ’16)