The Alumni Association 40 Under 40 honoree and leading lady in the new Disney+ series “Turner and Hooch” is a star of stage, television and film.

In an opening scene in the first episode of the new Disney+ series “Turner and Hooch,” Carra Patterson (B.A. ‘06) — starring as Jessica Baxter, a street-smart U.S. Marshal — and her screen partner Josh Peck (as Scott Turner) set out to nab a cybercriminal on the lam.

After a wild chase scene, the duo captures the fugitive. The camera pans up from the point of view of the crook, who’s on his back, to Patterson with her gun drawn. Revealed then, from under her bulletproof vest, is Patterson’s baby bump.

“I was very pregnant during filming,” she said. “In a lot of shows, they try to hide it, but they wrote it into this one really well.”

Patterson is a bona fide actor on the stage and screen. She can do drama: She portrayed Eazy-E’s wife in “Straight Outta Compton,” the hit biopic about the influential rap group N.W.A. She’s on Broadway: She originated the character Rena in the premiere of the 2017 Tony Award-winning production of the August Wilson play “Jitney.” And she’s funny: In “Turner and Hooch” she plays the wise-cracking buddy cop to Peck, and his big, slobbering dog, in the remake of the 1989 Tom Hanks comedy. Oh, and remember she played that role while pregnant and in the middle of the pandemic. (Her daughter, Cressida, was born on Christmas Day in Vancouver, Canada, where the show was filmed.)

Back when she was an undergrad at Georgia State, Patterson says she probably daydreamed about becoming a movie star more than she’d like to admit.

“I thought, ‘I just need to get to New York or L.A.’ I didn’t think I needed a degree to be an actor,” she said. “But, looking back, I wouldn’t be where I am today had I not pursued my degree.”

While at Georgia State, back before Atlanta was the Hollywood of the South, Patterson — who was Miss Georgia State in 2005 — says she went to every audition she could find.

“Then all of a sudden I found myself in my senior year, thinking, ‘Well, I haven’t been discovered yet,’” she said.

So, to grab the attention of casting directors, agents and managers around town, Patterson teamed up with a handful of fellow actors and Georgia State students to put together a showcase of their performances. In it, she acted and directed in the short play “Goodnight,” written by Dr. Shirlene Holmes, associate professor emeritus in the College of the Arts, and one of her mentors.

The Alliance Theatre called, and Patterson was cast for the premiere of Tarell McCraney’s “In the Red and Brown Water.”

From there, she auditioned for and was accepted into the Master of Fine Arts (M.F.A.) program at New York University’s Tisch School of the Arts. 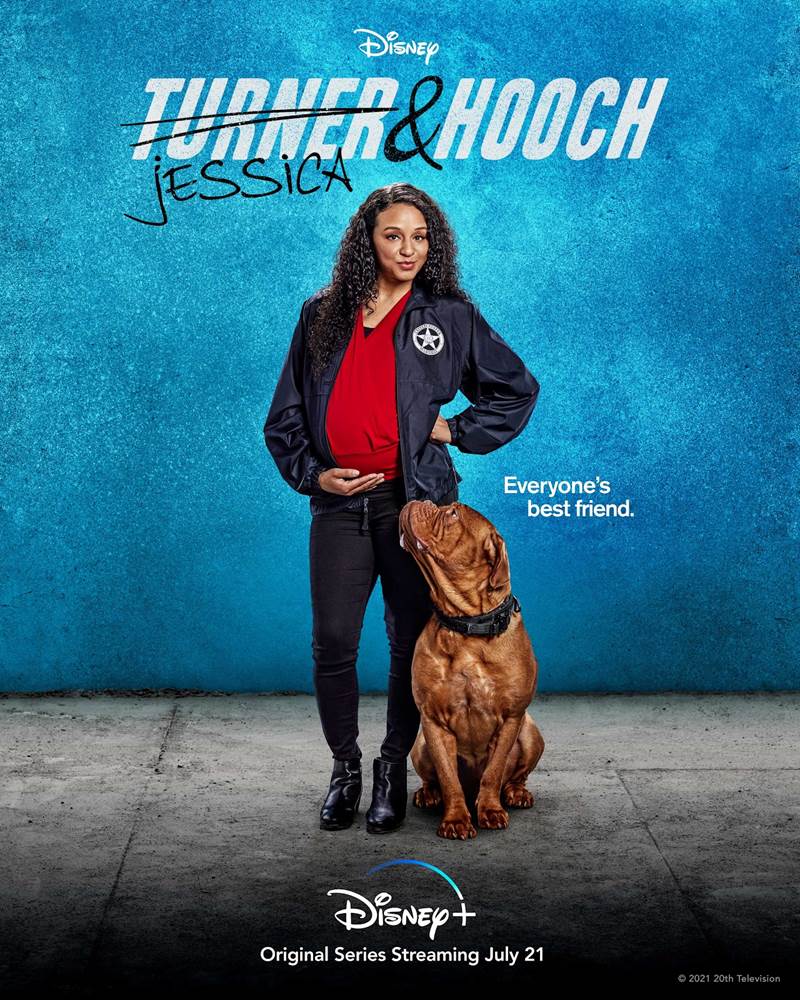 A promotional poster for the Disney+ series “Turner and Hooch” features a pregnant Carra Patterson as Jessica Baxter with Hooch, a Dogues de Bordeaux and Patterson’s canine costar.

While studying for her M.F.A., Patterson made her Broadway debut alongside Cynthia Nixon, who starred in the HBO series “Sex and the City,” in the 2012 production of “Wit.” And while that proved to be her entrée to showbiz, she hesitates to call it her “big break.”

“I still had four side jobs and two roommates,” she said. “The expectation of being an overnight success is an illusion that celebrity culture often perpetuates. I had to redefine what success meant to me, commit to the artistic journey and release any unrealistic expectations.”

“She was putting in the work,” said Holmes, her mentor. “And she did it. She went from Georgia State to Broadway.”

The theatre remains Patterson’s first love, and she works with a couple of nonprofit groups in New York — her home base — that introduce young people to acting, writing and directing for the stage. She’s also made a few trips back to campus to speak with Georgia State theatre students.

“The arts are a great way to help transform the lives of young people by giving them the space to find their voice, build confidence and embrace their unique creativity,” Patterson said.

Her work in the community is one reason why the Georgia State Alumni Association honored her as one of the most influential graduates under the age of 40.

Now that “Turner and Hooch” has wrapped, she’s considering her next move.

“I’m grateful to be at a place in my career where I can be intentional about the stories I want to tell,” she said. “It’s a great time — there is so much content now with streaming platforms, on Broadway and in film. The world is craving our stories and finally giving Black creators the space to shine.”

But, she says, the next gig she takes will be an understudy to her biggest role so far.

“I’m staying pretty busy as a real-life mom,” she said.

Patterson has been cast to portray Coretta Scott King in the Netflix film “Rustin.” Produced by Higher Ground Productions, founded by former President Barack Obama and his wife Michelle, “Rustin” tells the story of Bayard Rustin, the late civil rights activist who helped organize the 1963 March on Washington where Martin Luther King Jr. made his famous “I Have a Dream” speech.

After starting his career at IBM and finding his footing as an entrepreneur, Mohammed Hasan Tarek (B.B.A. ’99) is focusing on his passion for cricket as the owner of one of the sport’s newest professional teams, the Atlanta Fire.
By Michael Davis (B.A. ’03)
Andrew Gumbel’s prize-winning book “Won’t Lose This Dream: How an Upstart Urban University Rewrote the Rules of a Broken System” recounts Georgia State’s highly successful efforts to level the playing field for students from all backgrounds.
Interview by William Inman (M.H.P. ’16)