Mogul In The Making

Mogul In The Making

Kash Molwani (B.B.A. ’17) taught himself English by reading the dictionary. Now, the Schwarzman Scholar has his sights set on owning a media company.
Use Scan QR Code to copy link and share it
By Kathleen Joyner

In July, Kash Molwani will embark on the second-biggest journey of his life: a 6,800-mile trip from New York to Beijing, where he’ll join a handful of other international fellows in an intensive global affairs master’s degree program. 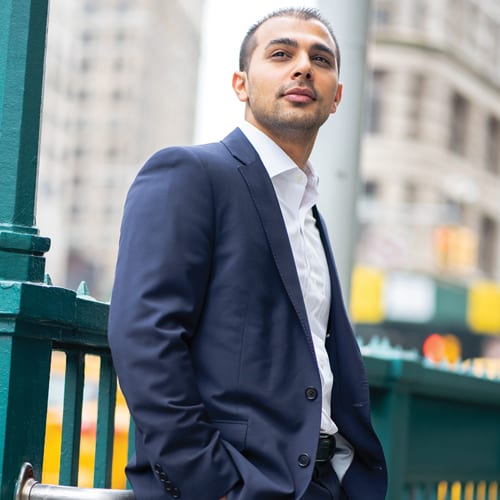 The Honors College grad is Georgia State’s first Schwarzman Scholar. Molwani beat out more than 2,800 applicants to participate in the international fellowship program in which students study business, public policy and global affairs in China, analyzing how those topics shape the country’s links to the rest of the world.

Fortunately, he’s had plenty of success learning to navigate and thrive in new surroundings. When he was 8 years old, Molwani’s family moved from Karachi, Pakistan — where they had relocated from the village of Talhar — to Augusta, Ga.

His earliest memories are of his grandfather’s sugar cane and potato farm, the village’s one-room schoolhouse and the cab his father drove for 20-hour shifts around Karachi, Pakistan’s bustling business capital.

In Georgia, everything was different and new. The transition was difficult, Molwani said, especially amid the anti-Muslim sentiments that lingered after 9/11.

“I was bullied, and I wanted to fit in,” he said. “The best way I thought I could do that was to adapt the way I looked, what I wore and how I spoke, which required a little monetary investment.”

There wasn’t extra money in the family budget, so he and his brother offered to wash neighbors’ cars and clean their toilets. That’s when Molwani’s entrepreneurial spirit surfaced.

His determination and resourcefulness helped him learn English quickly, too. After just four months, Molwani had so impressively mastered English that his school moved him out of English as a Second Language classes. He even won the school’s spelling bee during his first year in Augusta.

“I had an English dictionary at home, and I read it every day,” he said. “We couldn’t afford cable or video games, and I didn’t have the patience to keep moving those little antennas to watch public channels.”

“I learned early on how important managing finances was for a household, but I had no idea I could have a career in finance until I got to college,” Molwani said.

Before being named a Schwarzman Scholar, Molwani worked as an investment banking analyst for Credit Suisse in New York.

Now, he’s looking forward to expanding his knowledge of emerging markets and private equity, all to help make his dream of owning his own media company a reality.

“I want to run the kind of company that helps people get to know other communities and other cultures in a positive way,” he said.

On top of working to become the president of his own media company, Molwani has dedicated himself to another feat: Saving a million dollars by the time his dad turns 65.

“My parents worked their whole lives and sacrificed so their kids could have a better education and a better life,” he said. “I want them to be able to enjoy retirement together.”

He’s got less than seven years to make it happen, but Molwani loves a challenge.

Georgia State’s new head men’s basketball coach brings a wealth of experience and lessons learned after working with some of college hoops’ top minds.
Interview by William Inman (M.H.P. ’16)
Going into his fourth decade as the play-by-play man for the Panthers, Dave Cohen (B.A. ’94) recalls some of Georgia State’s biggest sports moments and talks about his status as a superfan of the rock band Kiss.
By William Inman (M.H.P. '16)
A regional director for Pandora Radio, Shalya Forte (B.A. ’04) has made a career out of anticipating the next note.
By Matt Nixon
Brooke Weiner (B.B.A. ’19), Georgia State’s winningest beach volleyball player, has been playing in the sand all her life.
By Austin Birchell (B.A. '20)