A regional director for Pandora Radio, Shalya Forte (B.A. ’04) has made a career out of anticipating the next note.
By Matt Nixon

The music changes every day for Shalya Forte and her team. Up in their sunny Midtown office, they look out over the Atlanta skyline from the 15th floor as they work — and part of that work is playing and discovering new artists daily. Today’s streaming music station is Tears for Fears. Using the company’s trademark technology — where an algorithm organizes 40 million-plus songs in the company’s music catalog according to more than 450 attributes — Pandora will play different tunes all day that sound similar to the British pop band. 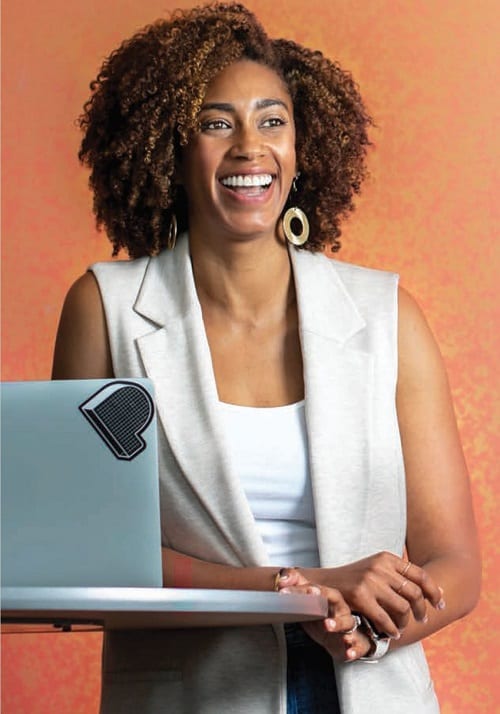 As director of the Southeast U.S. for Pandora Radio, Forte has built the streaming music service’s footprint and revenue in the region during a period of dizzying change for the industry and the technologies that make it possible.

Forte’s professional relationship with Pandora began in 2009 as an independent consultant. At the time, she was working with a number of Internet startups, helping them establish a presence in the Southeast. When the opportunity to consult with Pandora arose, Forte saw its career-defining potential.

“How many times do you get the chance to work on something that could redefine how we live?” asked Forte. “As a passionate music fan, I knew Pandora wasn’t just another short-lived startup. My gut was telling me that mobile devices like the iPhone had the potential to be the greatest industry disrupter since television and that Pandora would be there redefining audio consumption.”

At the start of her time with the company, streaming entertainment was emerging as little more than an incremental improvement to downloading memory-consuming files or watching choppy QuickTime clips. Over the course of the decade, it’s become the dominant force in all forms of entertainment, a threat to cable companies and movie studios, and the banisher of media like the CD and DVD to niche markets alongside tapes and vinyl records.

Pandora’s growth in the Southeast is one way to illustrate Forte’s role in helping the company thrive during this industry sea change. She was hired in 2011 as the company’s first employee based in the region. Pandora now has more than 200 employees in the Southeast, and moved its second headquarters to Atlanta in 2019.

Fittingly, the traits and instincts that have brought Forte professional success are the same ones that drove her cross-country move from her hometown in Lompoc, Calif., in Santa Barbara County, to Georgia State in Atlanta.

“When I visited the campus in high school, I liked that Georgia State was downtown and had really good connections with a number of big businesses,” Forte said. “I felt that going to college in close proximity to so many large companies would give me a leg up on those who went to schools in college towns.”

Recently recognized by the Alumni Association as part of its 2019 class of 40 Under 40, which honors the university’s most influential and innovative alumni under the age of 40, Forte has made a career of looking to the future and identifying what’s next.

Maybe that’s partly why she decided to come to Georgia State back in 2000.

“Georgia State is thriving as never before,” she said. “Where else you can find such a diverse campus that offers rich education standards, a commitment to investing in its students and a track record of being a great conduit to businesses in so many different industries? I love telling everyone I’m a Panther.”

Georgia State’s new head men’s basketball coach brings a wealth of experience and lessons learned after working with some of college hoops’ top minds.
Interview by William Inman (M.H.P. ’16)
Going into his fourth decade as the play-by-play man for the Panthers, Dave Cohen (B.A. ’94) recalls some of Georgia State’s biggest sports moments and talks about his status as a superfan of the rock band Kiss.
By William Inman (M.H.P. '16)
Kash Molwani (B.B.A. ’17) taught himself English by reading the dictionary. Now, the Schwarzman Scholar has his sights set on owning a media company.
By Kathleen Joyner
Georgia State joins the CDC’s Prevention Research Center network with a new Clarkston-based office focused on migrant health.
By Jennifer Rainey Marquez