Best Of The Beach

Best Of The Beach

Brooke Weiner (B.B.A. ’19), Georgia State’s winningest beach volleyball player, has been playing in the sand all her life.
Use Scan QR Code to copy link and share it
By Austin Birchell (B.A. '20)

California native Brooke Weiner spent her childhood within earshot of the Pacific Ocean. Growing up in Ventura, Calif., where her father built surfboards for a living, she passed the time on the beach playing volleyball. 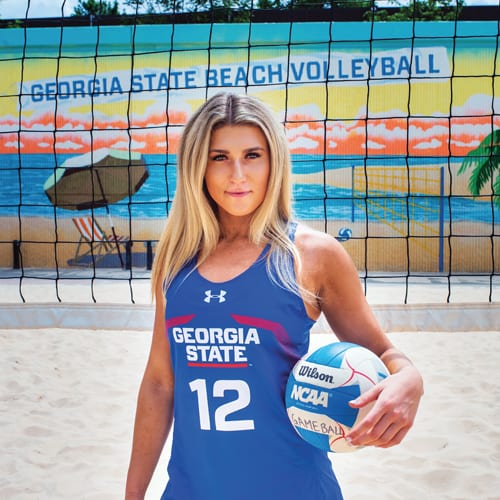 After a successful beach volleyball career in high school, she set her sights on the East Coast, hoping to expand her horizons.

“I immediately fell in love with Georgia State and the city of Atlanta,” Weiner said.

When moving across the country, Weiner’s biggest worry was not knowing anyone, but to her surprise, she instantly felt welcomed.

“Coach Beth (Van Fleet) has such a warm heart,” Weiner said. “She always has us over for dinner and became a second mom to me. Everyone from the team has been amazing, too. We all come from different places, but we come together to make a family.”

“To me, Brooke embodies joy and grit. She loves competing and thrives under pressure,” said Van Fleet (B.B.A. ’99). “She developed a strong voice and presence over her four years here while putting the good of the team above her own needs.”

Weiner’s parents remained by her side from across the country as some of her biggest fans. She’s a first-generation student, so her parents made sure to encourage her studies just as much as her athletics.

They have also consistently found ways to see her games. During her freshman year, Weiner had told her mom she didn’t have to come to her preseason tournament. When she noticed other moms were coming, she changed her mind.

“I mentioned that I wanted her there, and she booked a flight within the hour,” Weiner said.

She broke the university’s all-time volleyball record for most career wins with 92 and received the American Volleyball Coaches Association Top Flight Award in 2018 and 2019.

“I definitely feel blessed to have played in such a phenomenal program and attended such a great university,” Weiner said.

Weiner’s next step is moving back to California where she hopes to put her marketing degree to work in real estate.

Kash Molwani (B.B.A. ’17) taught himself English by reading the dictionary. Now, the Schwarzman Scholar has his sights set on owning a media company.
By Kathleen Joyner
Georgia State’s new head men’s basketball coach brings a wealth of experience and lessons learned after working with some of college hoops’ top minds.
Interview by William Inman (M.H.P. ’16)
For Joyce Lowenstein (B.A. ’19), a framed bachelor’s degree is the realization of a dream seven decades in the making.
By Torie Robinette
Going into his fourth decade as the play-by-play man for the Panthers, Dave Cohen (B.A. ’94) recalls some of Georgia State’s biggest sports moments and talks about his status as a superfan of the rock band Kiss.
By William Inman (M.H.P. '16)