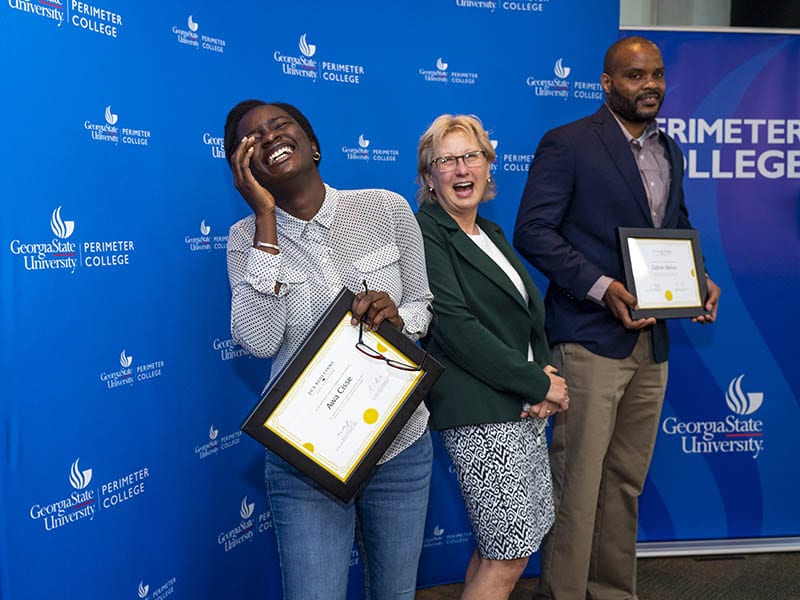 Awa Cisse and Gideon Melvin have been awarded the Jack Kent Cooke Foundation’s Undergraduate Transfer Scholarship to attend the four-year college or university of their choice.

The scholarship, designed to help the nation’s top two-year college students seeking to complete their bachelor’s degrees at four-year institutions, provides each recipient up to $40,000 per year for up to three years.

This year, eight Perimeter students were named semifinalists for the Jack Kent Cooke scholarship. The Jack Kent Cooke Foundation evaluated applicants on their academic ability and achievement, financial need, persistence, leadership and service to others.

The JKC Foundation selected 72 recipients nationwide to receive the scholarship this year. Cisse and Melvin were chosen from more than 1,300 applicants attending 398 community colleges.

Cisse and Melvin learned about their award from Perimeter College Dean Nancy Kropf during a surprise announcement on the Clarkston Campus.

“It’s life-changing in all aspects,” Cisse said of winning the scholarship. “I still can’t process it.”

Melvin reacted similarly and said the award will relieve the financial burden of paying for his next few years of college.

Cisse, a biology student who wants to pursue a degree in medicine, is considering attending Yale University, Vanderbilt University and several Georgia universities, including Georgia State. 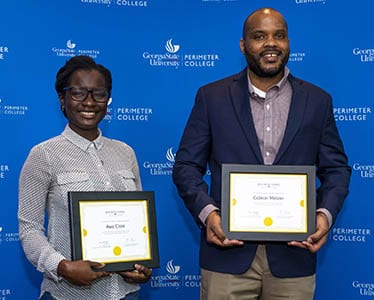 Melvin, an Honors College student studying political science who plans to pursue a law degree after completing his bachelor’s degree, has applied to Yale and Georgia State.

In recent years, the Honors College at Perimeter has provided technical assistance to students wanting to apply for the JKC scholarship by helping them with the application process.

“The Honors College is so happy to be a part of this process for Perimeter students,” said Dr. Lauri Goodling, associate dean of the Honors College at Perimeter. “We love seeing them succeed and watching the doors open!”

In addition to financial support, Cisse and Melvin will receive comprehensive educational advising to guide them through the process of transitioning to a four-year college and preparing for their careers. Scholars will receive opportunities for internships, study abroad and graduate school funding and be connected to a network of Cooke Scholars and alumni.

Since 2002, the Jack Kent Cooke Foundation has award 23 Perimeter students the undergraduate transfer scholarship. The students have gone on to achieve success in bachelor’s degree programs and beyond at institutes such as the Massachusetts Institute of Technology, Georgia Tech, Emory University, Howard University, The University of Southern California, Stanford University and Agnes Scott College. The 2020 JKC scholarship recipients, Diana Ha and Matthew Wessler, chose to continue their undergraduate education at Georgia State.

“That’s a tremendous, tremendous designation for our college,” she said.