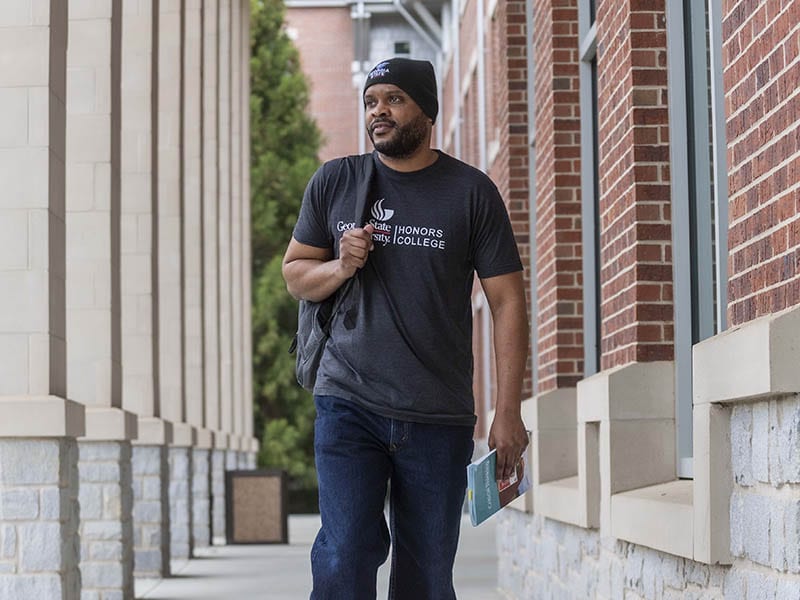 The Georgia State University Perimeter College Honors student interned for U.S. Congressman Hank Johnson and is a recipient of a Congressional Black Caucus scholarship. He is a former Student Government Association leader and one of just two student members of Georgia State’s Committee for the Advancement of Diversity, Equity, and Inclusion.

Melvin also was recognized at his job with Georgia State’s Campus Recreational Services, where he won a recreational services award for service excellence.

Now he can add another achievement to his list.

Melvin is a semifinalist for the prestigious Jack Kent Cooke Undergraduate Transfer Scholarship. Winners of the competitive award, expected to be announced in late April, are judged on factors such as leadership, service to others and academic ability. It is the largest private scholarship for two-year and community college transfer students in the country.

“All of this was because Perimeter College gave me a chance to be competitive,” he said.

Melvin, who grew up in Wilmington, N.C., enrolled at Perimeter at age 42 after more than 20 years out of school.

“Perimeter College has given me the opportunity to go back to school to finish what I started a long time ago,” he said.

Melvin made an impression almost immediately on his professors, including Dr. Lauri Goodling, associate dean of the Honors College at Perimeter.

“Gideon is committed to a variety of initiatives, including serving as a student member of the Committee for the Advancement of Diversity, Equity and Inclusion, where he engages in thoughtful conversations about diversity, equity and inclusion efforts in the Honors College. He is an excellent voice to have at the table.”

Melvin credits Dr. Salli Vargis, his history professor on the Newton Campus, for encouraging him to enroll in Honors courses, get involved in student government and apply for the Jack Kent Cooke scholarship.

“Dr. Vargis encouraged me to keep my grade point average up and keep my eyes on the idea that I should apply for a Jack Kent Cooke scholarship one day. And here I am — I’m a semifinalist,” said Melvin.

Melvin will graduate from Perimeter in May. He has been accepted to transition to Georgia State’s Atlanta Campus, where he plans to continue his studies in political science. He also received news this spring that he is a candidate for Yale University’s Eli Whitney Scholarship Program.

After completing his bachelor’s degree, Melvin hopes to pursue law school to become a civil rights attorney. He volunteers as a legal observer for the American Civil Liberties Union.

Each recipient chosen for the Jack Kent Cooke scholarship will receive up to $40,000 per year for up to three years to complete their bachelor’s degree.

Since 2002, the JKC Foundation has awarded  21 Perimeter students  the scholarship.

Melvin hopes his desire to get a degree in his 40s inspires other older students.

“If you are not satisfied where you are today,” he said, “I would encourage older adults who may have deferred their dream of going to college to go for it.”