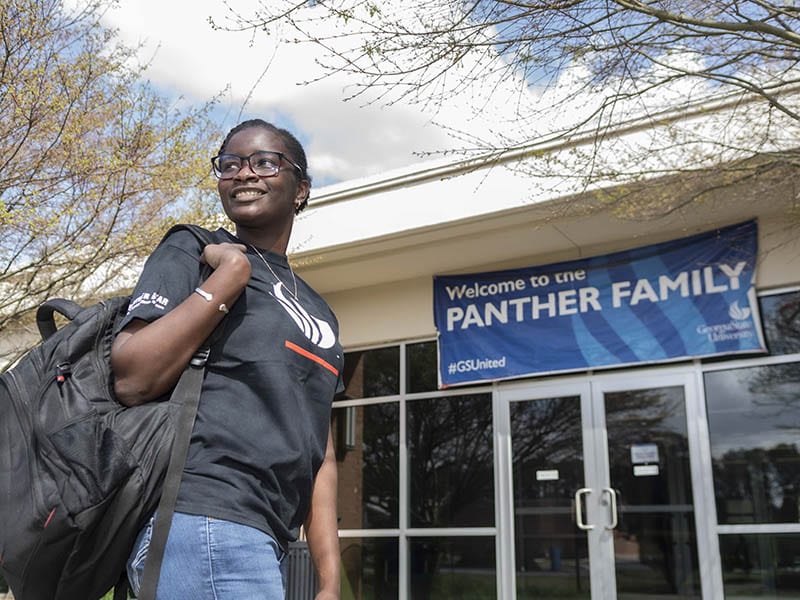 Eight students at Georgia State University’s Perimeter College recently were named as semifinalists for the 2021 Jack Kent Cooke Undergraduate Transfer Scholarship. Finalists will be announced later this spring. Perimeter students represent all but one of the semifinalists from Georgia for the national scholarship. We are featuring each of Perimeter’s semifinalists in articles on our News Hub. Below, we introduce you to one of them.
By Kysa Anderson Daniels

Awa Cisse has a habit of turning obstacles into opportunities.

When she spent much of her youth in hospitals to deal with anemia and abdominal cysts, she decided to become a doctor.

When cultural norms in her country steered girls away from science, she moved to a country that provided more freedom.

When her younger sisters needed care, she committed to becoming their role model.

Cisse, who now studies biology at Georgia State University’s Perimeter College, has been named a semifinalist for the Jack Kent Cooke (JKC) Undergraduate Transfer Scholarship, one of the United States’ most competitive awards for two-year college students.

The scholarship gives each winner up to $40,000 per year for up to three years to complete their bachelor’s degree. It is the largest private scholarship in the country for two-year and community college transfer students, with winners selected based on factors such as leadership, service to others and academic ability.

Cisse hopes her parents, who always encouraged her curiosity and academic pursuits, would be proud.

“I was a sickly child, and I would spend weeks at the hospital, and I always wanted to know what was happening with me,” she recalled of growing up in Senegal’s capital, Dakar.

But in Senegal, girls were not channeled into the study of science.

She fondly recalls her mother’s reassurance after teachers placed her in non-science classes in high school.

“She told me not to cry,” Cisse remembers. “She said, ‘You have to believe in yourself. If you put your mind into it, you can do whatever.’”

Cisse clings to these words, especially since her mom died unexpectedly in 2012, a year after Cisse graduated from high school.

Cisse had decided to move to the United States, where she would have the freedom to pursue her dream of becoming a physician. But the move did not come quickly or smoothly.

Because of her mother’s death, Cisse postponed her plans to come to the United States, opting instead to stay in Senegal to work and care for two younger sisters until they graduated from high school.

Around the time Cisse’s mom died, her dad moved to Atlanta to get medical treatment for diabetes complications that required a bilateral leg amputation. In 2018, once she got her siblings settled, Cisse headed to Atlanta to enroll in college and be by her father’s side.

“It was challenging,” Cisse said of helping to care for her dad and attend college simultaneously.  “But I was honored to be there for him so we could all navigate it together.”

Her father died in February due to his illness. Cisse learned she’d been named a JKC semifinalist only days after her family buried him in Senegal.

Biology professor Dr. Kimmy Kellett is impressed by Cisse’s resiliency. She has known her for a couple of years, mostly because of Cisse’s participation as a student leader in the Louis Stokes Alliance for Minority Participation (LSAMP) program, an initiative aimed at increasing the number of minority students graduating with degrees in science, technology, engineering and mathematics. Kellett is LSAMP’s program adviser.

“As a student, Awa is resilient, endlessly curious and devoted to self-improvement,” Kellett said. “As a student leader, she is patient, supportive and inspirational. Rather than focusing on limitations, she figures out how to achieve goals using the resources available. I know that Awa will (and already has) made the world a better place, and I predict that this is the first of many articles written about her.”

Cisse’s college involvement also includes her roles as president of the Feminati Club, a student leader for LSAMP, a member of Phi Theta Kappa, a volunteer chemistry tutor and part of the Dunwoody Outdoor Club. In Senegal, Cisse volunteers with Tanel Health, an organization that helps provides health care for individuals in rural areas.

“Everything that’s happening, I do to be a role model for my sisters,” she said.

Winning the Jack Kent Cooke award would enable her to focus less on finances and more on her health and studies.

Emory, Yale, Vanderbilt and several Georgia universities, including Georgia State, are among the schools to which Cisse is applying to continue her education in biology, biochemistry and women’s studies. Becoming an emergency room doctor is among Cisse’s considerations.

The announcement of this year’s Jack Kent Cooke scholarship winners is expected in April. Since 2002, the foundation has awarded 21 Perimeter students the scholarship.