Use Scan QR Code to copy link and share it
Riuki Gakio (B.A. ’21) combined his creative talent with the resources of Georgia State to produce the award-winning film “Our Plastic World.”
By Michael Davis (B.A. '03)

He put his notes away and didn’t give them another thought as his family gathered to watch the show.

When his film, “Our Plastic World,” was named the winner of a Southeast Emmy Award in a livestreamed event in September, he was in shock.

“My grandmother had to remind me I needed to give my acceptance speech,” said Gakio, who was 23 years old at the time. 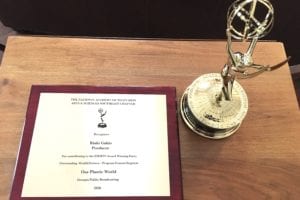 The Emmy Award and plaque Riuki Gakio received for his film “Our Plastic World.”

Graduating this spring with a degree in film and media, Gakio now has an Emmy — received by mail in early March — to place next to the five Telly Awards his film had already won.

“Our Plastic World” was begun as a project for Gakio’s TV Practicum course, and was produced in collaboration with GSUTV and Georgia Public Broadcasting.

The son of Kenyan and American parents, Gakio grew up for a time in Botswana and attended high school in Kenya before returning to the U.S. for college. With a goal of working in film and television, he chose to study at Georgia State because of its location in the media hub of Atlanta and its partnerships across the industry.

As a member of the Bahá’í faith, Gakio said he feels a strong sense of responsibility to care for the environment. When he entered the TV Practicum course and discovered existing footage of the environmental catastrophe wrought by plastic waste around the world, he was inspired to work with his co-producers to capture additional footage and conduct interviews with experts and activists. The 36-minute documentary’s 2020 Emmy Award came in the category of Health and Science – Program Feature/Segment.

Gakio said he wanted “Our Plastic World” to inspire solutions and promote collaboration.

“A lot of films just show the problem, but to me that doesn’t tell the whole picture,” he said. “It was important to me to showcase how people around the world are coming together to solve these problems.”

From banning the use of plastic bags in some parts of Africa, to recycling plastic waste to use in boat building, to scientists in the Antarctic going to great lengths to leave the continent in its pristine natural condition, the film shows people around the world tackling the problem in unique ways.

“Our Plastic World” was aired across the state on Georgia Public Broadcasting Dec. 29, 2019, and continues to air periodically on GPB Knowledge. The premiere date was chosen by Gakio to honor co-producer Christopher Kurian, who died the previous August before the film was completed.

“It was really special to have the premiere on his birthday, and his family was very grateful,” Gakio said.