A professional singer who got his start in opera at Georgia State is featured in a new documentary film capturing the lives of performers with no place to perform.

When COVID-19 forced the closure of theaters and concert halls, Victor Ryan Robertson watched as job after job was yanked out from under him. A member of the Victory Hall Opera in Charlottesville, Va., he’d been preparing, prior to the start of the pandemic, for the opera’s first production of 2020, “La Traviata.”

But it didn’t happen.

With a cast of singers ready to perform but no one to sing to, opera director Miriam Gordon-Stewart gathered the troupe on a Zoom call to propose they document their daily lives on their iPhones.

“We decided to create something we knew we could create and that we weren’t going to have to cancel,” Gordon-Stewart said. “I think what makes the film special is seeing the struggles. Everyone was so honest and vulnerable in filming themselves. They are all experiencing different things for different reasons, but they all just sense the importance of documenting it.”

Robertson is one of five singers in the film who share their experience of the pandemic onscreen before gathering in a rural barn to rehearse for a recording of “La Traviata” that became the soundtrack of the documentary.

“Seeing them come and be in their element and be singers again is a really emotional moment in the film,” Gordon-Stewart said. “You realize what these people were put on Earth to do, and it’s certainly not sitting around at home. It’s singing.”

Robertson joined Victory Hall in 2019. From 1999 to 2001, he’d been a student of music professor Mary Ann Hill in Georgia State’s Neighborhood Music School before joining the artist training program of Tri Cities Opera in Binghamton, N.Y.

Robertson said Hill heard him perform with a rock group at an Atlanta coffee shop and suggested he train with her at Georgia State.

“Then she immediately tricked me into singing opera,” he said. “I was starting to perform with really great musicians, and I felt like I had to catch up with those guys, so it was perfect timing for her to come along.”

After the rock group disbanded, Robertson said he started to pursue opera wholeheartedly.

After two years at Tri Cities, Robertson landed his first big role: Baz Luhrmann’s adaptation of “La Bohème” at the Ahmanson Theatre in Los Angeles. He’s gone on to perform around the world as part of the Three Mo’ Tenors, and he’s sung in operas on and off Broadway, and throughout the United States, Australia, Europe and the United Kingdom.

Along with the documentary, which is available on Victory Hall Opera’s website through March 27, the opera is releasing the soundtrack of the performance, which was produced by 10-time Grammy Award winner Blanton Alspaugh. 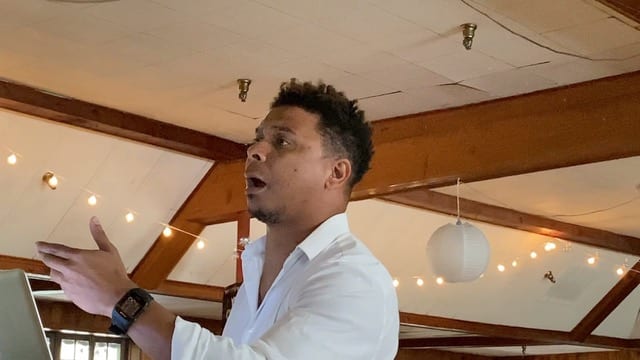