A Christmas Classic Carries On

A Christmas Classic Carries On

From the inside of a shipping container, Professor Stuart Gerber provides the sound effects and music for the Alliance Theatre’s socially distant, drive-in production of "A Christmas Carol: The Live Radio Play."
Use Scan QR Code to copy link and share it
Interview by Tony Mangle 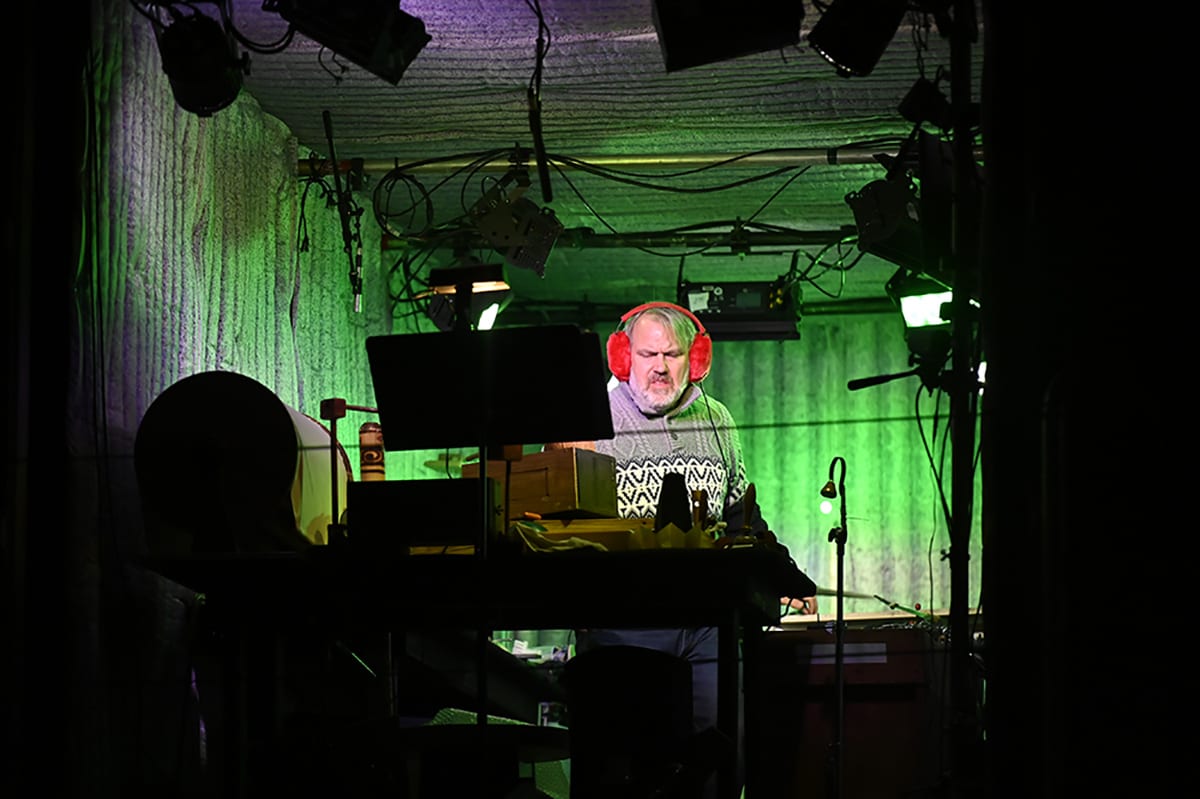 Despite being tucked inside an eight-foot-wide metal shipping container for his entire performance during “A Christmas Carol: The Live Radio Play,” Stuart Gerber says he stays pretty comfortable.

“They have a space heater in the container for me, so the temperature is fine,” says Gerber, professor of percussion in Georgia State’s School of Music.

Gerber is the sound effects artist for the Alliance Theatre’s interactive production of the classic Charles Dickens novella, “A Christmas Carol.” Because of the COVID-19 pandemic, this production is very different from years past.

Gerber is one of just four cast members, and the “stage” is a stack of large, open shipping containers in the Center Parc Stadium parking lot. The theatrical concept is a hybrid of live action and audio streaming from the cast, each of whom plays multiple characters.

As the sound effects artist, or “foley,” Gerber figures he creates about 70 different effects throughout the show. Some are very clear, like a window opening or a door closing. (“The set designers built me a physical window and door to open and close,” Gerber says.) Others require some creativity — such as how he clops coconuts and rustles leather straps to mimic the sounds of 19th-century London streets.

We caught up with Gerber to learn more about this unique holiday performance.

What was your reaction when you were approached to perform in this production?

I’ve always thought percussionists would be good sound effects artists. We’re always given strange and random sounds to play, so why not in a theatrical setting? I had always wanted to try this, so I was excited at the prospect. I had to put together a one-minute audition video of a story told only in sound for the director and others at the Alliance. After a couple of days, they told me I got the part. This is my first time trying my hand at live sound effects, and my first time involved with a production of this iconic play.

It’s definitely a unique experience. I’m not used to having such an oddly shaped workspace. The shipping container is long and narrow — it works fine, but my instruments go about halfway deep into the container. There are points in the performance when I’m at the back of my setup, nine or 10 feet away from the script I’m following. That presents a challenge as I’m used to reading music much closer. It just means that I had to memorize sections of the script, and I often have to know how many pages to turn to catch up with everyone else when I return.

How did you prepare for this project?

There are only four performers, three super-talented actors voicing all of the roles — and performing several carols within the story — and me doing the sounds. So, the sound is front and center as a very noticeable partner in the storytelling.

The idea of telling stories only through voices and sound, like radio shows of the ’30s and ’40s, is really interesting to me. The idea of letting the voice actors and sound effects help you paint your visual picture of the story is a different experience for most of the audience. It requires the audience to collaborate more, with everyone having different images of the story based on their imagination mixing with the voices and sound.

Luckily, the preparation was a real collaboration. Because of COVID, we had all preliminary work — about 90 hours of rehearsals — via Zoom. That was quite an experience, but for this, we made it work. Many of these rehearsals were just me, the director and sound designer discussing and experimenting with sounds in my studio. It was really a collaborative process.

Do you have any favorite sound effects that the audience should listen for?

My favorite sequence comes toward the end of the “Ghost of Christmas Yet to Come.” Since we’re dealing with the future, this is the most sonically abstract scene where Scrooge imagines, he really feels, that his body is in the ground. For lines like “the scratch, scratch of digging things,” I lightly rustle the hard bristles of a scrub brush, and for “the tiny sounds of some of the tiniest things, going about their tiny business: moving, feeding, growing, reproducing,” I gently squeeze a green pepper so you can hear the skin slowly cracking and squishing. It’s fascinating. Both of these moments happen in a one-minute sequence where I produce a lot of mysterious sounds that aren’t really intended to sound like anything specific, but to give an overall aural sense of the scene: a body inside the earth.

The Alliance consulted Vanessa Ament (Ph.D. ’14), a sound effects artist in Hollywood for more than 30 years who has a Ph.D. in communication from Georgia State. We had a couple of Zoom meetings with her, and she gave me some great ideas.

How might your work on this project set an example for theater companies adapting to the challenge of limiting in-person performances?

This production is amazing. Both the conception by the production team and the technical realization have been truly remarkable. I’m really lucky to be a part of this, and everyone at the Alliance Theatre deserves recognition for this unique production.

It will be interesting to see if any other companies take ideas or inspiration from this production. What we’ve all seen this year is that performing artists across disciplines have really had to be more creative than they already are to work within this reality. I think it will have lasting effects on the field and hopefully will continue to inspire more creative thinking moving forward. 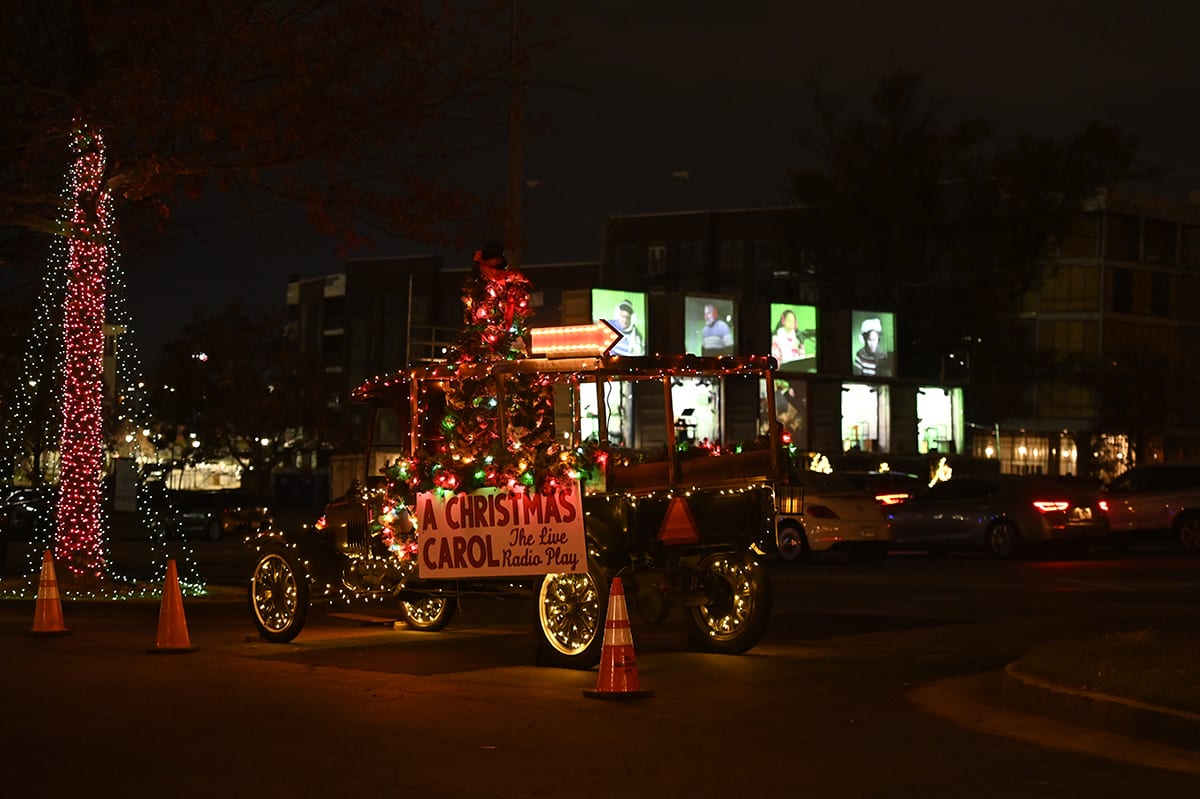