The Process of Making

Jamaal Barber (M.F.A. ’21) creates art to showcase the Black experience. His work has been shown in galleries and featured in the New York Times. As the printmaker, podcast host and father of two prepares for his biggest show yet, he looks back on past projects and discusses what his work means to him.

How did you get started as an artist?

I used to draw a lot as a kid, but I never even thought of becoming an artist. I never saw anyone in my community who was an artist, especially where I grew up in Littleton, N.C. So, art became something I did just to do.

Then I went to East Carolina University where I majored in communication arts, basically graphic design, and I started printmaking shortly after I graduated. 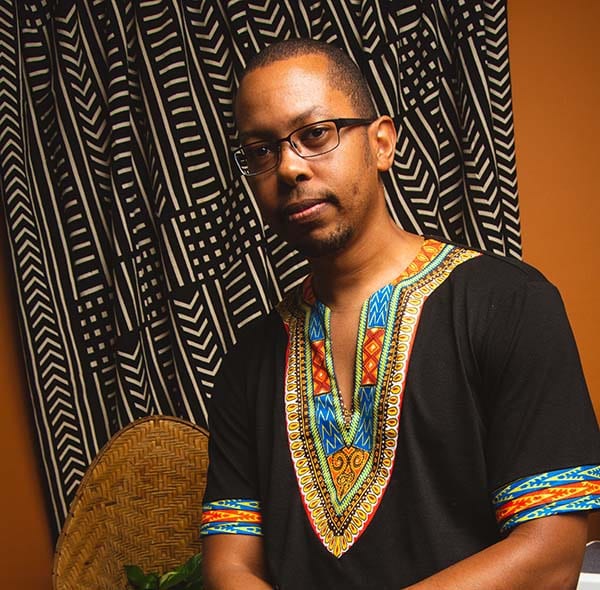 What inspired you to pursue printmaking?

I have always been interested in printmaking. I got laid off from a full-time job, and I realized it was the time for me to take a chance. I used my severance check to buy printmaking supplies and went for it completely. I decided that I had to make something that I was proud of.

As an artist, you spend a lot of time trying to make your place, and I found that place in printmaking. When I found this new style, I realized that through the process of printmaking — carving the wood, etching the design and painting the image — I could really own my creativity and develop my skills. It took years until I was finally settled. Most of my work has been about Black identity and what it means to be Black in America.

You also co-produce a podcast called “Studio Noize.” Tell us a little about that?

The podcast got started two years ago. I interviewed other Black creatives on Instagram Live, and then it became a weekly podcast to showcase and talk to Black artists. All artists just want to be understood, and especially as Black artists, we want to be heard.

It really became a part of my process. “Studio Noize” encourages me and I’ve learned as much from it as I hope everyone else has. It’s the conversations and connections with other artists that make art vibrate more. We’re really just kicking it on a mic, and there are more than 200 episodes so far.

You’ve been featured at the ZuCot Gallery and in The New York Times Magazine as part of The 1619 Project. How does it feel to achieve those recognitions?

You don’t get to sit with it too long. Yes, you’re in The New York Times, but you still have go about your life. You still have to make breakfast and take out the trash.

It’s a lot like art. As you’re making it, you’re thinking, “How can this be better?” You have to keep pushing. I’m never satisfied. It’s always the next piece. I always want to make sure I’m saying something else. It’s a never-ending mission. I’m always going to want to add to the conversation about life as a Black person in America.

You’re a father of two and your children seem to be an enormous part of your life. Are they a large influence in your work?

My whole life is about my family. They completely changed my life. When we had our first, and I held her in my hands and looked at her, I felt something inside of me be completed that I didn’t know was missing until I felt it.

Everything I do is about providing for them and my wife. My family and my art are my entire life. And, a large part of my art, I feel like, is me telling them their father’s story. Instead of a biography or trying to explain to them things they can’t understand yet, they can look at my art and maybe understand me better as their father.

At the beginning of the pandemic, a lot of artists thought it would be a great time for creation. Have you felt that inspiration?

No, quarantine was not good for me at all. I didn’t make anything for the first month. I lost motivation and was thinking about my kids and getting stressed about my situation.

I started making myself do one sketch a day. It took a lot time for me to wrap myself around what the purpose of art is when people are dying during a pandemic. But I realized to make art is to remain a sane individual. The need to create never disappears.

What’s on the horizon?

I’m currently working on my thesis and it will be done in the spring. I want it to be the big show. It’s time to unload. I’m going to make this show a blockbuster.