Lauren James remembers the moment she realized she wanted to be a software engineer.

“I was in seventh grade, working on an assignment,” James recalled. “Our teacher told us to explore careers in STEM (science, technology, engineering and math) and write a timeline of how we could accomplish that career. I chose computer software engineering, and as I was working on the assignment, I thought, ‘Yo! I can really see myself doing this.”

“By the end, I had literally planned out every single step,” she said.

Advancing her along her path to success is the 2019 Generation Google Scholarship. James, a rising junior in the Honors College at Georgia State University, is one of only 15 undergraduates in the United States and Canada to receive the $10,000 award, which goes to competitive scholars who are majoring in computer science and represent diversity and leadership in the field.

The financial benefit comes as a relief, James said. She worked three jobs her sophomore year, including a work-study assignment where she shadowed State Farm’s user experience design and mobile app development teams.

“I’ve always tried to pay for school completely on my own,” she said. 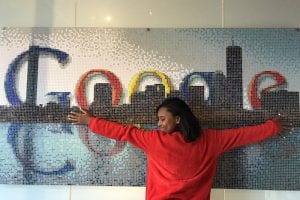 But even more valuable than money are the connections James says she hopes to make over the summer during the scholarship program retreat at Google headquarters in Mountain View, Calif.

“An internship is next in my plan,” said James. “I’ve always wanted to do software development at Google.”

Other 2019 Generation Google Scholarship recipients come from institutions such as Stanford University and the University of California, Berkeley.