The Show Must Go On

The Show Must Go On

Atlanta Film Society Executive Director Christopher Escobar (B.A. ’08, M.A. ’13) spliced his love of cinema and passion for preservation when he helped buy the iconic Plaza Theatre.
Use Scan QR Code to copy link and share it
By Jeremy Craig

With an office covered in classic film posters and Atlanta-themed art and curios, Christopher Escobar can’t hide his love for the city and great movies. Escobar is the executive director of the Atlanta Film Society, and nothing illustrates his devotion better than his beloved Plaza Theatre at the corner of Highland and Ponce de Leon avenues.

Taking a personal interest in Atlanta’s cinematic heritage, Escobar teamed up with some friends last fall to purchase the venerable movie palace, which has survived the city’s relentless change for more than 70 years. 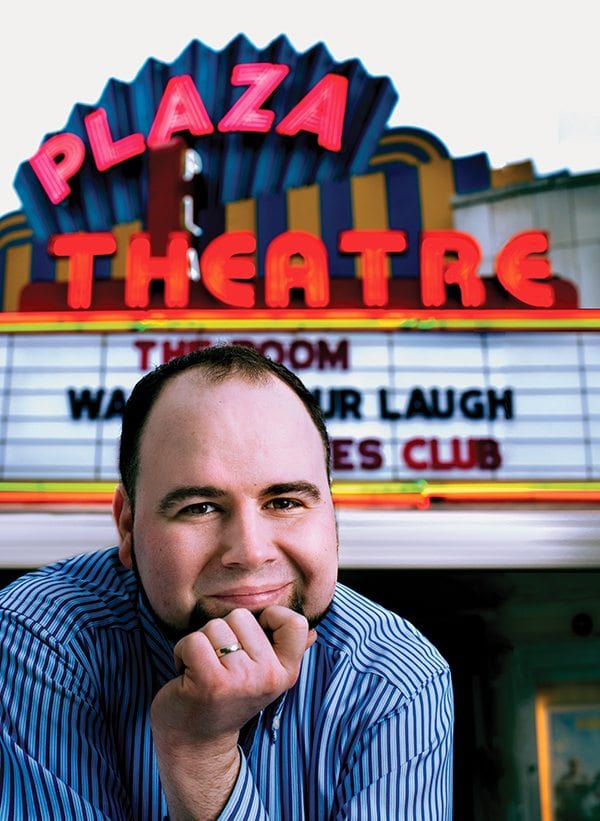 “The Plaza is in a position — and has an obligation — to preserve the cinematic experience,” said Escobar, who earned a place in the Georgia State Alumni Association’s inaugural “40 Under 40” class of distinguished alumni.

A single-screen cinema showing classic and independent films, the Plaza occupies a special niche in Atlanta — a quirky institution outside mainstream culture that locals adore.

“For people whose religion is movies, the Plaza is their temple,” Escobar said. “And service is not on Sunday mornings but on Fridays at midnight for ‘The Rocky Horror Picture Show.’ That’s part of the magic, things you can get there and only there.”

The Atlanta Film Society — which keeps its offices on the 10th floor of Georgia State’s 25 Park Place Building — organizes the annual Atlanta Film Festival, which made the Plaza its home base in the early 2000s.

Escobar has been the executive director for the Atlanta Film Festival since 2012. He says the decision to buy the Plaza was due in part to the ties between the film society and the theater, and his desire to keep the festival there.

As the nearby Freedom Park testifies, preserving special buildings and unique places has rarely been Atlanta’s first priority. It’s a beautiful place now, but it used to be a thriving neighborhood full of historic houses called Copenhill. The district was razed in the 1970s to make way for a new freeway interchange. After citizens revolted, the freeway plans were scrapped, but the damage had been done. To cover the scar, the state turned over the land to the city, which turned it into a park.

The theater may have survived the bungled freeway project, but it’s still at risk. The community has long feared the Plaza could also get lost to development.

For Escobar, development isn’t necessarily bad, but Atlanta needs more balance to preserve those things it can no longer replace.

“These issues don’t have simple answers,” Escobar said, “but I have a sense of responsibility to do everything I can to not only save something special but also make it thrive.”

That’s why he and his partners have already started investing in upgrades for the facility. They’ll introduce better technology and restore the theater to its original two-screen design.

Atlanta provides a perfect case study for Escobar to emulate as he leads the Plaza going forward — another historic venue that was nearly lost, the Fox Theatre.

Outspoken Atlantans saved the ornate performance hall from becoming just another parking lot. Decades later, the Fox is a point of civic pride and a major institution that hosts the city’s top acts.

“I’d like the Plaza to thrive like the Fox does,” Escobar said. “People might go years without buying a ticket, but they love that it’s there. They have a sense of ownership, and it’s a major economic driver for the neighborhood and the whole city. I want the Plaza to be for cinema what the Fox is for live performance.”