The Book on Panther Sports

The Book on Panther Sports

Ed Gadrix (B.B.A. ’65) pens the history of Georgia State athletics from its humble beginnings to its inaugural season in a major league stadium.
Use Scan QR Code to copy link and share it
By Jerell Rushin (B.A. ’19)

Ed Gadrix Jr. is a true-blue believer. Ever since he stepped foot on campus, he yearned for the day when the Panthers could make it to the Big Dance or win a bowl game. 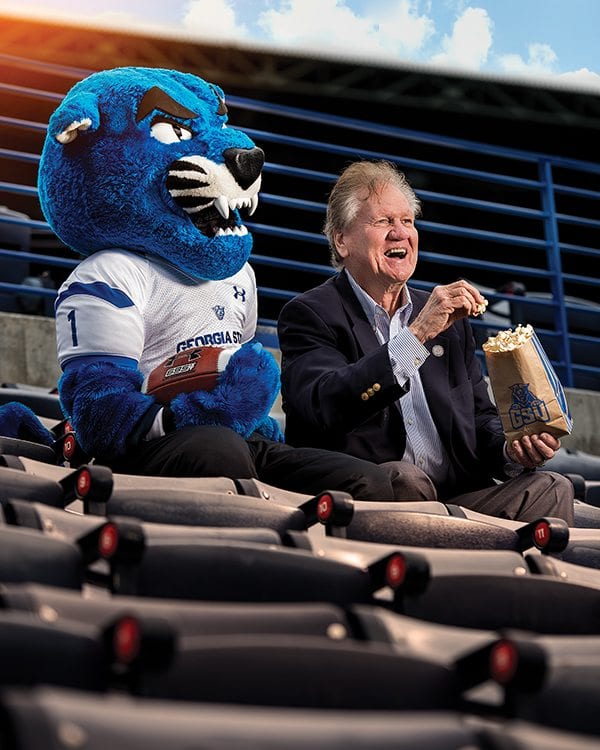 Back in the 1960s, he co-founded Georgia State’s first athletics booster group, the “Panther Club,” and sold Coca-Cola and candy to basketball fans when the team played at the old O’Keefe High School gym near Georgia Tech.

“There couldn’t have been more than 50 people there a night,” Gadrix said.

Not long after he graduated, Gadrix, an attorney, began compiling the history of Georgia State sports, a labor of love he’s kept up for more than three decades. The result of his work is his new book, “Panther Pride,” that chronicles Georgia State’s sports history since the school’s founding in 1913.

Gadrix researched athletics records from Georgia State and Georgia Tech and spent hours in the archives of the Georgia State Library, poring through yearbooks and issues of The Signal, Georgia State’s student newspaper.

“The Signal is the reason I could get a lot of this information,” he said.

Gadrix served eight years on the Georgia State Athletics Board and was an early proponent for football. In his book, he lays out the myriad challenges Georgia State experienced to get to those NCAA Basketball Tournament wins and last year’s AutoNation Cure Bowl football victory.

“Panther Pride” opens with the line: “Struggle — continuous struggle — characterizes Georgia State’s history. … Intercollegiate sports struggled to survive, first in [their] formation, then through the doldrums and the ‘dark days’ of the 1960s and ’70s.”

“It’s amazing to think that now we have this incredible stadium, and our football team just won a bowl game,” Gadrix said. “We’ve come further than any college athletics program in history. I really believe that.”