The Center for Sport and Urban Policy is honored for its work helping sports organizations become leaders in sustainability.
by Jennifer Rainey Marquez 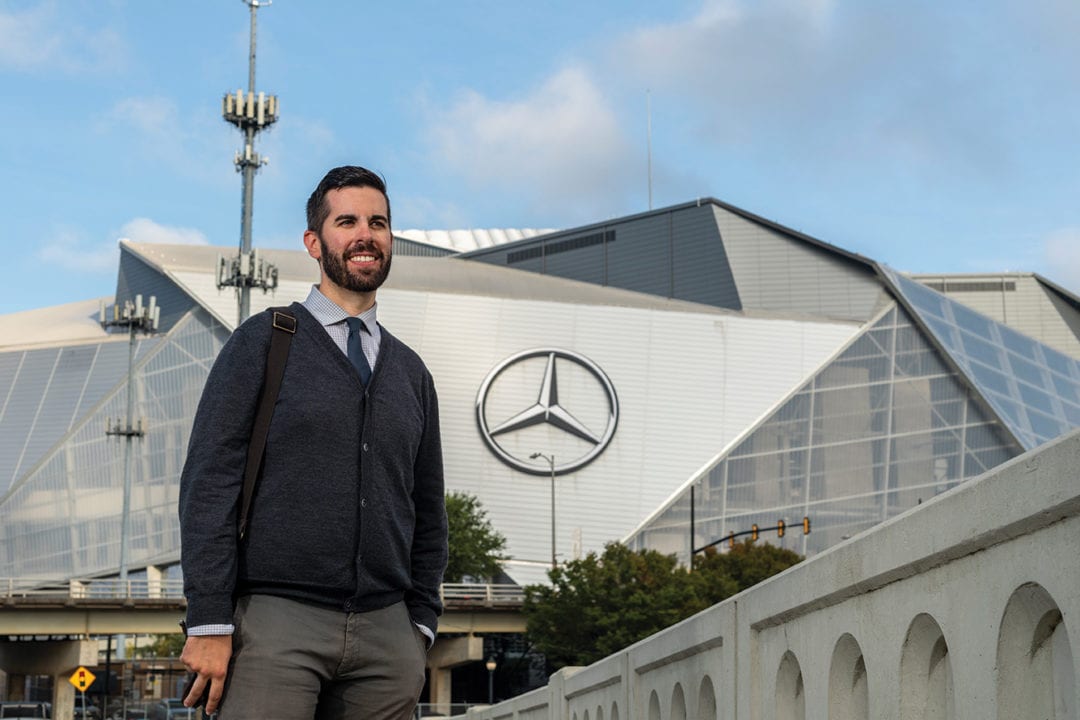 Consider the environmental impact of a single sporting event. Fans travel to and from the game in their cars. They may leave their vehicles idling or run generators while tailgating outside the stadium. Inside, the game generates hundreds or even thousands of pounds of waste — think of the napkins and plastic beer cups alone. Lights flicker on, air conditioning units hum and toilets are flushed.

“Every level of the fan experience has some sort of environmental impact,” says Tim Kellison, assistant professor of kinesiology and health. “And while more sports organizations are thinking about sustainability these days, there’s a lot of public awareness and education and research that still needs to be done.”

Kellison is the director of the Center for Sport and Urban Policy, which studies the intersection of sports and cities, with a particular focus on sustainability. Introduced by the College of Education and Human Development in 2016, 20 years after the Centennial Olympic Games, the center aims to bridge the gap between academic research and the sports industry. Its work informs government agencies and organizations such as professional sports leagues about the way “green” stadiums and initiatives can contribute to environmentally sustainable development in their cities.

The center has studied the environmental impact of so-called “mega” sporting events such as the Olympics and the Super Bowl. It has worked with the Australian government to develop a framework to guide sustainability efforts for sports organizations in Australia. Last year, center researchers co-authored the United Nations’ Sports for Climate Action Framework, which calls on sports organizations to collectively support and promote sustainability and advocate for climate action. Since the framework was released, 50 organizations have signed on, including the New York Yankees, the National Basketball Association and the U.S. Tennis Association.

In June, the Center for Sport and Urban Policy was the first and only academic group to receive the Environmental Innovator Award from the Green Sports Alliance, which leverages the influence of sports to promote healthy, sustainable communities. When presenting the award, the alliance noted the center’s involvement in the Playoff Green program at the 2018 College Football Playoff national championship game, where more than 40 Georgia State students, faculty and staff served as Green Ambassadors to promote sustainable behavior. Kellison and the center’s co-director, Beth Cianfrone, associate professor of sport administration, are already talking with the organizers of the NCAA Men’s Final Four, which Atlanta will host next April, about helping with their sustainability initiatives.

“It’s becoming increasingly clear to sports organizations, from both an economic and a community engagement perspective, that they need to consider their environmental footprint,” says Kellison. “We’re working to help more teams do more.”