Making It Up as You Go Along

Making It Up as You Go Along 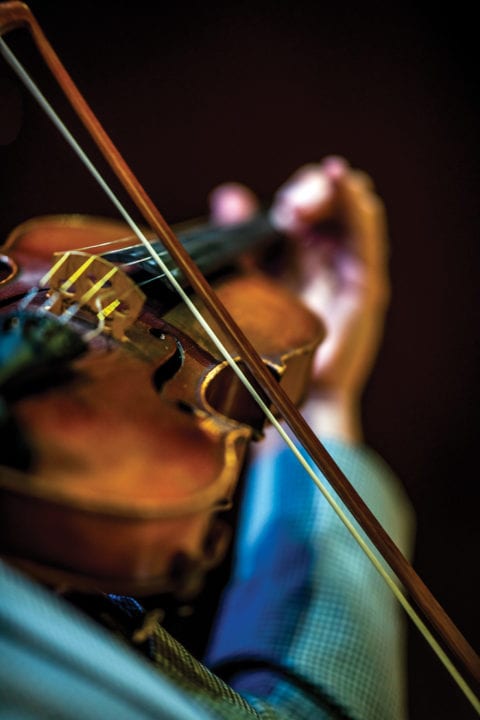 Jazz artist Louis Armstrong once said, “never play a thing the same way twice.” Although musical improvisation — composing new passages on the spot — is not unique to jazz, it’s perhaps the genre’s most defining element. While improvised jazz solos are spontaneous, there are rules, says Martin Norgaard, associate professor of music education.

“In tonal jazz, improvisation is not ‘free,’” he says. “It’s always tied to the chord structure that the melody is based on.”

In other words, improvisation is an incredibly complex form of creative expression, yet great jazz improvisers like Charlie Parker, Miles Davis or John Coltrane make it seem effortless. Which makes you wonder: what’s happening inside jazz players’ brains as they simultaneously compose and play music?

“As a musician, you feel that there’s something different about the way your brain is working when you improvise,” says Norgaard, a violinist who came to the U.S. in 1985 to study jazz. “You’re tapping all your stored knowledge and adapting it to a chord structure in real time.”

While earning his Ph.D. from the University of Texas at Austin, Norgaard began studying the effects of musical improvisation: interviewing jazz artists and students about their thoughts during the process of improvisation, analyzing the solos of Charlie Parker for patterns and asking musicians to perform a secondary task while improvising to see how it affects their performances.

Last spring, he teamed up with Mukesh Dhamala, associate professor of physics and astonomy, and asked advanced jazz musicians to sing pre-learned and improvised music while undergoing functional magnetic resonance imaging, a test that measures activity in the brain.

In the study, published in Brain Connectivity, the researchers found decreased brain connectivity during improvisation. Norgaard says the finding isn’t as surprising as you might think.

“This idea of ‘flow’ — where you’re completely immersed in an activity — has been linked to deactivation of some brain areas,” says Norgaard. “It may be that performing improvisation engages a smaller, more focused brain network, while other parts of the brain go quiet.”

In his most recent study, published in August in the Journal of Research in Music Education, Norgaard examines the “far transfer effect” of improvisation — how learning to invent music in the moment affects other cognitive abilities.

The researchers started by conducting a pre-test, in which they asked two sets of middle school kids to each perform two tasks: one that tests cognitive flexibility, or the brain’s ability to task-switch, and another that tests inhibitory control, or the brain’s ability to focus on relevant information and block out irrelevant information. The middle-schoolers played instruments, but only some studied jazz through the Georgia State Rialto Jazz for Kids program. They found that the jazz students drastically outperformed their concert band peers.

“Still, we didn’t know: are kids with high levels of cognitive flexibility simply drawn to jazz, or is it the improvisation that produces the effect,” says Norgaard.

To follow up, he and his collaborators asked the school’s band director to divide his entire concert band — 155 7th and 8th graders — into two groups. Each group learned about jazz, but only half learned improvisation. Then each group was given the same two brain tests. The result: improvisation training led to a significant improvement in cognitive flexibility.

“Their scores started looking like the scores of the kids who had studied jazz from the pre-test,” says Norgaard.

The improvements were only apparent in the 8th graders; 7th-grade students instead saw a small improvement in inhibitory control.

“It’s hard to say what’s driving the difference in effect. Maybe it’s the age of the kids or maybe it’s the number of years spent playing an instrument,” says Norgaard. “In the future, we need to look into whether improvisation has different cognitive effects depending on a student’s age or experience.”

Metro Atlanta needs more science and math teachers. It also needs more diverse teachers. A new Georgia State project aims to deliver both.
by Jennifer Rainey Marquez
Professor Cynthia Nau Cornelissen on her work to develop the world's first vaccine against a sexually-transmitted superbug.
interview by Jennifer Rainey Marquez
Professor Sang-Moo Kang may have found a way to make a safe vaccine for RSV, an infection that hospitalizes more than 50,000 infants every year.
by LaTina Emerson
At the Center for Research on Interpersonal Violence, Georgia State faculty are helping to stop assaults.
by Jill Neimark