Luz Lituma (B.B.A. ’11), an avid hiker and adventure lover, founded LatinXhikers to promote a culture of diversity in the outdoors and to help protect and preserve our lands for the future.
Use Scan QR Code to copy link and share it
By Abby Carney (B.A. '08)

Luz Lituma is making up for lost time. All through her adolescence, the once-shy Lituma spent most of her time in the library, making friends with books.

“When I was younger, I didn’t socialize or get out,” she said. “I think that’s why I love to travel and meet people now. I have stuff to go do.” 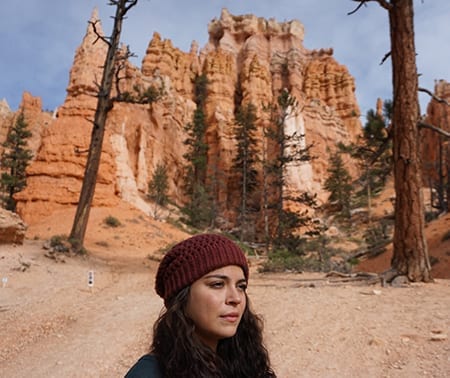 “Bryce Canyon has a very special place in my heart. It’s my favorite place. I can’t really pinpoint why, but once I’m there, I feel it. I feel at peace.” Lituma at Bryce Canyon National Park in southern Utah.

A far cry from the reserved girl who once hid in the library, Lituma is now the co-founder of LatinXhikers, a movement to bring more diversity to outdoor hobbies and recreation. (A gender-neutral alternative to “Latino” and “Latina,” the word “Latinx” refers to people of Latin American origin or descent.)

She traveled a bit in college but only to big, tourist-clogged cities. The experiences left her unsatisfied, so she decided to go on a different kind of adventure. She went to Peru to hike the punishing Rainbow Mountain Trail.

“I didn’t know what I was getting into,” she said. “They made it sound easy. It wasn’t.”

The trip left Lituma with a strong case of wanderlust, and she leaned all the way into it. Changing the way she traveled, she decided she’d never again travel to big cities. Landscape travel became her passion.

A couple of years ago, Lituma and her friend Adriana Garcia started hiking together frequently in north Georgia. They formed LatinXhikers in August 2017 after walking through an REI store and wondering where all the brown people were.

“In places like that, we rarely see anybody that looks like us,” she said. “There’s always a tall white man on the posters. In part, we just wanted to bring awareness — to say, ‘Hey, we’re out here. You guys should market to us, too, so we feel a little bit more comfortable.’”

They wanted to inspire other people of color to get outside and form relationships with nature, not just to enjoy it but also to help care for it. On Instagram, they shared inspiring personal stories about how spending time outdoors had helped them overcome fears and changed their lives for the better.

Their message spread quickly, and the reception was overwhelmingly positive. Before long, REI reached out with an offer to sponsor their social media posts and host meetup hikes in Georgia and elsewhere. Lituma, Garcia and two of their friends became the faces of REI’s 2018 summer campaign. The four pals can be seen snorkeling, beach camping, kayaking and living it up on an ultimate outdoor adventure on Mexico’s Baja coast.

Lituma continues to travel freely, and those travels are grist for the mill — inspiration for documenting her adventures for LatinXhikers, growing the movement and getting more bodies outside.

Lituma’s come a long way since her wallflower days. She only wishes she’d discovered her passion sooner.

Panther placekicker-punter Brandon Wright’s biggest cheerleader is his mom, Erica Wright Bracey (MBA ’01), who might have as much — or more — Panther cred as her son.
By Torie Robinette
Professor emerita, nutrition consultant and author Chris Rosenbloom (Ph.D. ’89) tells us how folks of all ages can create healthy habits that can last a lifetime.
Interview by William Inman (M.H.P. '16)
Adebola Akinola-Aguda (B.S. ’15) writes programs for robotic systems that solve lots of problems for other people.
By Monica Elliott
Angelina Bellebuono (B.S.Ed. ’92) runs a sanctuary for rescued goats where visitors can come connect with nature — and themselves — to find peace.
By Maya Kroth