Panther placekicker-punter Brandon Wright’s biggest cheerleader is his mom, Erica Wright Bracey (MBA ’01), who might have as much — or more — Panther cred as her son.
Use Scan QR Code to copy link and share it
By Torie Robinette

As the team bus rolls into the Blue Lot at Georgia State Stadium on a steamy Saturday morning in late September, Brandon Wright snaps out of a daze. Headphones on, he’s been deep in thought, staring a hole into the seat in front of him and bobbing his head to the latest from rapper Chief Keef.

The energy from the crowd huddled outside in the lot has hit a fever pitch. Filing off the bus, Wright scans the fans for his mom, Erica Wright Bracey (MBA ’01), and spots her in one of her custom No. 93 Panther jerseys, her cheeks tattooed with electric-blue eye black. Meeting for the Panther Walk two hours before kickoff is their mother-son home game tradition. 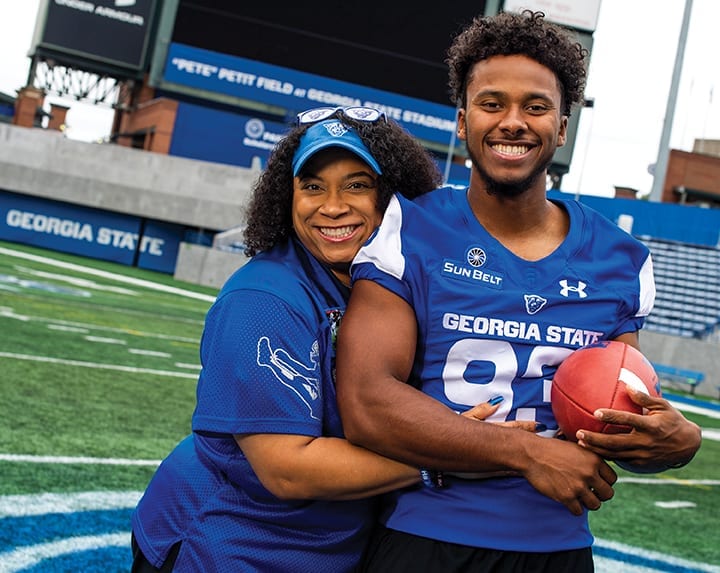 Erica Wright Bracey (MBA ’01) and No. 93 Brandon Wright, the top punter in the Sun Belt.

“Go beat ‘em!” She shouts. It’s the first chance she and Wright have had to talk today, save the text she shot him earlier — “The greatness is already inside of you.”

Three years in as placekicker and punter for the Panthers, Wright’s routine has become second nature, but he’s still surprised at times by the way his life’s story has written itself.

He grew up competing in every sport, it seemed, except football. When Wright started his freshman year of high school at KIPP Atlanta Collegiate, the football coach there, who had gotten word of his soccer talent, approached him about tryouts. Wright made the team, and by his senior year, college scouts came to see him in action. On signing day, Wright committed to Georgia State where his mom has been on staff for more than a decade.

“The ongoing joke in the family is, like, ‘Wait, what happened? You’re playing Division I football — and you’re good?’” says Bracey.

Wright’s not just good, he’s really good. With a 48.4-yards-per-punt average, the junior is the top punter in the Sun Belt Conference and the number three punter in the nation. He ranks second in school history with 19 career field goals.

Leading a support squad isn’t anything new for Bracey. A little more than a year in as head of Georgia State’s business incubator LaunchGSU, she’s been billed as “chief cheerleader” and “encourager extraordinaire” for student entrepreneurs.

Before taking the helm of the incubator, she worked for Georgia State — where she also earned her MBA in 2001 — in the Small-Business Development Center for 11 years.

Now that her son is on campus, Bracey admits she’s “turned things up on a notch” when it comes to her school pride. She’s referring to the jersey-making heat press in her kitchen. Her latest creation is a bright pink jersey to spread awareness for breast cancer (for which she’s in remission).

With hectic schedules, Bracey and Wright don’t exactly bump into one another on campus. But Bracey’s learned she can entice her son with the promise of a good meal, an offer that keeps him coming to visit for dinner several times a week.

But football is the unexpected bridge that’s united them every weekend.

Still, they know these moments are fleeting. Wright, a two-time Athletic Director honor roll student, will graduate in May 2020.

Wright plans to translate his degree in exercise science into a career as a high school or college athletic director, but that might have to wait if his NFL dreams materialize. If so, Bracey and the family will happily shift their schedules to Sunday football and travel anywhere. For now, they’ll keep their fine-tuned routine running.

Professor emerita, nutrition consultant and author Chris Rosenbloom (Ph.D. ’89) tells us how folks of all ages can create healthy habits that can last a lifetime.
Interview by William Inman (M.H.P. '16)
Adebola Akinola-Aguda (B.S. ’15) writes programs for robotic systems that solve lots of problems for other people.
By Monica Elliott
Angelina Bellebuono (B.S.Ed. ’92) runs a sanctuary for rescued goats where visitors can come connect with nature — and themselves — to find peace.
By Maya Kroth
Luz Lituma (B.B.A. ’11), an avid hiker and adventure lover, founded LatinXhikers to promote a culture of diversity in the outdoors and to help protect and preserve our lands for the future.
By Abby Carney (B.A. '08)