Angelina Bellebuono (B.S.Ed. ’92) runs a sanctuary for rescued goats where visitors can come connect with nature — and themselves — to find peace.

Angelina Bellebuono (B.S.Ed. ’92) knows goats can teach us a thing or two about human nature.

Seated in the sunlit dining room of her restored 1880s farmhouse in Rutledge, Ga., she looks every bit the southern farmer in a floor-length denim skirt, burlap apron and leather boots, her auburn hair clipped up in a messy bun. Laid out on the lace tablecloth, next to a bundle of charred sage, is her “goat oracle” deck, 24 tarot-like cards, each printed with an image of one of the rescue goats that have passed through the pastures of Oakhaven, her five-acre farm in rural Georgia. Just recently, Bellebuono and her husband began receiving visitors to Oakhaven to foster “healing, meditation and magic” — with the goats as guides.

“We had no idea the goats would completely change our lives,” says the former journalist and College of Education & Human Development alumna.

Amid flickering candles and burning incense, she asks me to hold the deck in my hands and carefully pick three cards that might provide some insight into my own life. It turns out that my cloven-hoofed familiar is a small fainting goat named Nina Simone, whom Bellebuono describes as fearless, independent and “super self-aware.” I take it as a compliment.

Bellebuono’s face lights up when she talks about the goats, explaining the history and personality of each animal, all of whom are named after musical greats. From herd king Townes (named for Townes Van Zandt) to full-figured dairy goat Lucinda (as in Williams), each has a story of being abandoned, rejected by their mothers or otherwise ill-equipped for whatever life their former owners had in mind for them — whether clearing brush, producing milk or being meat. So, they wound up here.

Bellebuono and her husband, an engineer, escaped from metro Atlanta to Rutledge, a tranquil agricultural town of 800, more than two decades ago.

“We both grew up in the suburbs and hated it,” says Bellebuono, who always dreamed of owning an old farmhouse in the country.

When they first toured the Oakhaven property, it was a mess. The local kids were using it as a party house, there was a mattress on the floor and the land was in distress from years of cotton cultivation. At first, the goats were a practical solution for managing the brush. They started with four — Etta, Aretha, Loretta and June — before taking in week-old Gypsy, their first rescue goat, who had to be bottle-fed. When Gypsy died from a dog bite 18 months later, Bellebuono was devastated.

She started taking in other rescues and learning more about the goats’ nature and rhythms, finding the process deeply meditative. Now she wants to share that experience of living close to nature with others. When visitors come to the farm, they are given small paper sacks and invited to walk the property slowly and ask the earth for permission to collect any leaves, feathers, flowers or other ephemera that catch their attention. Signs in the pasture ask guests to “live simply” and “make the ordinary a meditation.” 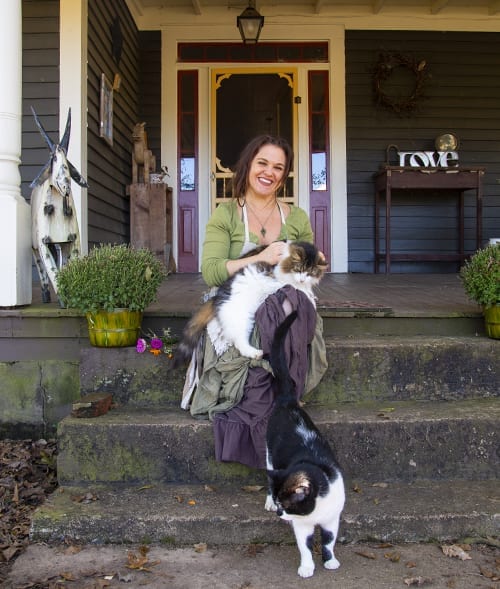 Bellebuono at home at Oakhaven with two other furry family members.

As if the oracle cards weren’t enough indication that Oakhaven is not your average petting zoo, the hand-painted literary quotes that adorn the barnyard hint at Bellebuono’s past life as a schoolteacher. There’s a little Emily Dickinson scrawled on the chicken coop and a line from Dr. Seuss carefully lettered onto some old fence posts for the neighbors to contemplate as they drive by. “Compassion is an action word with no boundaries!” reads another, quoting singer-songwriter Prince.

“I knew I was never going to be a salesperson,” says Bellebuono, who worked as a middle and high school English teacher and a journalist for the Morgan County Citizen before becoming the “goat mistress” of Oakhaven. Even though she’s no longer in the classroom, she’s still an educator, teaching visitors how to slow down and forge a connection with the natural world — and, she hopes, with their own true nature.

“I call myself a joy concoctress,” she says. “I love sharing and getting people closer to knowledge — helping them get the light to come on.”

Bellebuono has welcomed about 150 visitors since opening the sanctuary to the public about a year ago, and she’s in the process of making Oakhaven a 501(c)(3) nonprofit organization.

“This farm is for healing,” she says.

Her free-form farm encounters vary based on the energy each group of visitors brings, often including guided meditations that result in profound conversations on life and death, humanity and nature. A woman whose father had recently died had a transformative experience with the farm’s butterflies, and some middle schoolers once wound up debating what it means to die a good death.

“We find our own medicine,” says Bellebuono, who encourages her visitors to ruminate on life’s big spiritual questions while also reveling in the smaller moments. “I want people to take what they need from here. Whether that’s laughter because a goat sneezed or something else entirely, take it.”

The bookshelves in Bellebuono’s home reflect the far-flung influences that inform her approach to her work at Oakhaven — positive psychology, neuroscience and world literature alongside the occult. Whatever she does, it works. As I sit on her front porch at the end of the visit and listen to birdsong from the magnolia tree with Bellebuono’s lovable farm cat snuggled in my lap, it’s hard not to feel at peace.

That’s when Bellebuono lets me in on her big secret.

“The sanctuary isn’t for the goats,” she says. “It’s for people.”

Adebola Akinola-Aguda (B.S. ’15) writes programs for robotic systems that solve lots of problems for other people.
By Monica Elliott
Luz Lituma (B.B.A. ’11), an avid hiker and adventure lover, founded LatinXhikers to promote a culture of diversity in the outdoors and to help protect and preserve our lands for the future.
By Abby Carney (B.A. '08)

Adebola Akinola-Aguda (B.S. ’15) writes programs for robotic systems that solve lots of problems for other people.
By Monica Elliott
Luz Lituma (B.B.A. ’11), an avid hiker and adventure lover, founded LatinXhikers to promote a culture of diversity in the outdoors and to help protect and preserve our lands for the future.
By Abby Carney (B.A. '08)