As executive director of the Atlanta Bicycle Coalition, Rebecca Serna (M.S. ’07) is focused on improving infrastructure for all modes of travel.
By Michael Davis (B.A. '03)

While working and traveling as a paralegal, Rebecca Serna got to know public transit systems across the United States. She had grown up in Atlanta riding MARTA’s trains and buses but realized there was room for improvement.

She was also looking to make a career change. 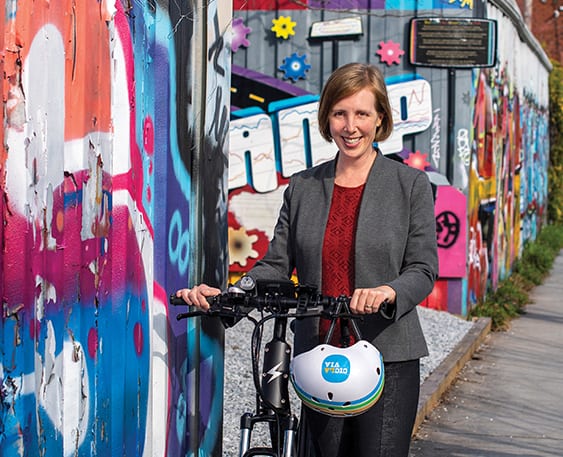 “I was kind of used to the way things were, but I was traveling to all these cities that had much better transit than Atlanta,” she said. “That’s how I got interested in transportation.”

That interest led to advocacy and eventually to the position she’s held since 2007 as executive director of the Atlanta Bicycle Coalition, an organization focused on safe spaces to ride and, more recently, sustainable transportation.

While working on her master’s degree in urban policy studies at the Andrew Young School of Policy Studies, Serna spent 2006 on a Fulbright Fellowship in Bogotá, Colombia, learning about participatory planning. After the Fulbright, she interned in the bicycle and pedestrian office of the Georgia Department of Transportation.

“It gave me a greater understanding of the planning environment and how that intersected with policy,” Serna said of her master’s program. “Here at the Atlanta Bicycle Coalition, we’re trying to change the infrastructure, but policy is very closely intertwined with how those changes play out. The policy decisions really come first and govern how the built environment works, feels and looks.”

Serna has led the Atlanta Bicycle Coalition through an expansion of its roster from around 200 members in 2007 to more than 1,500 today. Over the past year, she’s also led the group as it has broadened its focus from advocating for bicycle safety and mobility to championing safer, sustainable transportation for motorists, cyclists and pedestrians.

As the coalition developed its new mission, it examined traffic crash data from neighborhoods throughout the city. Serna said the highest rates of serious injuries and fatal traffic crashes tend to occur in areas already struggling with income inequality, educational disparities and high incarceration rates.

The group’s Vision Zero campaign encourages planning practices to eliminate traffic deaths. Among the coalition’s policy priorities for 2020 is advocating for a uniform speed limit of 25 miles per hour in Atlanta.

“We feel like where we can make the most difference is in the street,” Serna said. “We’re really trying to reclaim the street for people. Everyone needs a way to get around that’s reliable, affordable and safe.”

A background role for Shahreen Elahi (B.S. ’18) in “Spider-Man: Homecoming” brought a glaring lack of Muslim representation in TV and film front and center.
Interview by Torie Robinette Durham
While this baseball season may have been thrown a curveball, Georgia State’s new baseball coach Brad Stromdahl — a former assistant coach for the Panthers — is excited about the program’s future.
By Austin Birchell (B.A. ’20)
Researchers in the School of Public Health are helping stabilize Georgia families affected by substance abuse.
By Jennifer Rainey Marquez
Author Tom Chaffin (B.A. ’77) digs deep into the past to uncover some of history’s most intriguing stories.
By Michael Davis (B.A. '03)