Welcome to the Academy

With a love of film nurtured when she was child in Zimbabwe, Sue-Ellen Chitunya (A.A., A.S. ’05; B.A. ’10) has carved out a successful career in cinema working on Hollywood blockbusters and as a producer of independent films. Now, she’s a member of the Academy of Motion Picture Arts and Sciences and will help pick next year’s Oscars.

Sue-Ellen Chitunya (A.A., A.S. ’05; B.A. ’10) was only 7 years old, but she remembers it perfectly — sitting in her uncle Andrew’s dusty, white Datsun at a drive-in theater in Zimbabwe when Arnold Schwarzenegger took the screen. Andrew had snuck her in under a blanket in his backseat to see “Terminator 2: Judgment Day.”

“I remember watching the film and being awed by the moving pictures, even though I didn’t fully comprehend what was going on,” says Chitunya. “I fell in love with film, and a lot of that had to do with my uncle.” 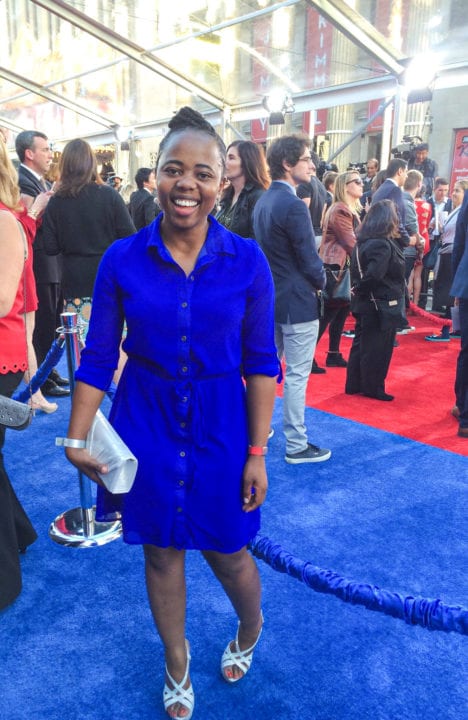 Chitunya at the 2016 premiere of “Captain America: Civil War.” Photo by Heather Mason.

Today, Chitunya, a Georgia State Alumni Association 40 Under 40 honoree, is on the other side of the screen, helping shape and deliver the cinematic experience that so moved her. She’s an award-winning filmmaker with a wide body of work.

Her credits include roles as post-production coordinator for Marvel Studios blockbusters like “Black Panther” (2018), “Ant-Man and The Wasp” (2018) and “Avengers: Endgame” (2019). She’s produced a handful of short, independent films, including “Team Marilyn” (2019), “Restoring Focus” (2018) and her all-time favorite, “Get the Life” (2016), an award-winning production about a transgender teenager challenged by an unwanted pregnancy. “Get the Life” has been screened at film festivals around the world and has been incorporated into some college curricula.

Chitunya is also part of the newest class of artists invited to join the Academy of Motion Picture Arts and Sciences, an organization of a little more than 10,000 members known for hosting the annual Academy Awards. As a voting member of the academy, she’ll help select next year’s Oscar winners.

Despite her resume, Chitunya said she was stunned by the exclusive honor, which, she’s quick to point out, is based on her work as a producer of short films.

“Her tireless quest to hone her skills and enhance her knowledge about the filmmaking industry is remarkable,” Ebert says. “It’s no wonder the academy took note and extended an invitation.”

As CEO and publisher of Ebert Digital, which publishes the film-review website RogerEbert.com, Ebert also heads up the Roger and Chaz Ebert Foundation Fellowship. Chitunya became an Ebert Fellow in 2016.

That same year the Zimbabwe International Women’s Awards presented her with its Media Professional of the Year honor.

“BEING IN THE ACADEMY IS A BIG DEAL. TO HAVE SUE-ELLEN — A YOUNG, TALENTED, BLACK, FEMALE ARTIST — RECOGNIZED BY THIS ORGANIZATION IS SO IMPORTANT.”

“BEING IN THE ACADEMY IS A BIG DEAL. TO HAVE SUE-ELLEN — A YOUNG, TALENTED, BLACK, FEMALE ARTIST — RECOGNIZED BY THIS ORGANIZATION IS SO IMPORTANT.”

Growing up in Zimbabwe’s capital of Harare, Chitunya continued to feed her passion for film after her uncle Andrew died. She saved “pocket money” from her grandmother and went to see movies whenever she could find the time.

Andrew had been a “cool,” playful father figure, but her grandfather kept her focused, insisting she make school her priority, says Chitunya, who speaks multiple languages.

When her senior year of high school arrived, Chitunya moved to the United States to live with her mother. As soon as she graduated, her mother suggested she take college courses.

In 2002, Chitunya enrolled at what is now Georgia State’s Perimeter College as a pre-med student with plans to become a doctor. But a required art elective, Introduction to Film Studies, altered her course. 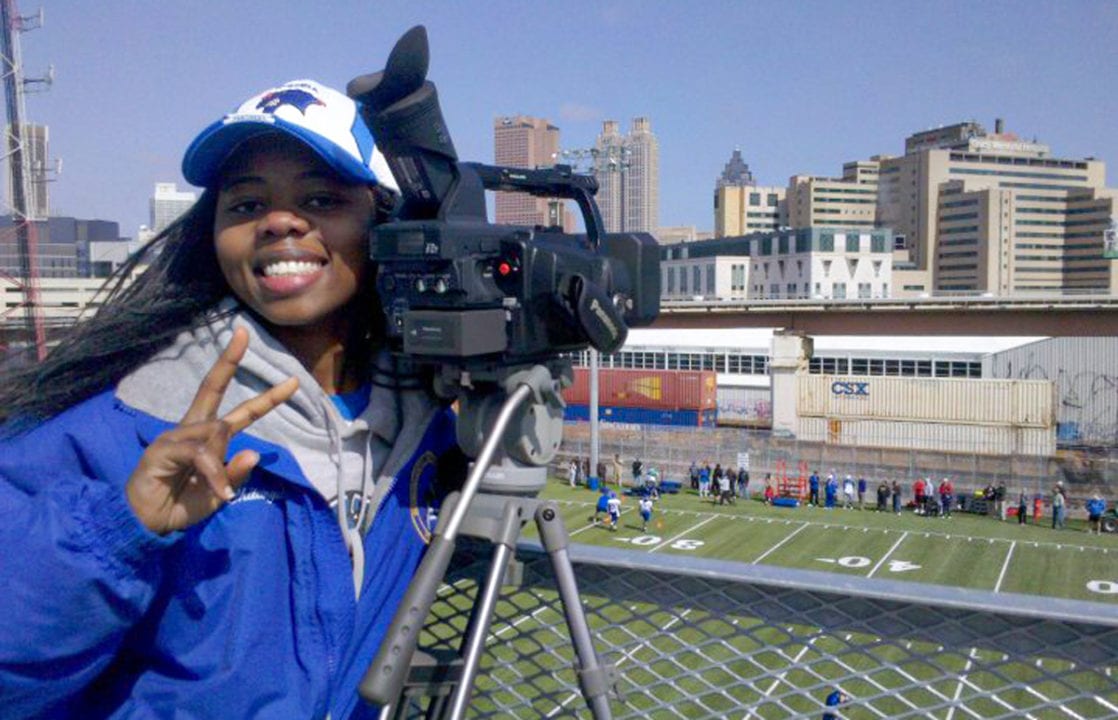 She considered changing her field of study but chose instead to add communications as a second major.

And if her coursework weren’t enough, Chitunya joined a variety of campus organizations. She was chief justice on the College Court and took on a student assistantship at Perimeter’s Clarkston Campus library.

Lois Shelton ran the library when Chitunya worked there, and the two developed a close relationship. Shelton even called Chitunya her adopted daughter.

“When I talk with Sue-Ellen, I always let her know how proud I am of her,” Shelton says. “I often tell her I can’t wait for her next big move.”

When she got word of Chitunya’s invitation to join the Academy of Motion Picture Arts and Sciences, Shelton couldn’t contain herself.

“Being a member of the academy is a real big move,” she says. “I’m a proud momma!”

Chitunya earned two associate degrees from Perimeter in 2005 and then transitioned to Georgia State’s Atlanta Campus, where she flourished as a film and biology student. She recalls going to see an academic adviser who seemed amused by her divergent interests.

She trained as a coxswain in the rowing club, studied abroad, joined the African Students Association and participated in the National Academy of Television Arts and Sciences Southeast Chapter as a student member. She even filmed the Georgia State football team’s practices.

After Chitunya graduated from Georgia State in 2010, she headed to Los Angeles where she earned a TV and film producing certificate at UCLA.

With her inclusion as an academy member, Chitunya recognizes her potential to help others aspiring to work in film. She enjoys mentoring young filmmakers and has immersed herself in learning about academy membership responsibilities and benefits, which include access to a reservoir of resources to help hone her craft.

“I’m a scholar of the arts, I’m a fan of the arts and I am a maker of the arts,” she says. “My love for film resides at the intersection of these three.”

Chitunya was recently selected by Film Independent, a nonprofit that supports emerging filmmakers, for its Producing Lab program.

Film Independent President Josh Welsh not only acknowledges how deserving he feels she is of the academy invitation but also how remarkable the honor is.

“Being in the academy is a big deal. It’s a very exclusive membership of people operating at the top of their craft,” Welsh says. “To have Sue-Ellen — a young, talented, Black, female artist — recognized by this organization is so important.”

As she’s busy developing her first feature film, Chitunya still feels a strong connection to her roots in Zimbabwe and, in particular, that old drive-in theater where her love of cinema began.

“I always feel my uncle’s presence when I’m in a theater,” she said. “Every time I watch a film, I feel like my uncle Andrew is sitting right next to me, laughing and crying.”

With his food distribution business facing the uncertainties of the COVID-19 pandemic, René Diaz (B.B.A. '87) still finds ways to serve customers and those in need.
As told to Bobbin Wages Eastwood
Tanya Washington Hicks has felt the impacts of the coronavirus first-hand. It will forever change the way she helps educate future generations of lawyers.
As told to Tony Rehagen