A background role for Shahreen Elahi (B.S. ’18) in “Spider-Man: Homecoming” brought a glaring lack of Muslim representation in TV and film front and center.
Interview by Torie Robinette Durham

In the summer of 2016, Shahreen Elahi, then a rising junior at Georgia State, learned the movie “Spider-Man: Homecoming” was filming in Atlanta and looking for extras. A lover of comic books and superheroes, she applied and landed a part as a student at Peter Parker’s (Spider-Man’s) Long Island high school.

But when the directors emailed her the scenes, something stopped her: She’d have to change clothes in a women’s locker room. As a Muslim woman, Elahi didn’t feel comfortable undressing on camera, so she decided to speak up.

When Elahi took her concerns to the directors, they didn’t dismiss her like she had feared. Instead, they got an idea: They asked if she’d wear a hijab for her scenes. Elahi doesn’t don the traditional garb in her day-to-day life, but the chance to represent Muslim women in a major American movie — a rare sight — thrilled her. Little did she know she’d be the very first extra to wear a hijab in a Marvel film. 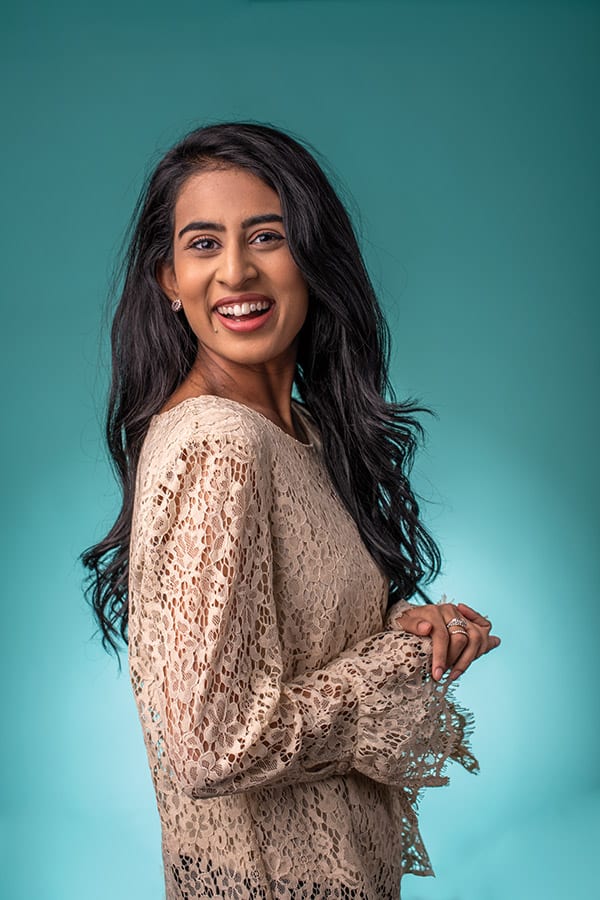 Since the movie was released, big things have happened for Muslim actors in the Marvel franchise. British-Pakistani actress Zoha Roman played the hijab-wearing main character in the sequel, “Spider-Man: Far From Home,” and Disney+ is expected to release “Ms. Marvel,” the first Marvel Studios series centered on a Muslim character.

Elahi reflects on the gravity of her role and the impact it’s had on Muslim representation in Marvel films.

How did your faith factor into this role?

What was crazy is the filming overlapped with Ramadan. Balancing those two schedules was the hardest part of it all. During the month of Ramadan, we go to the mosque to pray every day between 8 p.m. and 1 a.m. We also fast from about 5 a.m. to 8 p.m. It was super hot in Atlanta, and each scene takes so long to film. We’d have breaks with catered food from fancy restaurants, but I couldn’t eat or drink anything.

Then there was a house party scene the directors decided they wanted me in, but it was filming at a time when I was supposed to be in prayer. I ended up staying at the mosque, so I did miss out on a few scenes.

I was also in a gym class rope-climbing scene, and they wanted me to wear shorts. I had to explain to the directors that when wearing the hijab, one wouldn’t show her arms or legs bare. [Only one’s feet, hands and face can be exposed.] I ended up wearing leggings under the shorts.

Did you have any memorable interactions with the actors?

Actually, yes. It’s hilarious because it was totally accidental. Somehow, Tom Holland, who plays Spider-Man, heard me say I was thirsty — this was while I was fasting and couldn’t drink. He came up to me out of nowhere, told me he was concerned about the heat and the long hours, and offered to get me some water. I had to tell Tom Holland, “No!” I couldn’t believe it. The one
time I got to talk to him, I turned him down.

You don’t wear the hijab regularly. How did you feel about wearing it in the movie?

By wearing it, I thought I’d find myself explaining the religion a lot. Surprisingly, I didn’t have to, except when I couldn’t do certain things in some of the scenes. I think people were kind of hesitant to ask me about it because they were unfamiliar.

There were other extras on the set wearing yarmulkes and turbans, and I was really happy to see that because you would probably see other religions and ethnicities represented in a real American high school.

Did you realize the significance of being the first person to wear a hijab in a Marvel film?

I didn’t think it was a very big deal while I was on set, but after the movie came out, I remember friends who didn’t know I’d been an extra remarking that they couldn’t believe they’d seen someone wearing a hijab in the movie. It was so cool to see people so happy about someone who was just in the background.

There’s a severe lack of representation for Muslims in film and TV. And when we are cast, Muslims are usually portrayed as outsiders struggling to fit in and find their identity in the Western world. It’s a very common stereotype. Muslims need to be shown not just as taxi drivers but as normal American people, like high schoolers. After all, we are American.

What does it mean to you to see Muslim women leading in “Spider-Man: Far From Home” and “Ms. Marvel” — both following your role?

I remember growing up and not having anyone I could relate to on TV or in movies. Seeing these actresses take on these parts has helped me understand the impact of my own role. It’s incredibly humbling.

I think stories are the greatest tool for education, and we need Muslim voices in stories out there so that Muslims and people from other marginalized groups know they’re being seen, heard and valued.

You graduated from Georgia State with a degree in neuroscience in 2018. What are you doing now? Do you see any more acting in your future?

I’m working as a clinical research assistant at Children’s Healthcare of Atlanta, which I love. I focus on sports medicine, looking at knee injuries in kids and studying the long-term effects and improvements associated with reconstruction surgery.

I would like to continue with my research and possibly go back to school, but I’m just trying to leave doors open and take opportunities as they come. I haven’t done any more acting, but I am definitely not opposed to it. I think it would be awesome.

While this baseball season may have been thrown a curveball, Georgia State’s new baseball coach Brad Stromdahl — a former assistant coach for the Panthers — is excited about the program’s future.
By Austin Birchell (B.A. ’20)
With Kell Hall out of the way, construction crews are nearing completion on the first phase of the greenway, Georgia State’s future gathering space at the center of the Atlanta Campus.
By Benjamin Hodges (B.A. '08)
Author Tom Chaffin (B.A. ’77) digs deep into the past to uncover some of history’s most intriguing stories.
By Michael Davis (B.A. '03)
Researchers in the School of Public Health are helping stabilize Georgia families affected by substance abuse.
By Jennifer Rainey Marquez