Roughly 40 years ago, Sandra Day O’Connor made history as the first woman nominated to the U.S. Supreme Court. Time Magazine’s “Man of the Year” was given for the first time to a non-human, the computer. Mobile phones were introduced to the U.S. market, MTV was launched, the first cases of HIV/AIDS were being reported, DNA testing emerged – and the World Wide Web had yet to make its debut.

The early 1980s also marked the beginning of a new era in Atlanta’s legal landscape. Ronald J. Freeman Sr. (J.D. ’85) remembers sitting in on a hearing in 1981 at the State Capitol regarding the support for a new law school in Georgia.

“I was very impressed with the passion and persistence of Dean Ben F. Johnson Jr. (Georgia State Law’s founding dean),” Freeman said. “I believed this would be an excellent environment for me and my legal career.” 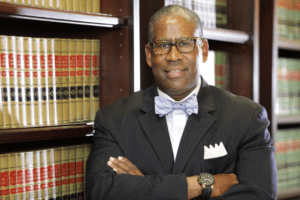 Ronald Freeman (J.D. ’85) serves on the College of Law’s board of visitors.

Johnson and others had been advocating for an affordable, high-quality law school that offered evening classes and part-time enrollment, which would open up a path for students who may not have been able to pursue a law degree otherwise – therefore broadening and diversifying the field.

In 1982, Georgia State University College of Law welcomed 200 Juris Doctor candidates to the new school’s home, the first floor of Georgia State’s Urban Life building—just a short walk to the State Capitol, courts, and numerous law firms. Back then, GSU was more of a community college rather than the regional powerhouse it has become, and the feeling of being pioneers fostered a close-knit community.

“We were very excited to be trailblazers,” said Freeman, a managing member at Johnson & Freeman, LLC. “I was very close to most of my classmates, and we stay connected.”

The college’s six professors led thoughtful discussions about prominent topics of the time.

“We spoke frequently about redistricting in Georgia,” said Freeman, who was the first president of the school’s Black Law Students Association, which is now named after him. “We also discussed the inequality of women and minorities as it related to access to education, quality homeownership, and wealth.”

For students like Sylvia Caley (MBA ’86, J.D. ’89) who chose law as a second career, Georgia State Law hit the mark. She enrolled the same year the late Marjorie F. Knowles became dean at the College of Law. Knowles was also the 17th woman in U.S. history to serve as dean of a law school. 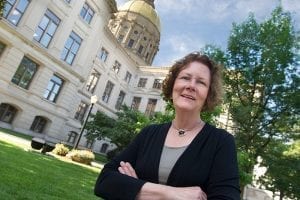 Sylvia Caley (MBA ’86, J.D. ’89) retired after 11 years as the director of the Health Law Partnership (HeLP), a medical-legal community collaboration among Children’s Healthcare of Atlanta, the Atlanta Legal Aid Society and the College of Law, and the co-director of the HeLP Legal Services Clinic, which she helped found.

“That was a big deal,” Caley said. “It was a very positive experience to have a woman of her gravitas leading the law school forward.”

“We were very proud,” Caley said. “It was one of the early events that helped to build the Georgia State Law brand.”

Under the leadership of Knowles, the College kicked off the 90s by receiving full accreditation from the American Bar Association in 1990.

The decade was one of extraordinary transformation. The Berlin Wall and the Soviet Union had fallen, and the Internet and mobile phones were changing how we communicate. It was the era of the Gulf War, Rodney King trial, four nominations to the Supreme Court, Dolly the cloned sheep, Matthew Shepard, Bill Clinton’s impeachment, the Oklahoma City bombing, and the school shooting in Columbine.

1996 was especially significant for Atlanta as the city hosted the summer Olympics.

“I was in class with doctors, accountants, engineers—they added an interesting dimension,” he said. “My fellow students and professors were enormously influential in my way of thinking and changed my thought process and my understanding of a lot of things in the world.”

The students were determined to show the law school could hold its own, even with more established ones in the region.

“We wanted to prove that we belonged,” Perez said. “[The school] was really gritty, but one thing that has been a huge factor for the school’s development was that the city and law firms took a vested interest in seeing the law school thrive and grow, and so students had great internship and job opportunities.”

By the time Perez graduated in 1992, the college had grown to 617 students with 35 faculty members, and admission applications exceeded 2,200 for 180 open slots. 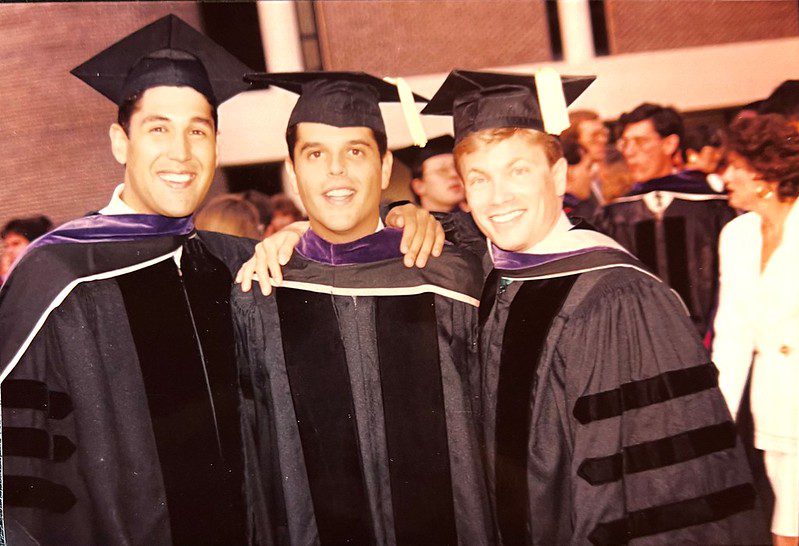 As the college soared in stature, so did its number of programs and academic offerings. Caley had returned to the school as a supervising attorney and adjunct faculty member in 1990 and became one of the founders of the Health Law Partnership (HeLP), and later the HeLP Clinic.

Since then, the school’s health law program has grown into a nationally recognized powerhouse, now consistently listed among the top in the U.S. News & World Report rankings.

Experiential learning in the new millennium

The health law courses were a big draw for Jerri Nims Rooker (J.D. ’03), chief international operations officer at Haggai International. She enjoyed the “a-ha!” moments that would occur when a real-world scenario or concept was explained and examined during class.

“This occurred regularly, during discussions of everything from health insurance regulation to the ethics of embryonic research,” Rooker said.

The new millennium ushered in plenty of real-word discussions. Students in the 2000s experienced the Sept. 11 attacks and Iraq wars, Hurricane Katrina, stock market crashes and a recession, and the election of the nation’s first Black president.

The late Supreme Court Justice Ruth Bader Ginsburg visited the campus in 2003, just after the College celebrated its 20th anniversary in 2002 with 672 students and 40 faculty members.

As it became more diverse, Georgia State Law continued to foster a connected and caring community that aimed to be inclusive and considerate. 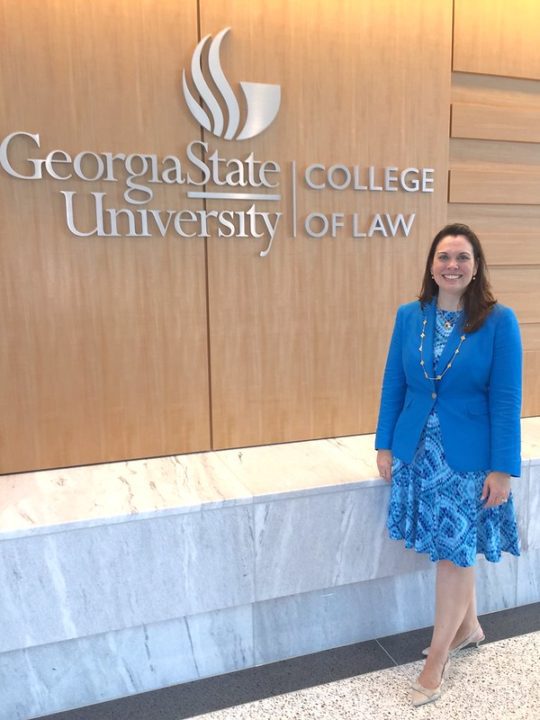 Jerri Nims Rooker stands in front of the Georgia State University College of Law sign at the ribbon cutting for the new building in 2015.

“The culture at Georgia State Law furthered relationships among people with diverse personalities, beliefs, and professional interests, and its graduates benefit from it far into the future, both personally and professionally,” Rooker said.

The College was committed to developing well-rounded graduates and offering more opportunities outside the classroom to build practical legal skills.

“The law school was astute in recognizing the emerging data on the benefit of law students having opportunities to learn through experience, and intentionally included experiential methods in existing courses and created new clinics and experience-based courses to better prepare students to enter ‘real-world’ legal practice,” said Rooker, who was the associate director of Georgia State Law’s Center for Law, Health & Society from 2004 to 2011.

‘Supercharged’ in a new home

As Georgia State Law flourished in the new century, it needed a bigger home for its growing student population that could also showcase all it had to offer.

Under the leadership of Dean Steven Kaminshine, in 2015 the college relocated to a new $82.5 million state-of-the-art building. 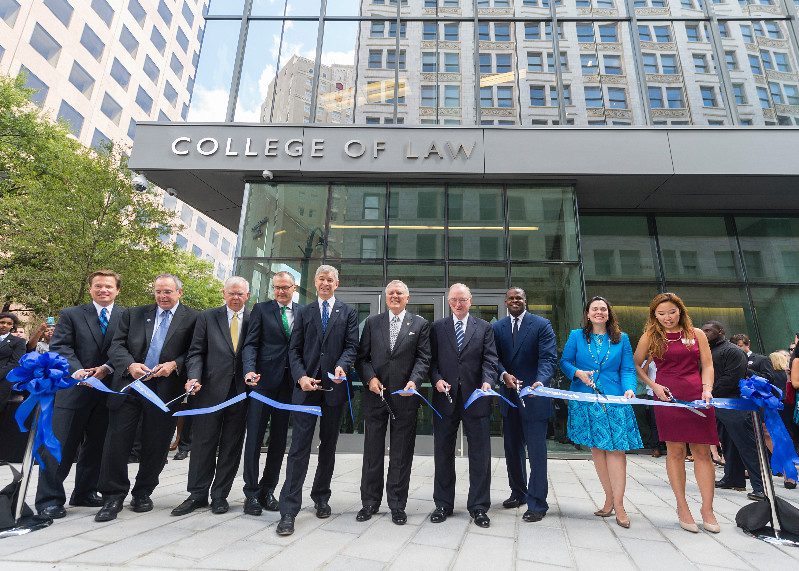 College of Law Ribbon Cutting Ceremony at 85 Park Place in 2015.

“On that day, our external appearance more accurately reflected our internal excellence,” Rooker said. “We were no longer the best kept secret in legal education – we were front page news!”

The move to the new building “supercharged everything,” Caley said.

“Every day I went to work I felt energized walking in the front door,” Caley said. “I think we became an increasingly important member of the legal community with that move. It added a special sheen to the law school being in that building.”

The building’s new technology along with upgraded facilities,paved the way for new opportunities. Pierce Hand (J.D. ’16), attended classes in both Urban Life and Park Place, said one special moment was when the Supreme Court of Georgia held oral arguments in the school’s Ceremonial Courtroom. 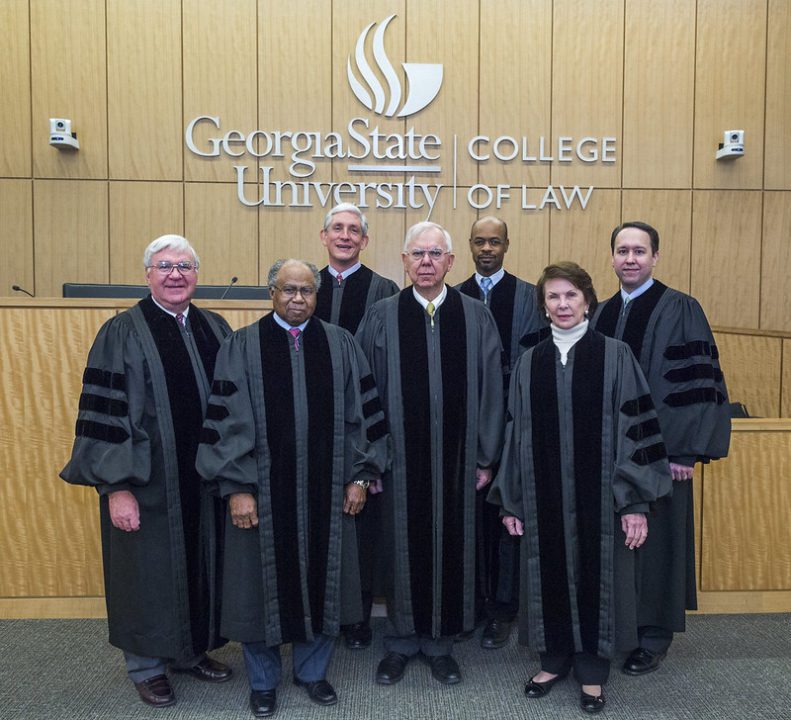 But even in a “glamourous” new building, the heart of Georgia State Law remained the same—a community of faculty, students, and staff who are courageous, committed, and curious. 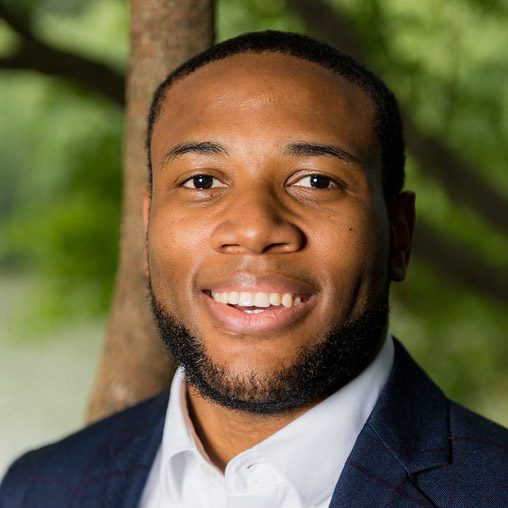 Hand, a senior assistant district attorney in Fulton County, said the school was an amazing place to have conversations about topics being litigated at the time, such as Obergefell v. Hodges.

“You could really dive into issues that are impactful for people and have thoughtful conversations with other students in a really civil manner,” he said. “My passion for helping folks predated law school but it certainly was empowered when I was a law student and [had] the opportunity to intern at Lambda Legal. That had an impact on me and certainly pushed me to my work at Atlanta Volunteer Lawyers Foundation for folks who can’t afford legal representation as well.”

With phenomenal professors and staff at the helm, Hand said Georgia State Law has strengthened the Atlanta legal community by cultivating students who are practice ready when they graduate.

“I felt very well prepared as a writer, as a legal researcher, and as a practitioner when I graduated,” Hand said. “Law firms and nonprofits who serve folks love Georgia State students because they know they are hard-working and ready for practice.”

The future of legal education

With an alumni community more than 6,000 strong, Georgia State Law has made a significant impact in its 40 years as an innovative and forward-thinking institution committed to equity and inclusion.

“From a criminal defendant receiving a fair trial, to a piece of legislation protecting a disadvantaged population, to a newly formed company leveraging its intellectual property, to a ministry expanding its international footprint to provide life-saving resources, to a patient receiving coverage for a needed treatment, to thousands of more examples, Georgia State Law is having a life-changing and life-improving impact far beyond its geographical namesake,” said Rooker.

Georgia State Law now offers 12 degree programs of study and a variety of experiential learning opportunities through 18 research centers and clinics, and has more than 70 full-time faculty members. It has been recognized as one of the “best value” law schools in the nation, and bar passage rates have remained high.

Freeman said the achievements of the school and its students make him proud to be an alumnus, and he sees an ongoing bright future for the college.

“Georgia State Law will continue to be that legal beacon of light in Atlanta,” Freeman said. “I envision GSU will continue to change the face of downtown Atlanta and be a major player to encourage economic growth in this region,” he said.

Rooker believes the college will continue to shape well-rounded lawyers who are thoughtful.

“As thinking and policy-making becomes more siloed in our society, Georgia State Law has the opportunity to continue stewarding the cross-pollination of theories and the strengthening of diverse voices across a spectrum of viewpoints,” she said. “This was a hallmark of my experience as a Georgia State Law student, staff member, and Alumni Board Officer, and I envision the school continuing to champion this unique approach in an increasingly divisive culture.”

Dean LaVonda Reed became the seventh dean to lead Georgia State Law in July 2021. She plans to build on its legacy.

“It is indeed an honor to carry on the legacy established by the law school’s six former deans and many faculty members whose vision and dedication created a school that is affordable and continues to provide unique access to the legal profession and access to legal representation,” Reed said. “I am eager to build upon this legacy with an incredible community of scholars, students, staff, alumni, and friends of the College of Law who support our mission and programs with great generosity. I know Georgia State Law will continue to make its mark on legal education and the profession in the next 40 years and beyond.”